2020: a Year of Historical Significance

* The Jakarta Post published a shorter version of this text. This is the original version as submitted by the author. 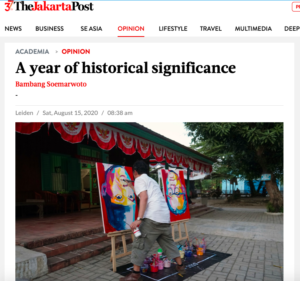 On 17 August 1945, Soekarno-Hatta proclaimed the independence of a new nation state, the Republic of Indonesia. They did it on behalf of the peoples, the inhabitants of the vast archipelago, whose ancestors had lived in societies rich of cultures and knowledge. Independence from what?

The preamble of the constitution of the new republic states:

“freedom is truly the right of all peoples, and therefore colonial domination throughout the world should be abolished, because it is contrary to the principles of humanitarianism and justice” (Mohammad Hatta’s translation in Journal Asian Survey, March 1965, pp. 139-143).

Independence means freedom, that is free from colonialism which by its very nature is inhumane. After the foundation of the VOC in 1602, for more than three centuries colonialism violated the human rights of the peoples living in the archipelago known today as Indonesia.

At gunpoint, the peoples were denied the rights to enlighten themselves and determine their own course of development. They were oppressed, exploited and enslaved to satisfy the greed of a tiny kingdom located 12.000 kilometers away. Colonialism was indeed a project of greed which had revealed an ugliest form of human behaviour.

The project was not without resistance. The opposition had erupted into many wars of decolonization, spread over the archipelago over the time span of the more than 300 years of colonial domination. Streets in Indonesian cities are given names to remember leaders of the resistance and thereby the lives lost in the bloody purges by the colonial ruler.

Remarkably, in the beginning of the 20th century, when the colonial ruler introduced the ethical policy, inserting elements of humanity such as education into the society to co-exist with colonialism, another form of resistance emerged: nationalism. Hatta identified it as a nationalism which was not determined by identical origin, identical language or identical religion, but formed by a common destiny and purpose.

The peoples of various ethnicities, being oppressed by one foreign entity occupying their lands, became aware of sharing the same destiny and purpose. This was awakened by enlightening messages transmitted throughout the archipelago by the privileged few, who were allowed to follow education up to the tertiary level. It is a nationalism based on intellectuality, leading to intellectual activisms marked by significant milestones such as Boedi Oetomo in 1908 and Soempah Pemoeda in 1928.

This year, a significant event 100 years ago was commemorated. On 3 July 1920, the Technische Hoogeschool te Bandung (THB) was established in the city of Bandung as a tertiary level of engineering education. It indeed resounds the ethical policy. The speeches delivered during the opening of THB were loaded with universal and timeless values of humanity.

“any young persons of any origin are equally welcome, but let us express our wish that it may serve to salvation of the indigenous population… the first step towards the future, where the children will be educated in their own land, to qualify not for subordinate low-paid roles, but like the soldiers of Napoleon who can become a field marshall, and further climb the ladder up to the highest rank of administration of their land”.

“it is the motivation and personal calling that determines which role the graduate engineer will take, whether in the construction, economic, or societal sector. It is not up to the university to decide. The university lets the best in the students come into life and develop, makes them realized of their capability, fills them with the urge, to perform at the service of mankind.”

It cannot be a coincidence that Ir. Soekarno, a THB graduate of 1926, ultimately led the peoples of the archipelago to freedom on 17 August 1945. A noble service to mankind, indeed. Almost immediately, however, the sovereignty of the newborn state over its territory was challenged, again, by a yet bloody, but this time unsuccessful, purge attempt originating from the very same greed that apparently survived the devastation of the second world war in Europe.

This year, the 75-year jubilee of the independence day will be commemorated by the people of Indonesia. It must have caught the attention of the Dutch King Willem Alexander who made a 4-day state visit to Indonesia last March. The King has made the visit a remarkable one, by offering an apology. Apology for what?

The apology concerns a period of 5 years from 1945 to 1949, a tiny snapshot of the whole time span of 350 years of colonialism. While in the Indonesian society this apology was almost unnoticed, the reactions in the Netherlands have been overwhelming, from many layers of the society. A sense of approval, relief, cynicism and anger were all present in the reactions.

Interestingly, the apology has awakened a new voice in the Dutch society, a voice presumably suppressed before, acknowledging the cruelty of colonialism, and therefore it should be apologized for. Others, including the prime minister Rutte, do not agree with this voice, arguing it is even farther away in the past and difficult to judge with the morals of the present, while there is no demand from the Indonesian side for a digging into the past and an apology.

It is not about whether or not there is a demand, as there was no demand whatsoever from the Indonesian side for the apology by the Dutch King. Colonialism, as Emmanuel Macron rightly put it, is a crime against humanity. There is no lack of academic findings and narratives that support this view. There is no need for extra digging into the past.

The contemporary Dutch has been vocal in condemning human rights violation committed by other nations of the world. While it may be genuinely well- intended, it accentuates the greatest irony in the history of mankind: International Criminal Court sits in The Hague, but the host does not even dare to deal with severe cases of its own past committed during centuries of colonialism.

In the Dutch media, the Dutch King’s apology was reported as a total surprise to the Dutch politics. But, in the wake of anti-racism movement following the tragic death of the American George Floyd last May, which has recalibrated the western norms and values praising the symbols and figures prominent in slavery and colonialism, the apology should be accoladed as an exemplary gesture. It is a small step towards an ultimate apology. That is an apology to humanity for the Dutch 350 years of colonialism.

For the Dutch King to deliver the ultimate apology on Indonesia’s upcoming celebration of independence day, it would be remembered in history as a noblest service to mankind.

The author is a resident of the city of Leiden, the Netherlands.

Complete speeches during the opening of TH Bandoeng, translated in Bahasa Indonesia, can be found in the book “1920-2020: Satu Abad Pendidikan Tinggi Teknik di Indonesia” available at the Google Play Store https://books.google.com/books?vid=ISBN9786029729023