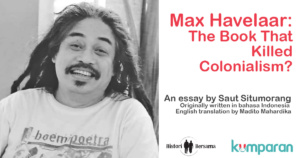 Dutch embassy Jakarta does not want to receive Indonesian relatives

Friday afternoon, March 6, 2020, Dutch embassy Jakarta. Indonesian relatives whose (grand-) fathers were brutally murdered by the Dutch army in 45-49 are asking for a meeting with ambassador Lambert Grijns. On January 31 they sent a letter to Dutch King Willem-Alxander to express their disapproval of his State Visit in March 2020. They demand legal recognition of 1945 and full apologies. They haven’t got an answer from the King yet. The response of the Dutch embassy? “We have no time for you, because we are busy with preparing the State Visit”.

Once again Pondaag and Pattipilohy replied the government in a short letter, stating that they feel disrespected by the government’s refusal to answer their questions properly.

In a letter dated December 17, 2019, the Dutch government writes that the research project on violence (1945-1949) is completely independent and that for that reason they will not address the substantive objections of Pondaag and Pattipilohy. The government does not respond to the proof that shows the direct link between the State and the research team, instead they write that they cannot comment on lawsuits that are still ongoing. The letter denies that the Indonesian translation and promotion of Limpach’s book has been paid out of the 4.1 million euros research budget. Yet, since the first page of the Indonesian version states that NIMH funded the translation, it means that even more government money has been spent.

Pondaag and Pattipilohy sent another letter to the Dutch government, Oct. 23, 2019

In November 2017, Jeffry Pondaag and Francisca Pattipilohy took the initiative to write an open letter with questions regarding the Dutch government sponsored research “Independence, Decolonization, violence and war in Indonesia, 1945-1950”. Now, two years later they sent a second letter, as they feel that their concerns are not taking seriously.

“Proof: the Dutch research project into violence in Indonesia (1945-1950) is neither independent nor equitable”

Round Table Discussion at NIOD

Live streaming of the round table discussion at NIOD, Thursday January 31 in Amsterdam, following the open letter with concerns regarding the Dutch government-sponsored study on violence during the Indonesian independence war (45-49), which was sent to the Dutch government in 2017. (The audio is not excellent but with earphones it works.) Download here the report of this meeting, which was sent to the Dutch and Indonesian government and press on March 23, 2019.