A Visit to the Grave Site of Minke Tirto Adhi Soerjo

I have not visited many cemeteries. I am not able to make many comparisons. Even so, I feel I can say that the cemetery in Blender, Bogor, West Java is an appropriate location as a place of final rest on this earth. It was cool under scores of frangipani trees shading the hundreds at rest here. There was no chance for the sun to even peep through the canopy to bake the earth and dry up the atmosphere. Cool, quiet, peace.

But like so many places in Indonesia, even this cemetery was busy with human activity.  The call to prayer echoed across the cemetery from a nearby mosque reminding the faithful of their duties on earth. The local villagers also used the cemetery for their household activities, for example hanging out their laundry on the cemetery fence.

There were many children playing there. There were people selling flowers that would be placed on loved one’s graves. There were the workers looking after the cleanliness of the cemetery, whose duty it was to fight off the ever forward-creeping grass and. (Indeed, here and there, weeds had conquered some graves, making them their little fiefdom.)

There were five of us there that day: Pramoedya Ananta Toer, the publisher Hasyim Rachman, the editor of Pram’s books, Joesoef Isak, and the documentary film-maker, Gil Scrine, and myself.

“Where is the grave of Tirto Adhi Soerjo?”, asked Joesoef addressing one of the crowd of children that was following us, their curiosity aroused by the presence of two foreigners.

Hasyim Rachman and I bought five little packets of fresh flowers that would be scattered over the grave. “Ya, where is his grave, the grave of this famous person?”, Hasyim also asked the children.

Pramoedya Ananta Toer was silently observing the goings-on, gathering a sense of the atmosphere and keeping tabs on how our efforts were progressing.

“This way, pak”, spoke a child. So our whole group obediently followed behind the little guide, ourselves in turn followed by a growing entourage of other children. On the way we met an old man, a gardener at the cemetery. He had actually retired from this job, but decided to continue to work because there were not enough people hired to do the work.

“They are looking for the grave of Djokomono Tirto Adhi Soerjo?”, asked a teenage boy who had joined the now even larger entourage of children. “If I am not mistaken, it is over there”, spoke the gardener pointing towards the edge of the cemetery.

Our entourage swelled as we headed in that direction.  Hasyim and Joesoef grew more confident as they started to remember their visit here a few years earlier. At that time, they were researching for Pramoedya’s non-fiction biography of Adhisoeryo, entitled “The Pioneer”. Pramoedya, my friend Gil and I walked along quietly, only occasionally whispering to each other – it was a cemetery after all.

We walked passed a grassy patch, not very well maintained. There was a fenced off area with seven graves inside. The grass and weeds had taken over. Without being given any orders, the horde of children started to tear out all the weeds, inside and outside the area of the seven graves. Some also started to sweep the area, including the graves themselves.

So this was the resting place of The Pioneer, Sang Pemula, “Minke”. This family grave site was quite presentable, tiled, although not with expensive tiles. The graves were in a row, with the exception of two, which were next to each other but slightly separated. The oldest grave was that of The Pioneer, “Minke”.

Djokomono Tirto Adhi Soerjo died in 1918 and was buried in Jakarta, and only later in 1971 disinterred and moved to Bogorto be with his family.

“Which is Minke’s grave?” Joesoef, Pramoedya, and Hasyim examined each of the seven headstones. They seemed to know the family tree of that family buried here. Indonesians seem to know these things. And, there it was:

PIONEER OF THE INDONESIAN PRESS

I was moved at that moment. It’s true, yes, my friends say I am a bit sentimental. However, I knew the man buried there quite well as a result of Pram’s creativity. I had translated the four volumes Pram had written in the Buru Island prison camp which were novels telling the story of the life and times of Raden Mass Tirto Adhsisoeryo – the character Minke. I realized, of course, that Pramoedya had taken some poetic license and that they are novels and not histories. But still, the real Tirto Adhisoeryo does come alive for us. There is also the book, The Pioneer, edited by Pramoedya, which contained some original writings by Tirto, short stories, that also help get to the man resting here.  The Pioneerwas published by Hasta Mitra, founded by the three men paying their respects now at this graveside.

Did I really know him all that well, the boy Minke and the man, T.A.S.? Hmm, well, I certainly felt I knew him, and as a friend. And this was where he was resting now.

“Bung Pram, why has his name faded on the headstone?”

Pramoedya looked closely and compared with the others. “Yes, why?”

The writing on the other headstones were clear and easy to read, painted in black. The paint had faded on Tirto’s headstone, with some of the letters having disappeared altogether. If the letters had not been etched into the stone, his name would be illegible altogether

“Does somebody have a ballpoint?”, Pramoedya asked. I gave him my pen, which happened to be a black ink pen, very suitable for rehabilitating the disappeared letters.

Pramoedya squatted and began tracing in the letters. One by one the letters re-appeared spelling out the name of The Pioneer. Pramoedya’s countenance was tense with concentration; his lips pulled tight as he focused.

The four of us stood watching. Hasyim turned to examine the audience that had gathered. There were maybe 15-20 people now, mostly children, but a few adults, including the two gardeners who looked after the cemetery.

“You are also honored to be able to look after and guard the grave site of such a great man as this, a great man in Indonesian history. Tirto Adhi Soerjo. Don’t forget that name. Yes, he has been forgotten by history, by the Indonesian nation. But we have not forgotten. Look there are foreigners too who have come here to pay their respects.” Thus Hasyim opened his speech.

Pram was still carefully finishing his work. The vanished name was indeed long, and the ballpoint was not the most suitable tool for the task. Joesoef and I chatted with the gardener. Gil took photos. Hasyim was still addressing his audience.

“This is new”, said Joesoef pointing to the headstone, “Pioneer of Independence. When we were here last that was not there. . It just said a “pioneer of the press”. We had suggested such a change to one of his descendants, a general. It seems they have added that.” That general, a great grandson of Tirto, now also rested here.

The charcoal was handed to us, but it had turned out that the ballpoint was up to the job.

“Here, Max”, Hasyim called out to me, inviting me to scatter some flowers over the grave. I drew close and scattered the handful of petals over it.

Was I just performing, I thought? Was thus just a photo opportunity? No, the answer came swiftly. I was proud to have known the man buried here and proud too to be here with people as dedicated at Pram, Joesoef and Hasyim.

What an amazing person was Tirto Adhi Soerjo. He could sense that a nation would be formed by history even before the nation itself could become aware of this trajectory. And he just didn’t sit by and watch, this Tirto, the pioneer. He worked and struggled to bring his vision to reality. He was a founder of the Islamiyah Traders Union, and the first native of the Indies to publish a newspaper with a future perspective for his people.

I knew that if we looked at things objectively it wasn’t always a healthy attitude to be so proud about one’s country’s past. One could become lost in the past and become blind to the present and future. And too, the achievements of those that have gone before us are not our achievements. But as I scattered those lovely petals over his grave, I could not stop myself from thinking that if I was an Indonesian I would be proud that my country had had a pioneer, such as Tirto.

Hasyim and Joesoef took turns in scattering the flowers, and then Gil. Hasyim had some of the talents of an ustadzso he then recited a Moslem prayer in Arabic.  We bowed our heads; nobody spoke a word.

Pram completed inking in the full name: R.M. Djokomono Tirto Adhi Soerjo. Hasyim took a turn then to ink in the epitaph.

“We have a new audience”, Pram joked to Gil who was taking photographs. Pram pointed to a small herd of goats that was feeding on grass nearby. We all smiled at the scene.

Pram scattered some petals. His face was silent. What was he thinking?

It was time to leave. There was no point in drawing out this moment, no matter how moving. Pram and Hasyim reminded the caretakers to look after the grave of this very important man. We turned and started to make our way to the cemetery entrance but we all glanced back at least once, drawn to Minke’s resting place for another moment. The little gang of teenagers and children still watched our every move as we left.

“This man has been forgotten by history any by his own nation and people,” Hasyim complained to them one more time.

“Read the headstone. Died in 1918. Soekarno was still a boy at that time. Just imagine: this man was already fighting for freedom when Sukarno was still just a boy. This man is just as great a person as Sukarno, maybe even greater.”

They followed us to the entrance, both the children and the few adults, listening to Hasyim. Hasyim’s exuberance startled them. He was a handsome, imposing man and when he was excited it was a serious matter.

Hasyim lagged behind. “Who here is at high school?” A boy – they were all boys – put up his hand.

“So, then ask your teacher: who was Tirto Adhi Soerjo. And ask him why nothing about Tirto is taught to the students at school. And tell your teacher that this great man is buried here in Bogor.”

Hasyim finally exited the cemetery. Even as he hurried to catch up with us, he still needed to stop and turn and repeat what he had been saying. He wanted to make sure he left behind a message they would not forget: that here in Blender Cemetery, Bogor their laid in eternal rest a great Indonesia, a pioneer in the struggle for freedom and of the press.

A few days later, I received a message from Pramoedya. “What Hasyim told them all at the cemetery – somebody should write about Tirto. National Press Day just passed and we were the only ones who visited his grave.”
— 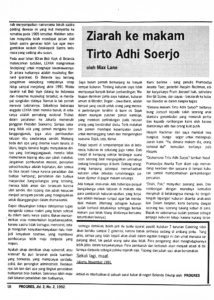 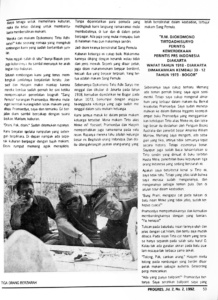 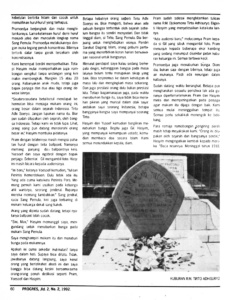 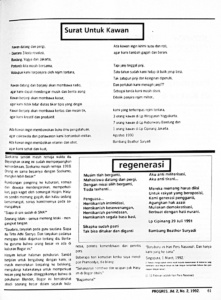