Abu Hanifah: Going Against The Grain, Setting up the Indonesian Educational System

In the brief period that the United States of Indonesia (RIS) existed, Abu Hanifah was setting up the foundation of the Indonesian educational system. He was thwarted by anti-Dutch sentiments and the dissolution of the RIS. 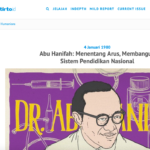 In 1921, Abu Hanifah, who had just graduated from Europeesche Lagere School (ELS[1]) in Bandung, moved to Batavia to continue his studies at STOVIA.[2] The young man from Minang (Sumatra) then graduated and held the Indische Arts title (Indies Medical Doctor) in 1932. Like most klepek – or cleve, as STOVIA students were called back then, Abu was also active in the national movement organisation. He became friends with other young activists, such as Bahder Johan, Muhammad Yamin, and Amir Syarifuddin.

Abu was part of the Angkatan 28 (Generation 28) – those who initiated the Kongres Pemuda (Youth Congress) and gave birth to the Sumpah Pemuda (Youth Pledge). Abu Hanifah was the editor-in-chief of Pemuda Sumatra Bulletin who was active in spreading the idea of Indonesian unity. When the Kongres Pemuda II took place, he was the editor of the Pemuda Indonesia Daily Bulletin which reported the results of the congress.

After he graduated from STOVIA, Abu was assigned as a gynaecologist assistant at Tanjung Morawa, a plantation area near Medan. Not only did he take care of the health of the plantation coolies, especially women, Abu also ascertained many other things while working there.

This is where he witnessed the colonial exploitation and realised that coolies were only seen as means of production. Maintaining their health meant maintaining plantation productivity. In principle, they were slaves bound by colonial laws, such as Poenale Sanctie (Penal Sanction) and Koelie-ordonnantie (Coolie Ordinance).

Hence, Abu and some of his friends from Sarekat Islam Medan demanded the abolishment of the Poenale Sanctie.

During 1934-1940, Abu was assigned as a medical doctor to work in the deep jungle of Indragiri, Jambi. Later, in 1952, he published a novel entitled Dokter Rimbu (The Jungle Doctor) which was written under the pseudonym El Hakim and based on his experiences while serving there.

During Abu’s assignment in Indragiri, he researched several diseases, including malaria and goitre. Abu, who passed away on 4 January 1980 (40 years ago) studied goitre for two years and the result of his research was published in an extensive report entitled “Strauma endemic in de Koeantan Districten (Midden-Sumatra)” issued by Medisch Tribune, the Vereeniging van Indonesische Geneeskundige – now the Ikatan Dokter Indonesia (IDI, the Indonesian Medical Association).

During the period that Abu was working there, he managed to establish some crucial things for the Indragiri people. He founded a hospital, a polyclinic, a school for midwifes, and tried to eliminate malaria. Due to his hard work, he became popular both among local people and Europeans.

However, his growing popularity eventually concerned the colonial government. Even a rumour circulated that he was involved in the communist movement. Because of this, Abu was ordered to return to Batavia. Abu could not refuse that order because they issued an ultimatum if he did not leave Indragiri within three weeks. He mentioned this in his novel, Dokter Rimbu (p. 203).

Following the advice of his uncle, Professor Achmad Mochtar, who was a researcher at the Eijkman Instituut, Abu decided to take his doctoral exam at the Geneeskundige Hogeschool in Batavia (GHS, the Medical College of Batavia). Abu’s habits and productivity in writing contributed to his success in passing the test. Since then, he officially held the Arts title (medical doctor) which made him equal to European medical doctors.

The day after his graduation, Abu was assigned at the Colonial Health Department to serve aboard the Plancius as a medical officer, a military ship under the auspices of the Dutch Navy.

One day, Abu was fascinated when he saw two large warships, Prince of Wales and Repulse, passing before his eyes while this ship was docked at the port of Singapore. The might of those two battleships made the Plancius crew so confident and convinced that Japan would think twice before launching an attack.

Ironically the next day, on 8 December 1941, when the Plancius arrived at the port of Padang, Abu’s fascination vanished in an instant. A radio broadcast informed them of the news that the two gallant warships had been easily destroyed by Japanese bombers.

Then several months later, without any significant difficulties, the Japanese army had succeeded in occupying the Dutch East Indies. Abu’s activities were then paused for a moment.

Abu Hanifah became active again before and during the 1945-1949 Revolution for Independence.

After the Indonesian Sovereignty was recognised and Sukarno being sworn in as President of the Republic of the United States of Indonesia (RIS) on 17 December 1949, cabinet arrangements began. Sukarno and Mohammad Hatta invited Abu, who was then a figure of the Masjumi Party, to the palace. The President and Prime Minister of the new RIS appointed Abu as a Minister of Education, Pedagogy, and Culture.

In his autobiography entitled Tales of a Revolution (p. 333), Abu emphasised that a new country must have a strong educational foundation for its young generation. The future of a new country will be brighter if the foundation of education is healthy and well organised.

After being inaugurated, Abu selected his staff very carefully. Some of whom he appointed were Dutch and some came from the Republiken (Republicans, Indonesians who are supporting the independent Republic of Indonesia.) During his first busy months in office, Abu focused on designing the national educational system.

One of the first steps he took was combining existing faculties spread across Jakarta, Bogor, and Bandung into one entity, namely the Universitas Indonesia. The process, however, did not run smoothly due to several problems.

The policy of nationalising the educational system suddenly caused tremendous technical difficulties in the aspect of knowledge transfer because there were no higher education textbooks that were written in Indonesian. As a result, the development of science in Indonesia was temporarily interrupted.

Another problem that Abu faced was the status of Dutch professors who, during the colonial period, were in charge of teaching important subjects. Their positions as lecturers and researchers were then cornered because of the strong anti-Dutch sentiment, which also involved daily issues, especially regarding the amount of salary. Many lecturers chose to repatriate to the Netherlands or apply for jobs in Europe. Although, many also chose to settle in a country that was then hostile to them.

Abu, who understood their anxiety, then gathered the professors in the main building of the GHS in Batavia (now FKUI) and delivered a speech to ask them to remain in the country. Abu stated that as the Minister of Education, he needed their help to educate Indonesian youths until they were ready to replace their teachers. Abu ensured the professors that he would do whatever in his capacity to help them get through this difficult period of transition.

At the end of his speech, Abu also asked the Dutch professors not to get involved in politics. Abu promised to give them complete freedom in their work as well.

“Now that we have understood each other properly, gentlemen, I would like to thank you for your past work and thank you in advance for our future collaborative work. I express my deepest gratitude for your cooperation,” Concluded Abu (pp. 333-334).

Abu’s proposition was warmly welcomed by the Dutch professors, but at the same time, it also created a new problem. The Republiken responded coldly and even accused Abu of being pro-Dutch. Such suspicion became an invisible wall that blocked any potential collaborative opportunities in any field with the Dutch. Sukarno, unfortunately, was amongst this group.

Because of this speech, several Republiken leaders and teachers’ associations demanded clarification. The Republiken demanded him to dismiss all Dutch lecturers to replace them with lecturers from India, the Philippines, or if necessary, from Arabia. Abu rejected their demand and defended his decision. For Abu, that was the only way to build a solid foundation for Indonesian education.

The former Minister of Education of the Netherlands Prof. Dr. Rutten visited Indonesia in April 1950 to further discuss the cooperation scheme with Minister Abu Hanifah. On that occasion, Rutten also went to meet students in Jakarta, Bogor, and Bandung. In return, Abu Hanifah led a team on a mission to the Netherlands in early May 1950.

In the Netherlands, Abu met Queen Juliana to further discuss relations between the two countries, especially in terms of arts and culture. They also discussed initiativesto bring Dutch and Indonesian youth together in an exchange program so that they can understand each other better.

At the same time, Abu also addressed the members of the Koninklijke Nederlandse Akademie van Wetenschappen (KNAW, The Royal Netherlands Academy of Arts and Sciences) in Amsterdam. In front of the leading KNAW scientists, Abu delivered a speech describing his aspirations about education in Indonesia and his hopes for the Netherlands. Abu reiterated his desire to work with universities in the Netherlands and invited Dutch professors to help in teaching Indonesia’s younger generation.

The KNAW members welcomed Abu’s proposition and agreed to help Indonesia in building the foundation of their national education.

Abu did not only visit the Netherlands, he also flew to Florence, Italy, to lead the Indonesian delegation at the UNESCO Conference in May 1950. Upon his return from Europe, Abu began to prepare a plan to establish a science academy in Indonesia, Just as the Netherlands with their KNAW. In July 1950, Abu also succeeded in establishing cooperative relations in the fields of education, pedagogy, and culture with several countries in Asia.

Because of his activities, a friend came to remind him that he was too progressive and might not last long in the cabinet. Then one day, Prime Minister Hatta received a petition from the socialist student association that expressed their objection towards the policies implemented by Abu. Even his party, Masjumi, disliked his policy and eventually proposed somebody else to replace him.

Even though he realised that he didn’t have much time left, Abu didn’t give up. Abu worked diligently to restructure many universities in Jakarta, Yogyakarta, and Surabaya. Agreements with foreign universities had also been signed and guest professors were waiting to go to Indonesia. Trainings were also held to increase the capacity of teachers in many schools.

Since the beginning of his time in office, he had also initiated to develop the Balai Pustaka. Abu was highly determined to improve the quality of publications, reform the structure and publishing service, and ensure the quality level of reading content for teenagers (Prof. Dr Abu Hanifah, DT. M.E. Karya and Pengabdiannya, p. 60).

The United States of Indonesia was dissolved on 17 August 1950, as did the Hatta Cabinet. All the work plans of the Ministry of Education that were formulated by Abu Hanifah were then abandoned. All cooperation agreements with foreign universities and plans to bring guest lecturers were also being cancelled.

His successor argued, “Foreign culture will badly influence our country and may damage our identity so bad it can destroy our nation.” Abu Hanifah had never heard of such nonsense in his entire life, he believed that such policy may only hinder the development of Indonesian education for decades (Tales of A Revolution, p.357).
—

Abu Hanifah was part of the Generasi 28 who declared the Sumpah Pemuda.