Dutch Minister Stef Blok of Foreign Affairs will have another look at the new government compensation scheme to reconsider whether the restrictions need to be adjusted. The new regulation offers damages to children of executed Indonesians that were shot without trial in the period of 1945-1950. One of the requirements is that children must submit their application for damages within a “reasonable time” (between two years) after hearing about the scheme for the first time. 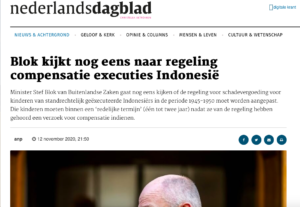 “I don’t really see how this contributes to our reputation or what it contributes to our sense of reputation,” said Sjoerd Sjoerdsma of the government party D66 during the debate of the Foreign Affairs budget in the Dutch Lower House. “Delete this restriction if necessary.” According to him the limitation period “makes it impossible for some of these children to receive justice.”

The compensation scheme was announced last month. Children who can demonstrate that their father was executed by Dutch soldiers without trial during the aforementioned period may be eligible for damages of €5000. There are more than 500 children in the picture who would meet the condition.

Dutch Lawyer Liesbeth Zegveld previously told Dutch TV program EenVandaag that she fears that because of this “reasonable period” many children will not be eligible for damages.
—