The Netherlands recently commemorated the victims of Japanese aggression during World War II.During the annual national commemoration of Aug. 15, 1945, Prime Minister Mark Rutte laid a wreath at the Indisch (Indies) Monument on behalf of the Dutch government. This is rather hypocritical, given the Dutch government has never officially apologized for all the Indonesian victims of Dutch colonial rule and aggression.

In itself the national commemoration of Aug. 15, 1945 — known as the East Indies Commemoration — is an honorable event, as it pays tribute to the many Dutch nationals who died and suffered during World War II in Southeast Asia. Also, it stresses that the war ended in August 1945 when the Japanese capitulated and not in May when the Germans did so in Europe.

This is a much needed reminder, as Dutch imaginations and commemorations of World War II have always centered around the German occupation of the Netherlands and the Holocaust — while the atrocities in the former Dutch East Indies and Southeast Asia have generally been deemed of lesser importance.

Thus, the main Dutch national commemoration on May 4 prioritizes the experiences of World War II in Europe, as does history education in Dutch schools.

Awareness of the horrific events during the war in Southeast Asia has been growing slowly but steadily among the Dutch. This can be attributed to the East Indies Commemoration, but perhaps more so to successful and outspoken writers whose relatives were killed, held in internment camps, or suffered otherwise from the Japanese occupation.

They have indeed made the Dutch imagination of World War II more inclusive by adding previously unknown or ignored experiences and voices of the victims of Japanese aggression.

Ironically, the East Indies Commemoration itself has been criticized for its lack of inclusiveness since it began in the 1980s. Earlier, it had been accused of whitewashing the war by foregrounding the plights of white Dutch or totokvictims.

Subsequently it began to include the war experiences of Indo-Europeans and Maluku people who were stigmatized as pro-Dutch.

And only recently has the Commemoration briefly mentioned the significantly larger group of indigenous Indonesian victims of Japanese occupation. Also, attention is being paid to the bersiap (“get ready”) period following the Japanese capitulation during which rogue Indonesian rebels killed many Dutch civilians.

Ultimately, the various Dutch national commemorations reinforce the flawed notion of the Dutch as victims who fought heroically against “evil” peoples: Germans, Japanese, and indeed, Indonesians.

This is all the more problematic as Dutch soldiers who fought a colonial war against Indonesians in the 1940s are commemorated as well. Among them many soldiers committed war crimes including burning down villages, torturing captives and mass executing Indonesian civilians.

The Indonesian victims of 350 years of Dutch colonial occupation are still not officially commemorated by the Dutch. In fact, many Dutch still see the colonial era as a “glorious” era highlighting Dutch ingenuity and commercial instinct.

Prewar Dutch East Indies is still some idyllic place instead of a territory where the Dutch were involved in oppression, exploitation, plunder, extreme violence and even genocide.

This positive imagination of the colonial era recalls the “white innocence” raised by professor Gloria Wekker: the persistent belief that Dutch are heroes and victims, not perpetrators. Evidence to the contrary causes cognitive dissonance and is discarded, denied or downplayed.

The Dutch government has never wholeheartedly apologized for 350 years of Dutch colonial rule and aggression. It has not even officially recognized Aug. 17 as Indonesia’s independence day. Instead, the Dutch government sticks with Dec. 27, 1949 — the day the Netherlands transferred sovereignty to Indonesia.

Indeed, in 2005 then-foreign minister Ben Bot joined Independence Day celebrations in Jakarta, but afterwards it was made clear this was a “de facto” recognition of Aug.17, 1945.

Officially recognizing Aug. 17, 1945, was — and apparently still is — a taboo for the Dutch government, as it would mean acknowledging that the Netherlands waged war on a sovereign Indonesia. This might offend Dutch veterans who were involved. It might also mean the Dutch government would be held accountable and would face claims and lawsuits from Indonesian victims and survivors — and rightly so.

During his visit to Jakarta in 2005, Bot expressed “regret” for the violence after World War II; it was not an apology. And in 2013 the Dutch ambassador apologized for mass executions in Java and Sulawesi — but only after the victims’ widows took the Dutch government to court. Still, this was nowhere near a full apology, let alone an all-encompassing and unreserved admission of guilt.

The Dutch government likes to see itself as a moral authority, and is always quick to admonish other non-western nations for their mistakes past and present.

But they are reluctant to sincerely reflect on the crimes committed by the Dutch against Indonesians during the colonial occupation. Even as these still impact the lives of Indonesian victims and survivors.

Referring to the East Indies Commemoration, PM Rutte tweeted that the events during World War II in Southeast Asia “remind us that freedom and security are not self-evident and that we should handle these with care”.

But as long as the Dutch government does not unreservedly acknowledge that Dutch colonial rule deprived Indonesians of freedom and security and offer apologies, these words ring hollow.

To make amends, Rutte can start by officially recognizing Aug. 17, 1945 as the day Indonesia became independent from the Netherlands. In doing so, he would explicitly respect Indonesian sovereignty and agency regarding independence.

Such a statement would implicitly acknowledge that the Dutch military operations in the 1940s were indeed acts of war against an independent Indonesia and not — as is the dominant narrative in the Netherlands — a matter of the Netherlands dealing with insurgents in its territories.

And finally, it would force the Netherlands to reconsider this overly positive self-image of Dutch people as heroes and victims only, which would rebuke the notion of Dutch moral and cultural superiority that has gained strength in recent years with the rise of white nationalist and white supremacist rhetoric in mainstream Dutch politics.

The writer is a lecturer in media and culture in the department of media studies at the University of Amsterdam. 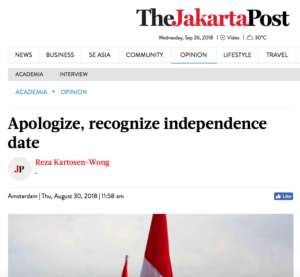