Jazirah Al-Mulk, At the End of the Golden Era of Spices

The land can be smelled before it can be seen. From more than ten miles out to sea fragrance hangs in the air, and long before the bowler-hat mountain hoves into view you know you are nearing land. (Nathaniel’s Nutmeg) 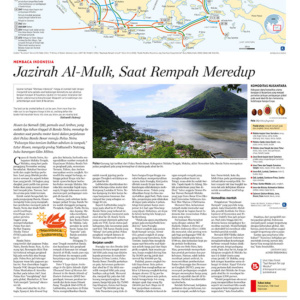 Ambonese Husen La Samadi, 28, who has resided in Banda Neira for the past three years, stared at the land during our journey by motorboat from Banda Besar Island to Neira Island. “The land can be smelled before it can be seen,” Husen said, quoting an excerpt from the prologue to Giles Milton’s Nathaniel’s Nutmeg.

The weather was friendly in Banda Neira, Central Maluku regency, Maluku, that day in late November. The sun was shining brightly and the wind was breezy. The sea, on which we were journeying by boat, was crystal clear. In shallow areas, the white sand and schools of fish dancing around the seabed could be clearly seen. However, the aroma of nutmeg could not be smelled that day.

Husen has lost count of how many times he has quoted to Banda visitors the book that tells the story of Nathaniel Courthope and the struggle for a nutmeg monopoly among the colonial powers. Courthope was a British officer who defended Run Island from an onslaught of attacks by the Dutch East Indies Company, or the VOC, in the 17th century.

Banda Neira, comprising the islands of Neira, Banda Besar, Run, Ai, Gunung Api and Rozengain (nowadays Hatta), was famed as a producer of nutmeg and mace. Run Island was proof of the islands’ past glory. The British forces gave Run Island to the VOC in exchange for Manhattan Island in North America in 1667. As Run Island “disappeared” from the world map, Manhattan in New York became the “heart” of the US economy.

In the early 16th century, the Portuguese, Spanish, British and Dutch forces fought against each other to take control of the Maluku Islands’ spice produce. Banda Neira produced nutmeg, while Ternate, Tidore and Ambon were clove centers. The commodities were so valuable that European seafarers risked their lives in months-long voyages to find and reach Maluku. Through persuasion, bribery and violence, they attempted to monopolize the region’s spice trade.

However, long before European forces ever set foot on the islands, traders from China, Gujarat (western India), Turkey, Persia and Japan had established their presence in Banda Neira. It was they who brought Banda Neira’s nutmeg to Maluku. As they journeyed westward home, the Banda nutmeg that they carried became pricier and more legendary.

Middle Eastern traders called Banda and the surrounding islands Jazirah al-Mulk, or the land of kings. The name is derived from the presence of many kings in the region.

Peter V Lape, in Archeology in the Spice Islands: Eight Thousand Years of Human Settlement in the Banda Islands of Eastern Indonesia (2013), argued that findings of ceramic pieces and coins from China’s Sung Dynasty (960-1279) in Labbateka, an ancient village on Neira Island, indicated that Banda was part of China’s trade network since at least the 10th century.

Labbateka is believed to have been located a few hundred meters from Lautaka village in Neira. The former village is nowadays just an expanse of weed, much of which is 50 centimeters tall.

Like Labbateka, which was lost to history in the 17th century, Banda Neira’s golden era as a nutmeg producer ended in the 18th century. Banda Neira, which was led by a governor in the VOC era, had its status reduced to a regency and then a district – a status that remains today. It was not just Banda that disappeared from world maps. Other spice islands in the region suffered the same fate.

Poengky van den Broeke, 60, and his wife were sorting nutmeg seedlings at their home in Lontor village, Banda Besar Island. Once sorted, the seedlings are delivered to a buyer. The nutmeg plantation owner, a descendant of parkenier (landlords) from the 17th century, chose to sell nutmeg seedlings as he said they were more profitable. Selling nutmeg and mace was less profitable. During harvesting, the price of nutmeg can plummet from Rp 100,000 per kilogram (US$7.53) to just Rp 75,000 per kg.

The region’s famed nutmeg, which the Europeans chased centuries ago, Poengky said, could no longer enter European markets nowadays due to its aflatoxin content being higher than the safety limit. The fungi-produced toxin can trigger heart disease. In the past, nutmeg was dried for up to three weeks, but nowadays the local farmers only sun-dry the nutmeg for four or five days before selling it. As a result, the water on the nutmeg has not completely dried and fungi can grow.

“There is no effort to help the local nutmeg farmers improve conditions,” Poengky said.

Clove farmers have similar stories. Anwar, 51, a clove farmer in Mount Gamalama, Ternyate, could only sigh when he told of the small difference between the cost of harvesting cloves and the selling price. During harvesting, the price of cloves can plummet from Rp 100,000 per kg to only Rp 50,000 per kg.

This was despite the fact that harvesting cloves was costly. A clove tree can yield around one-and-a-half 22-kg sacks of dry cloves. However, between five and six men, at a daily cost of Rp 150,000 each, are needed to harvest one tree. This excludes meal costs.

“Maluku used to be famous for its spices. But the golden days have passed. Its traces are now gone. Only suffering is left behind,” said the Maluku Spice Board’s expert Max Marcus J Pattinama, who is also an ethno-ecology professor at Ambon’s Pattimura University.

Max’s statement is similar to MC Ricklefs’. In his book A History of Modern Indonesia Since c.1300, he wrote that the important value of spices to the VOC’s trade was diminished after the emergence of textiles in the 1700s, which was followed by coffee in the next period.

In the New Order era, Max said, the government gave special attention to agriculture and farming produce. However, mismanagement resulted in the downfall of local farmers. He cited the forming of the Clove Marketing and Buffer Agency (BPPC) that monopolized the clove trade by applying equal prices to various places in Indonesia, despite unique regional characteristics.

In the reform era, agriculture and farming policies, including those related to spices, seemed to have been set aside. The government, he said, was more focused on infrastructure and socio-political development. Spice farmers could not improve by themselves as there was no special policy to improve their standard of living.

The experience of the “Spice Islands”, which had its golden era and then diminished, said Institute for Development of Economics and Finance (Indef) researcher Imaduddin Abdullah, could serve as a lesson. So far, Indonesia only exported raw commodities. This extractive policy model resulted in low added value for produce.

Bernard HM Vlekke, in his book Nusantara: Sejarah Indonesia (Nusantara: A History of Indonesia), said that the biggest profit in the spice trade was enjoyed not by the farmers but by foreign traders. In the 16th century, the price of 50 kg of cloves in Maluku was merely one or two ducats (a currency based on gold and silver). In Maluku, the same amount of cloves was priced at 10 ducats. The Victorian ships that first took cloves from Maluku to Europe in the 16th century enjoyed a 2,500-percent profit.

“Such economic management models that rely on commodities make it difficult for us to catch up with other countries,” Imaduddin said.

So, what should we do? “The key is that government policies should encourage innovation and the government should be able to process commodities,” Imaduddin said.
— 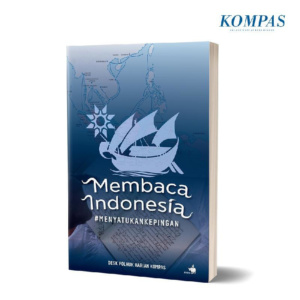