A hidden mass murder in the Dutch East Indies

Why is the mass murder of Dutch people in the Dutch East Indies (1945-46) so underexposed?

Volkskrant August 17, 2015 – By: Louis Zweers (He completed his doctorate degree based on a research on the roles of the media during the Indonesian Independence war, 1945-1949.)

After the Japanese capitulation and the proclamation of the Republic of Indonesia in August 1945, a chaotic situation emerged. From autumn 1945 until spring 1946, during the so-called Bersiap period thousands of defenseless civilians were brutally murdered by unregulated Indonesian forces.

The hatred of the young Indonesian revolutionaries, encouraged by Japanese propaganda and indoctrination – but also out of anger about the pre-war colonial repression – was mainly projected on Dutch (Eurasians) but also Ambonese and Chinese who were considered to be pro-Dutch.

Human rights violations
Moreover foreign historians (as William Frederick) pointed out the genocidal nature of this act. Only later Herman Bussemaker and Willy Meelhuijsen, Dutch historians and witnesses themselves, wrote their books about Bersiap. These publications got relatively little attention. It is ironic that the Netherlands has never been concerned with these human rights violations.

Besides, there are a very few images from these violent outbursts. And without images these horrible tragedies remain unnoticed. At the time Dutch newspapers wrote articles about the violence, without photos, mainly based on British sources. Dutch photographers and journalists were barely present. In the photo archives there are images of victims who were later found in mass graves. And there are also reports of survivors. The last eyewitnesses are very old.

These war crimes mostly took place in remote areas on Java and Sumatra, but also in urban enclaves that were protected by the British. The Dutch troops did not yet have permission from the British interim administration to land on Java. Recent studies (as Dr. Abdul Wahid) estimated the victims around thirty thousand, including thousands of missing. Survivors kept silent about their experiences and their pain was never acknowledged.

One example is the story of the Dutch Francken family who lived at a company in the mountains of East Java. This family history is described by Inez Hollander in her book ’Verstilde stemmen en verzwegen levens’ (Hushed voices and concealed lives). During World War II father Francken died in captivity. The other members of the family barely survived the Japanese camps. Shortly after the Japanese capitulation the Red Cross made a photo of the skinny sisters Joke (13) and Willy (15) Francken in the open air kitchen of the overcrowded camp Banjubiru on Central Java.
The family Francken was transported in convoy to the harbor of Surabaya in East Java. On October 28th, 1945, the convoy with women and children was attacked by Indonesian militias near the Brantas Hotel in Surabaya. Over one hundred Dutch (Indo) women and children, including their British Indian Gurkha companions, were killed. Joke and Willy Francken were massacred in the attack. Son Harry and his mother survived the massacre and were repatriated to the Netherlands.

Also the Chinese population had to endure suffering. Near Batavia and also the rural areas near Medan were ethnic purged by Indonesian militias. The British colonel Laurens van der Post describes in his book ’The Admiral’s Bab’ a tragic incident in the small Sunda Islands where Indonesian forces massacred the Chinese community of about fifteen hundred people.

Van der Post observed that the Komodo’s ate the decaying bodies of the victims. He could never forget this event. These incidents took place before Dutch military set foot on Javanese soil. The British warned the Dutch that ‘the genie was out of the bottle.’ The call for independence could not be stopped anymore.

Van der Post feared that Dutch military interference would result into widespread violence and interpreted this event as a symbolic warning for the, in his eyes, unforgiving Dutch.

Only in March 1946 the first Dutch military arrived. After that, the violent explosion with an estimated 150,000 Indonesian victims (including those who got killed due to internal Indonesian conflicts) really began. Meanwhile the Dutch-Indo victims of the Bersiap were forgotten. 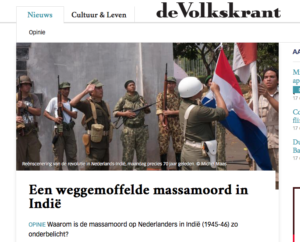