As a colonized country, Indonesia is entitled to ask compensation from the countries that used to occupy it. From Japan, we received war reparations. Meanwhile, the Netherlands only expressed their regret.

Once, during a visit to Japan, Hermawan Kartajaya, (Indonesia’s leading marketing expert) jokingly asked Kikuchi-San from JVC: “How much is approximately the Indonesian “donation” given during Japanese occupation which contributed to the construction of numerous smooth paved roads in Tokyo?” With a smile, Kikuchi-San replied that Japanese people, especially the young generation, have bitter memories regarding the effect of the country’s militarism in the past. “Therefore, Japan has the moral obligation to pay war reparation to all countries that it once occupied” said Kikuchi-San, which is written in the book“Marketing Klasik Indonesia”(“Indonesian Classic Marketing”).

In mid-1951, the United States initiated a meeting in San Francisco to discuss the Peace Treaty and War Reparation with Japan – known as the Treaty of San Francisco, which officially ended World War II. Several countries, including Indonesia, were invited. The ruling Sukiman-Suwirjo Cabinet was divided, especially between the Indonesian National Party (PNI), which saw no real benefit in reparations; and the Masyumi-party, which saw the meeting as a way to remove the [diplomatic] obstacles between Indonesia and Japan. In his book “Pemikiran dan Permasalahan Ekonomi di Indonesia dalam Setengah Abad Terakhir (1945-1959)”(“Thoughts and Economic Problems in Indonesia during the last Half Century (1945-1959)”, Hadi Soesastro stated that: “Finally the government took the middle way, they decided to go [to San Francisco] if there is benefit for Indonesia.”

Then Foreign Minister Achmad Soebardjo departed to San Fransisco. Yet on September 7, 1951, a few hours before signing the agreement, the Indonesian cabinet hadn’t reach consensus on the matter. The cabinet eventually voted with ten ministers supporting the Peace Agreement, whereas six ministers voted against it.

On January 20, 1958, as a follow up on the Treaty of San Francisco, the Indonesian government signed the bilateral agreement that included the part about the reparations. Among others it covered the war reparations of US $ 223 million and the Japanese willingness to invest in Indonesia with long-term loans of US $ 400 million. The Peace and War Reparation Agreement was approved by the Indonesian Parliament on March 14, 1958 and officially announced on March 27, 1958.

Overall, Nishihara added, the war reparation projects had more negative than positive impact [on Indonesia.] Many projects did not receive enough funding to be completed due to the inflation. The War Reparation also led to corruption.

Nevertheless, Japan was at least willing to pay compensation for the 3,5 years of their occupation [of Indonesia], what about the Dutch who stayed much longer? Ironically, it was Indonesia that had to pay compensation to the Dutch. The Indonesian money was used to support the [post-war] reconstruction of the Netherlands.

This was a consequence of the Roundtable Conference in The Hague, the Netherlands, which dictated that in exchange of handing over the sovereignty to the United States of Indonesia on December 27, 1949, Indonesia must pay the colonial debt to the Netherlands. The final payments were eventually estimated 4,5 billion guilders, although initially the Dutch demanded 6,5 billion guilders.

As such: “the loss of the Indies did not bring disaster to the Netherlands, as they continued benefitting from their former colony even though the colony had been granted independence,” wrote Dutch historian Lambert Giebels in his article “De Indonesische Injectie” (the Indonesian Injection), which was published in De Groene Amsterdammer, January 2000.

After paying about 4 billion guilders between 1950 until 1956, Indonesia unilaterally cancelled the Roundtable Agreement. Later, during the early years of the Suharto Regime, the Inter Governmental Group on Indonesia (IGGI) was set up and headed by the Netherlands. Their hidden agenda was to demand [a second] settlement, related to the earlier nationalization of Dutch companies by the Sukarno government, which was estimated US $ 2,4 billion.

Giebels did not understand how the Netherlands could do that to Indonesia. In relation to Suriname, another former colony, the Dutch agreed upon a settlement for the slavery, they paid about 50 billion Euros after Suriname gained its independence on November 25, 1975. Although the number was considered insufficient. “Suriname was entitled to the settlement of 50 billion Euros,” said the Surinamese economist Armand Zunder in an interview with Philip Smet on Radio Nederland Wereldomroep, July 2, 2010.

Zunder compared Suriname with others cases. The Netherlands, for instance, also asked compensation from Germany after World War II. Germany paid more than 120 billion Euros to the Jewish community. The International DiversCités Organization forced the French parliament, and also other European countries including the Netherlands, to pay compensation to its former colonies and for their role in the transatlantic slave trade. In 1999, The Africa World Reparations and Repatriation Truth Commission was formed in Africa. It was an international investigation commission that aimed for compensation. Since, according to international law, slave trade is a crime against humanity.

Yet, what about the Netherlands [in relation to Indonesia]? Apart from paying compensation, the Dutch government in 2005 only expressed their regret for the colonization and military invasion. They eventually accepted [‘de facto’, not legally] August 17, 1945 as the Indonesian Independence Day, instead of December 27, 1949.

At that time, through the Minister of Foreign Affairs Hassan Wirajuda, the Indonesian government decided not to ask for compensation. The reason: there are more ways to use the Dutch “regret momentum” to improve the diplomatic relationship between both countries, which was considered more beneficial towards Indonesia. Such as trade relation, investments, and social culture. In this way the Indonesian people keep their dignity, as we are not exploiting past sufferings to enrich ourselves.

Indonesia has been too kind towards the Netherlands.
— 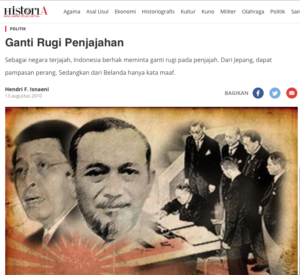