When I used to flip through our family albums as a child, I often came across this photo. It is my father and I on Bonaire in front of a house for enslaved people. I remember that I often wondered: why did we take this picture? As I saw it, you take pictures of fun moments and nice places. As a child I probably did not know a lot about the history of that place, but it did not seem ‘fun’ or ‘nice’ to me. Once a bit older I could relate more to why this photo was taken. In the intervening time I have come to understand that slavery is far behind us, to where my father – in contrast to our ancestors – could walk around freely with his daughter. A scene to capture.

I will come back to this later. 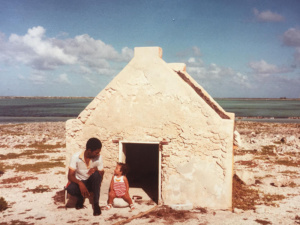 Let’s first take a look at June 25, this year. Methodological research on the impact of slavery on the Dutch economy has finally been conducted. The newspapers are full of Pepijn Brandon and Ulbe Bosma’s article. Extensive reports are made about the importance of it. And guess what? The impact was much greater than we thought. In the year 1770, 5,2 percent of the GDP of the Dutch Republic and 10,36 percent of the GDP of the province Holland was based on slavery. In other words: we, ‘the Netherlands’ acknowledge the extent of ‘slavery’ and thereby, I say it carefully, perhaps also indirectly confess guilt? In any case, we search our own conscience. That much is clear.

Well, because beneath the surface something else is happening. Sure, the magnitude of the impact continuously gets emphasized. But what really sticks [in people’s minds] is ‘the five percent’. Despite the comparison with for example the impact of the port of Rotterdam on the Dutch economy, five per cent does not sound like a lot. Therefore, in a while, when the rest of the information from the articles has been forgotten, and someone states: the Netherlands owes its wealth to overseas exploitation, a counter argument can be: it was only five per cent. This way it seems that 95 percent were obtained ‘legitimately’. And indeed, in an article from the NOS, historian and slavery expert Piet Emmer literally states: “So 95 percent had nothing to do with it. I would say that 95 percent is the cork on which the Dutch economy floats in 1770 and not that five percent.”

What I blame the media for is that they fail to outline the wider context. Or do they? The next day, NRC places a column from Professor of European Studies, Paul Scheffer, in which he explains: “The ownership of fellow human beings was also common in Muslim countries.” His column therefore headlines “Slavery is not just a black and white story.” Dear Mister Scheffer, why would you point to others while living in a country in which institutional racism and neo-colonialism are the order of the day? Then he also wonders: “Why did the moral revolution that led to the abolition of slavery begin in the Western world? And why has there been so much less awareness in the Arab world so far?” What I wonder is: how is it possible that this man gets space?

After all, the context that is not mentioned is that slavery in the East is not included in this study. While there was, in what we now call Indonesia, slavery until the second part of the nineteenth century. Something the average reader of the mainstream media probably is not aware of. And besides, what about the income that came from the colonies after the abolition of slavery? An afternoon in the colonial archives quickly reveals that about ninety percent of the archive material is about the Dutch East Indies and only ten percent about the Atlantic colonies. It is perhaps – hopefully – needless to mention, but I will do it anyway: Dutch colonization was not trade. It was not a case of negotiating, with a fair deal in the end, and if you played it smart, possibly an advantage here or there. No, the Dutch colonization was an occupation with the aim of appropriating valuable resources.

Even at the round table discussion in 1949, which eventually led to the transfer of sovereignty, the Netherlands forced Indonesia to pay 4.5 billion guilders. These were debts that the colonial regime had built up before the war. So just to be clear: the Netherlands occupied an archipelago for 400 years, continuously literally robbing whole shiploads of merchandise, followed by – without any shame – demanding the previously colonized to take over the accumulated debts. And make no mistake: despite these debts the Netherlands made ample profit in the Dutch East Indies. In a 2018 report issued by Alec Gordon, he presented his calculation of colonial profits between 1878 and 1941 in the Dutch East Indies. His estimate is that it amounts to 200 billion contemporary dollars. Realize that the 200-year VOC period that preceded these years was not even included.

Hence, not including this area and the colonial income after the abolition of slavery has a considerable impact on the final bill. The media has the ethical responsibility to point out this context. After all, an average layman that occasionally scrolls through a NOS, nu.nl or NRC app and does not read any further background articles obviously does not realize that Atlantic slavery does not include all slavery. Certainly not when the terms ‘Atlantic slavery’ and ‘slavery’ are used interchangeably in the mainstream media.

My main argument is that by drawing attention to a small part of the larger context while continuously stating that we are horrified by the outcomes of the research, the false image of the Netherlands as reflective and conscience-stricken is being maintained. This discourse exists in a country in which students with a non-Western surname have difficulty finding internships, the established order is predominantly white, and where it is still necessary to explain why ethnic profiling violates human rights. To the point that the Netherlands acknowledges guilt, this is only for a small part of it. That makes it rather easy.

Yet, the media is not the only responsible party. In the report by Pepijn Brandon and Ulbe Bosma there is no clear enough distinction between Atlantic slavery and slavery as a whole. Take as an example the sentence: “By relating our results to earlier estimates of Dutch GDP during this period, we obtain a better picture of the economic weight that the incomes based on slavery represented.” There are more examples in the report. This is confusing to say the least. However, a footnote does state that: “The Dutch East India Company (VOC) was for a long time the most important European power in the region of the Indian Ocean and was frequently involved in both slave trade and (plantation) slavery.” The footnote also states that the East is not addressed because the knowledge about this is still very limited and the research focuses on Atlantic slavery.

Pepijn and Ulbe, I am sorry, but “it is too complicated” is not enough. Certainly not when you are not completely clear throughout the whole text in the use of the term slavery. In a country where predominantly university educated, white men, still determine how we should think about colonial history I think that science also has an ethical responsibility in clarifying the context. I understand that the East did not fall within the framework of your investigation, but to my opinion this means that there is something is wrong in the design. For a complete view, not slavery but colonization should be the starting point.

Back to the picture, I no longer have the illusion that our slavery past is far behind us. Curacao still is forced to tolerate Dutch paternalistic involvement because of agreements made in 2010 in which financial management and supervision were enforced in exchange for debt remission. Hold on… you would think that the Netherlands has built up a considerable moral debt, instead we manage to turn it around.

What I do still believe is that the people who are actually the subject of this debate are increasingly given more space in the public debate. Hopefully in time the academic world also will be forced to change regarding to this matter. In 2020 two studies on the colonial history of Rotterdam will be published. My call to the researchers in question is therefore: make use of this opportunity to do what is right.
—
Linda Lemmen is an independent researcher, filmmaker and chair of Histori Bersama, she currently follows a master in anthropology at the University of Amsterdam