To understand why the Dutch government has decided to fund a large-scale investigation into the Indonesian independence war, we need to acknowledge the political impact of the court cases against the Dutch state.

It is extremely naïve to disconnect the two. This investigation may seem like an honest and brave attempt of the Dutch to finally take full responsibility for colonial atrocities. However, the Dutch government has often expressed its wish to forget about the past in order to move on. Without the ongoing pressure of the court cases, the government would have unlikely financed further investigation.

Yet, instead of acknowledging the groundbreaking role of KUKB (Committee of Dutch Honorary Debt) chairman Jeffry Pondaag, the project leaders sidelined and ignored him. Why is that? I think this research is only a strategic move to convince the outside world that we, the Dutch, are doing great.

Quite telling, for instance, is a government report from 2004 entitled “To forget the past in favor of a promise for the future,” which focuses on the financial agreement of 1966. One year after Soeharto’s rise to power, the Netherlands managed to make a deal to let Indonesia pay for the loss of “its” businesses in Indonesia.

Soeharto was known as more pro-Western than first president Sukarno. Until today, the dominant view in the Netherlands is that, after Sukarno nationalized all Dutch companies in 1957, it was cruel of him to throw all Dutch out of Indonesia.

In this narrative, nobody seems to care whether these colonial “properties” were ever legally obtained to begin with. Take the 2004 report, the conclusion of which reads that it was normal for Indonesia to pay huge amounts of money to the Netherlands, since British ex-colonies had done the same. In this Dutch report, critical questions regarding these payments are simply reduced to untrue “black and white stereotypes.”

Later, in 2008, the Dutch government rejected the Rawagede claims, arguing that the 1966 agreement had ended any financial obligations. Apparently, the Netherlands embraced this agreement (which only benefited them) as a turning point that could not be revoked. Hence, they argued that compensation for Indonesian war victims was out of the question – a remarkable statement, given that the 1966 agreement was intended to guarantee Indonesian payments to the Netherlands and not the other way around.

My personal experience proved this deliberate ignorant attitude. In June 2016, I attended a seminar in The Hague that brought together 10 Indonesian and 10 Dutch young professionals. As a group we were invited to the Dutch Ministry of Foreign Affairs to learn more about the bilateral relationship of our two countries.

During the presentation, government official Hanjo de Kuiper couldn’t stop talking about the future. According to him, it was time to move on; the Netherlands and Indonesia were finally equal partners. He also said that thanks to all the development aid that (among other countries) the Netherlands had paid, Indonesia was no longer a developing country.

Yet De Kuiper also warned that the Netherlands (with its imagined higher moral standards) would remain critical of ongoing human rights violations in Indonesia. Only one slide in the PowerPoint presentation referred to the uneasy topic of Dutch war crimes in Indonesia, showing a picture of Bert Koenders, former Dutch foreign minister, visiting the widows of Rawagede. The picture clearly served to illustrate responsibility, of course not explaining that the state had first rejected the claims. Overall, the elephant in the room — centuries of Dutch human rights violations against Indonesians and the payments to the Netherlands — was ignored.

The question is, what does it mean when a Dutch official presents such propaganda to visiting Indonesians only four months before the study of Rémy Limpach led it to revise the official statement? With his mantra about the future, De Kuiper didn’t seem to think that researching colonial atrocities was a moral obligation for the Netherlands in order to move on.

Interestingly, when the research project was finally launched in September 2017, I saw De Kuiper again. He was sitting in the audience just behind the project leaders. I wondered how the government’s decision to grant new research affected his views. It was hard to imagine that the slides in his PowerPoint presentation drastically changed.

Subsequently, in October 2017, with my foundation Histori Bersama, we organized a discussion at Leiden University. Not only to give a platform to the Open Letter, but also to let KUKB-chairman Pondaag explain what had motivated him throughout the years, which is something the project leaders did not seem very interested in. Pondaag, who has fought for years to create greater awareness in the Netherlands, was not recognized for his vital role that eventually led to this new investigation.

Once again, De Kuiper was in the audience, but Indonesian Ambassador Gusti Agung Wesaka had also made the effort to attend. From their presence alone I figured how political this research actually is.

Recently The Jakarta Post published [about] the Open Letter sent to the Dutch government last November, questioning the investigation. Most of the articles that followed optimistically pointed to the possible benefits, while glossing over the specific concerns expressed in the letter.

From the first news coverage in the Post one would think that the letter suggested that the researchers had to sign a contract, binding them to produce specific results in the interest of the Dutch government.

Yet those who actually read the letter would know that this is not true. Conflicting interests are not a matter of written agreements. I think that none of the participating researchers would sign such a contract. Nevertheless, the lack of it doesn’t mean there is nothing to worry about.

The Open Letter clearly explained what political lines should be considered when trying to understand the grand narrative. Thus it is meaningless that the Dutch Embassy told the Post that the “government does not have a separate agreement [with the researchers],” since the letter did not insinuate that such an agreement existed.

Similarly simplistic is the statement of Dutch historian Maarten Manse (“Examining decolonization for greater understanding”, The Post, Jan. 23) that: “There is no indication yet that the researchers working together in this project are diverted from [the] academic course for the sake of political gains.”

I wonder whether he actually read the Open Letter, which listed all factors behind the problematic point of departure. Good intentions and academic competence are not the main problem. Politics are.
—

The writer is an independent Dutch researcher and founder of Histori Bersama, a multilingual online platform focusing on Dutch and Indonesian perspectives of colonial history. For her master degree at Leiden University, she studied the political consequences of the court cases against the Dutch state. 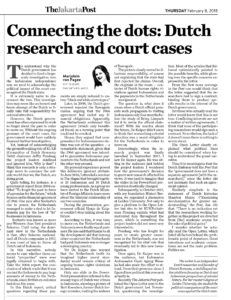