Henk Schulte Nordholt: “War Crime Study: Cover-Up Or Opening Up The Past?”

This article by Henk Schulte Nordholt was published in The Jakarta Post (August 7, 2018).

“On August 1 the Ikatan Keluarga Alumni Lemhannas convened a seminar in Jakarta on the legitimacy of a Dutch research project on the Indonesian Independence War 1945-1950. In a statement the conveners write that they are afraid that the Dutch government supports this research project in order to cover up Dutch war crimes during the Indonesian war of independence and that it seems that cooperation with Indonesian historians from Universitas Gadjah Mada is used to legitimize this effort. This would be a serious misrepresentation of the research project and would also harm the integrity of our Indonesian colleagues in an unjustified manner.

In 2016 the Dutch government decided to finance an extensive and independent research on Dutch military violence during the Indonesian war of independence (1945-1950) and asked three Dutch research institutions – KITLV, NIOD and NIMH – to design a research proposal. The proposal submitted by the three institutes was subsequently honoured. Before that decision was made Dutch Prime Minister Mark Rutte had consulted Indonesian President Widodo who stated that he had no objection to such a research.

The Dutch government has stated explicitly that the three institutes will carry out the research independently, with no involvement whatsoever from the government. The KITLV and NIOD are institutes that are part of the Royal Netherlands Academy of Arts and Sciences. The NIMH is part of the Ministry of Defence, but is an independent institute that carries out historical research and publishes its findings in accordance with the applicable scientific standards. This independence means that NIMH’s publications are not covered by ministerial responsibility. An independent international Scientific Advisory Board has been convened, which will assess the scientific quality of the research proposals and the results during the programme.”
…
Read more: 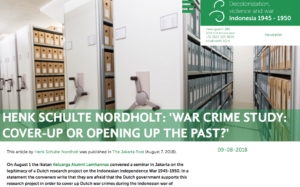