Delete the term ‘Bersiap’ for periodization because it is racist

Decolonization The term ‘Bersiap’ is too generalizing to be used as a name for the period after the Japanese capitulation. According to Bonnie Triyana, the term therefore has a racist connotation. 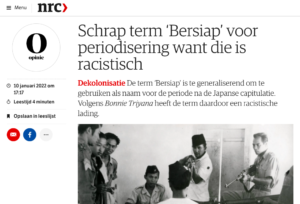 For the exhibition ‘Revolusi, Indonesia independent’, which will open next month at the Rijksmuseum in Amsterdam, the team of curators has decided not to use the word bersiap as a common term referring to the violent period in Indonesia during the revolution (1945- 1950). Why not? What is the underlying problem with this term that many more Dutch people know, in comparison to Indonesians?

When Japan capitulated on August 15, 1945 and Soekarno and Hatta declared the independence two days later , the young Dutch woman Elien Utrecht, born in Indonesia in 1921, was walking out of the Japanese internment camp in Semarang with her mother. Some Indonesians greeted them kindly, but Elien was upset by the many Indonesians who shouted a word, the meaning of which she did not understand. “They screamed the word merdeka, freedom. I did not know that word and did not immediately understand the meaning of the word,” Elien writes in her memoir Twee zijden van een waterscheiding (Two sides of a watershed).

Elien is one of the many tens of thousands of Dutch people who were taken prisoner when Japan occupied Indonesia in early 1942. The description she gives of the situation outside the prison camp gives a picture of how far the Dutch had separated from the Indonesian nationalist political movements that had been growing since then. developed in the 1920s. 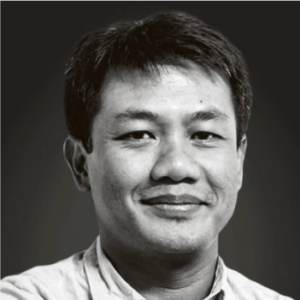 Utrecht describes the violence that hit many internees just after their liberation. They were often the target of the wrath of Indonesians who had a fervent desire for freedom. These young Indonesians often shouted “bersiap!” (Be ready!) as a battle cry. The Dutch who lived through this period speak of the ‘Bersiap period’. A time when Indonesians were possessed and attacked white-skinned civilians, Indo-Europeans, Ambonese, native Chinese, or whoever they considered to be colonial collaborators. But is that image correct?

At the same time, for example, in Banten, West Java, the struggles started. A group of people surrounded the house of district chief Tubagus Mohamad Arsad on August 16, 1945. They demanded that Arsad distribute rice among the people. He refused and in the end Arsad and the chief of police Raden Sukrawadi were lynched by the starving population.

On the north coast of Central Java, just like in Banten, a village chief and a group of aristocrats became targets of anger. The village chief was considered unjust and a devoted servant of the occupying forces.

In Sumatra, the sultanate of Langkat faced a rebellious mob. Tengku Amir Hamzah, a member of a prominent family and a prominent poet, was killed in a people’s court. During the Dutch colonial period, the Langkat sultanate enjoyed privileges from the colonial rulers. From the beginning of the arrival of colonialism, feudalism was seen as a way that facilitated the exploitation of the colony.

These circumstances were portrayed by Multatuli in Max Havelaar as ‘two whips of power’ that whipped the people to bend to the colonial rulers. Historians call these local outbreaks of violence shortly after the Japanese capitulation a social revolution, stemming from a structural tension since colonial times and the Japanese occupation. The same applies to the violence against Dutch citizens after the declaration of independence. They were seen as a symbol of colonialism based on the hierarchy of race and a feudal power relationship.

If we use the term ‘bersiap’ in general for violence against the Dutch during the revolution, it takes on a strongly racist connotation. Even more so because the term ‘bersiap’ always portrays primitive, uncivilized Indonesians as perpetrators of the violence, which is not entirely free from racial hatred. The root of the problem lies in the injustice that colonialism created and which formed a structure of a racism-based hierarchical society that envelops the exploitation of the colony.

In Indonesia, the term “bersiap” is unknown in this context, but there are many other terms used to name various events during the revolution in order to disguise the violence. At the same time, ‘gedoran’ refers to an action by young people in Depok, near Jakarta, who raided the houses of people suspected of collaborating with the Dutch. In Central Java the people speak of ‘geran’ about the time of the revolution and in Banten and part of West Java they know the term ‘ngeli’ which refers to the time when many citizens fled their villages.

The use of the term ‘bersiap’ thus also carries the risk of simplification because it tends to generalize the diversity of facts. Such an attitude becomes the basis of a prejudice, of a crime by association. Just because some people make a mistake, all members of this group have to bear the burden of this mistake.

It is relevant to recall that the Dutch government that wanted to re-occupy Indonesia after the war regarded the Republic of Indonesia as insignificant. The republic was accused of being under the influence of Japanese fascism. And Indonesians were deemed unable to control the situation. Sutan Sjahrir, one of the frontrunners of the republic along with Sukarno and Hatta, has admitted that acts of violence against white-skinned civilians, Indo-Europeans and members of ethnic groups perceived as collaborators with the colonials took place. He described this in a brochure entitled Perdjoangan Kita, (Our Struggle) that was published at the end of October 1945. He condemned that violence and Sukarno, Hatta and other republican leaders also spoke out against it.

As mentioned, violence was quite common during the Indonesian revolution. But there was another factor that contributed to the violent discharge. For that I am introducing here the journalist Rosihan Anwar who was an eyewitness to the revolution. In his memoir Kisah-Kisah Jakarta Setelah Proklamasi (Stories of Jakarta after the Proclamation), Anwar says that tensions rose after word spread about the return of Dutch soldiers together with the Allied army to free the internees from the Japanese camps. Indeed, the Allied army finally arrived in Jakarta on September 15, 1945. Many pemoeda, young warriors, were concerned about the Dutch return. The historical facts indicate that the Netherlands tried to recolonize Indonesia using armed forces.

History is indeed about what has already happened, not about what might have happened. But if you use the reversed facts to look at history, you can ask the question: what if the Dutch government hadn’t followed its passion to rule in Indonesia at the time and hadn’t returned to recolonize Indonesia? It is certain that the term ‘bersiap’ would not be known in the Netherlands now.
—