The University of Melbourne, November 28, 2019, by: Olivia Tasevski 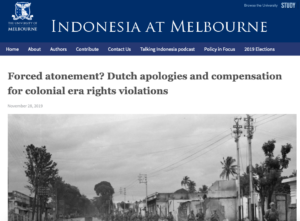 This year marks 70 years since the official end of Dutch colonial rule in Indonesia. While they were in charge, Dutch forces perpetrated egregious human rights violations against Indonesians, including mass killings of civilians.

Unlike many European and Asian colonial powers, Dutch governments have apologised and provided compensation to some families of victims massacred by Dutch forces.

Despite this, successive Dutch governments have been largely unwilling to address human rights abuses perpetrated by Dutch forces in Indonesia unless ordered to by courts and, at times, have sought to impede access to justice for Indonesian victims and their families.
…