The Dutch Court of Appeals dismissed the argument of the Dutch State that the statute of limitations has passed in regard of the cases of five elderly [Indonesian] men and women that claim that their fathers were executed in 1947 by Dutch soldiers during the so-called “cleansing actions” on South Sulawesi, then called South Celebes.

This has been decided by the Court in The Hague today. In another judgement, also handed down today, the Court ruled that they considered it proven that an Indonesian man was tortured in 1947 during Dutch imprisonment in East Java. In this case too, the Court of Appeals lifted the statute of limitations.

During the Second World War, Japan occupied the then Dutch colony “Nederlands-Indië” (Dutch East Indies). After the capitulation of Japan, the nationalist leaders Sukarno and Hatta proclaimed the Republic of Indonesia on 17 August 1945. The Netherlands did not yet recognize this republic. This did not happen until 1949. This resulted in a political conflict at the end of 1945, which led to an armed struggle. Violence was used on both sides. Dutch soldiers have executed Indonesian men without trial (“summary executions”) and violence has also been frequently used during interrogation of Indonesian prisoners.

Children of five executed men have sued the Dutch State and demanded compensation. The Dutch State rejected the claim based on the argument that the actions they have been accused of, took place too long ago. The Court rejected this appeal for limitations and is of the opinion that especially the extraordinary seriousness and the high degree of culpability of the violence stand in the way of limitations.

Certainly, after such a long time there are issues with [finding convincing] evidence, yet this is most difficult for the plaintiffs [the Indonesian victims] – as they are responsible to prove their claim. However, the State itself is responsible for the problems with evidence. At the time, the Netherlands failed to register who was shot or abused and when. The Dutch State did not try everything possible to document this afterwards.

The Court in The Hague found there was sufficient evidence that language differences and social disadvantage had stood in the way of claims being made against the state. Once the obstacles had disappeared, they held the State liable within a reasonable time, according to the Court of The Hague.

The case will first go back to court, which will have to decide whether the plaintiffs in this case are indeed children of the men that were executed in 1947. If that is proven they can claim a reimbursement of living expenses. Both the Court of appeals and the [regular] Court agree that under the applicable law at the time children of executed victims are not entitled to receive damages.

In the other case of which the judgement came out today, the Court of appeals considered it proven that an Indonesian man, after being captured by Dutch soldiers, was tortured because he was beaten with a stick and had a cigarette stubbed out on his head. In this case too, the Court lifted the statute of limitations, and the victim was granted €5,000 in damages.
— 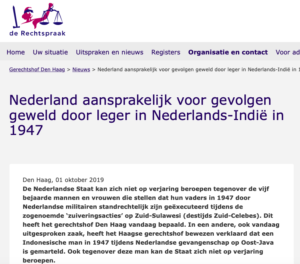