The reason I do not support this Dutch Memorial Day

It’s May 4, Dutch Memorial Day, a day that always makes me feel uncomfortable. My grandfather was forced into hiding as an 11-year-old Jewish boy, and a large part of his family passed away. On the other side of my family there are similar stories, of my great-grandfather who lost his entire family in the Armenian genocide. Therefore, for me, May 4 should be a day of acknowledgement of my ancestors, and yet it doesn’t feel that way. What few people know is that the national remembrance never started as a way to commemorate the victims of the Holocaust. They weren’t even mentioned in the guidelines of the first official national remembrance in 1947. And I quote, “To be commemorated are Dutch troops, sailors, and resistance fighters as well as the Allied forces who fell to liberate our fatherland”, unquote.

Read further below or watch as video message on Youtube, which was part of the Emancipating History series of Pakhuis de Zwijger:


In 1960, the Amsterdam city council still objected to the plan of inviting some Jewish speakers to the Memorial Day ceremony. “Too Jewish”, they stated, and “let’s not give it that much attention”. And while the Christian Sunday’s rest was taken into consideration, ceremonies proceeded unquestioned on the Sabbath. For Jewish, Roma and Sinti victims of persecution, there were no government-sanctioned commemorations, monuments, or war pensions. Admittedly, the first local commemorations in 1946, sober and subdued, were simply a citizens’ initiative to mourn the fallen resistance fighters. There is of course nothing wrong with that. But from the first national commemoration one year later, the ceremonies would increasingly be about restoring nationalist pride. The Netherlands came to be glorified as a resistance nation. Jewish, Roma and Sinti victims have no place in that story because they put a finger on the sore spot of the ineffective resistance the Netherlands had actually staged: during the war, there were many more collaborators than resistance fighters, a fact conveniently swept under the rug. Just like the fact that a disproportionate number of resistance fighters were communists. The Hannie Schaft commemoration of 1951, organized by the Communist Party of the Netherlands, was even broken up, by army and police armed with four armored vehicles with machine guns. The Dutch Auschwitz Committee, founded by camp survivors, was under surveillance by the secret service for years because there were too many communist operatives. In other words, remembrance wasn’t meant for everyone, especially not for those groups that did not fit within the nationalist narrative the Netherlands liked to tell itself.

Therefore, the first expansion in 1961 of the official memorandum of commemoration had nothing to do with victims of genocide or with excluded resistance fighters. The soldiers who had wreaked havoc in Indonesia and Korea wanted their sacrifices recognized, and would be the first in line to receive this recognition. Systematic war crimes were committed in both wars; an estimated 3 million Koreans died, and at least 97,000 Indonesians. None of these dead are commemorated, simply because they were not Dutch. Since 1961, a whole range of countries where Dutch soldiers perished have been added, such as former Yugoslavia, Afghanistan, Iraq, and Mali. Again, only the Dutch soldiers who fought there are commemorated. And they certainly did not always fight on the right side of history. An estimated 1 million Iraqi citizens died between 2003 and 2011, for example, as part of the illegal invasion and occupation lead by America with support of the Netherlands. In other words, May 4 more often than not gives space to perpetrators, while victims are pushed to the side. Add to this a sauce of neocolonial propaganda poured on top: from Indonesia to Iraq, the Netherlands supposedly contributed to, and I quote the Committee May 4 and 5, “stability and safety in the world”, unquote.

Especially shocking is the fact that the dead during WWII among the original population of the Dutch Indies, in other words Dutch people, are also not commemorated. If we look at the Asia numbers of the Committee May 4 and 5, we see deaths in the mere tens of thousands. That is remarkable given that 3 to 4 million people died in the Dutch Indies during WWII. We get an explanation in the Committee’s accompanying booklet, “Counting the Dead”, that explicitly only mentions the victims among, and I quote, “Europeans and Indo-Europeans”, unquote. The Committee hereby adheres to the apartheid standards of Dutch colonialism for the original population in the Dutch Indies, who were treated as second-class citizens and often even enslaved. It wasn’t until 1966 that explicit recognition of the Holocaust was added to the official May 4 memorandum. This is rather late, but it dos show that the memorandum has always been a living document. We should not forget this, now that newer voices are committing themselves to a more inclusive commemoration. Initiatives for refugees who are drowning in the Mediterranean right now, forgotten resistance fighters of African descent, and the millions of dead in the Dutch Indies.

Such voices are easily dismissed as rude by mainstream media and the authorities, and sometimes even criminalized and detained. But May 4 has always been protested. The 1970s and 1980s especially were decades of large-scale protests and alternative commemorations. For example, the German Jewish refugee Heinz Wielek organized a twenty-year long alternative commemoration in the Krasnapolsky Hotel on Dam Square with his May 4 initiative J’accuse. Several organizations joined that were active against racism and Western support for dictatorial regimes in, for example, Greece, South Africa and Spain.

The demonstrations were so successful that in 1979 the Committee amended the memorandum in order to emphasize the current, and I quote, “struggle for freedom and against fascism and oppression”. In stark contrast, in 2017, Eberhart Van der Laan, then-mayor of Amsterdam, restricted the right of protest labeling the commemoration of drowned refugees in the Mediterranean as “distracting”. Thirty years earlier on the other hand, on 4 May 1987, his colleague-mayor Ed van Thijn made an appeal to our accountability, and I quote: “We are not in a slump here, desperate to keep a fading tradition alive. We are here in part because the spirit of the Übermensch still wanders, around the corner and in full openness in countries like South Africa.”

That call for vigilance, which has since disappeared from the May 4 memorandum, is still relevant today. Especially now that undocumented refugees in the Netherlands are roaming the streets without shelter, or have to stay in overcrowded and unsanitary camps in Greece. Investigative journalist Linda Polman describes in her book Nobody Wants Them how German Jewish refugees were banned throughout Europe in the 1930s as well. The similarities between refugee policies then and now are bone chilling.

At this moment, the Committee May 4 and 5 commemorates Dutch soldiers, but not their victims, from Indonesia to Afghanistan and Iraq. It commemorates Europeans and Indo-Europeans who died in the Dutch Indies during WWII, but ignores the millions of indigenous inhabitants who passed away. My only possible conclusion is that the Committee makes a racist distinction, and that is the last thing May 4 should stand for.

But the earlier May 4 protests were not just about who we commemorate, but especially also why we commemorate. If we commemorate without being vigilant about racism and war today, it quickly becomes a meaningless ritual. A pat on the back, that we are so concerned with past suffering. If we truly want to honor our ancestors who passed, then we are vigilant. Then we take our responsibility and we fight against suffering today. That is honorable commemoration, a commemoration that I could support without reservations.
—

Original article in Dutch on One World: 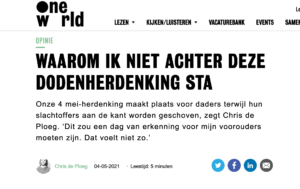