K.U.K.B. Chairman Jeffry Pondaag: “the Indonesians paid for their own damages”

On Wednesday, September 30, the civil court in The Hague announced that they convicted the Dutch State for the beheading of the Indonesian freedom fighter Andi Abubakar Lambogo, who was murdered by the Royal Dutch East Indies Army (KNIL) in 1947. His son Malik Abubakar will receive € 874.80 in damages.

In 2016, Malik filed a lawsuit against the Dutch State with the help of the Dutch Debt of Honor Committee (K.U.K.B.). After four years of litigation, during which two witnesses were heard via Skype in 2019, Malik’s claim has now been approved by the Dutch court. He told Dutch newspaper NRC at the time that he thought the Dutch government should offer general apologies to the Indonesian people: “I want them to be accountable for those acts committed during the colonial period that were in violation of the Geneva Convention”. He also specifically wanted an apology for his father’s beheading.

As a captain in the Indonesian Army (TNI), Andi Abubakar Lambogo led a resistance group near Enrekang, South Sulawesi. On March 13, 1947, he and his men were ambushed by the colonial army. After that Lambogo was beheaded. The name of the Dutch regional commander in Enrekang was Captain Gerardus August Blume.

Although the verdict speaks of “corpse desecration”, it is unclear from historical sources whether Lambogo was already dead when a KNIL soldier beheaded him. There are no testimonies of this event. What is certain, however, is that his head was then impaled on a bayonet and put on display at the local market. The captured Indonesian freedom fighters were forced to kiss the severed head of their leader one by one. The entire population, men, women and children, had to watch. Two of them, Nawa and Bachtiar, were witnesses at the trial.

Even though Malik has won the case, both the court and the Dutch State reject his demand for 30,000 euros in immaterial damages. He only receives € 874.80 in material damages. The latter amount is about the loss of living expenses of Lambogo, based on the idea that if his father had not been murdered, he would have been taking care of Malik until his 21st year (in 1962).

Regarding the claims that are submitted by children of victims, the court admits that the damages that are awarded are conspicuously low. Nevertheless, the court considers this to be fair because according to them it concerns the loss of livelihoods from 70 to 40 years ago in South Sulawesi. The judges argue that most Indonesian men worked there as farmers and in 1947 earned only 100 euros a year. A calculation scheme previously drawn up by the court was used to determine the exact amount of the damages. The lowest amount awarded so far is € 123.48 for one relative. 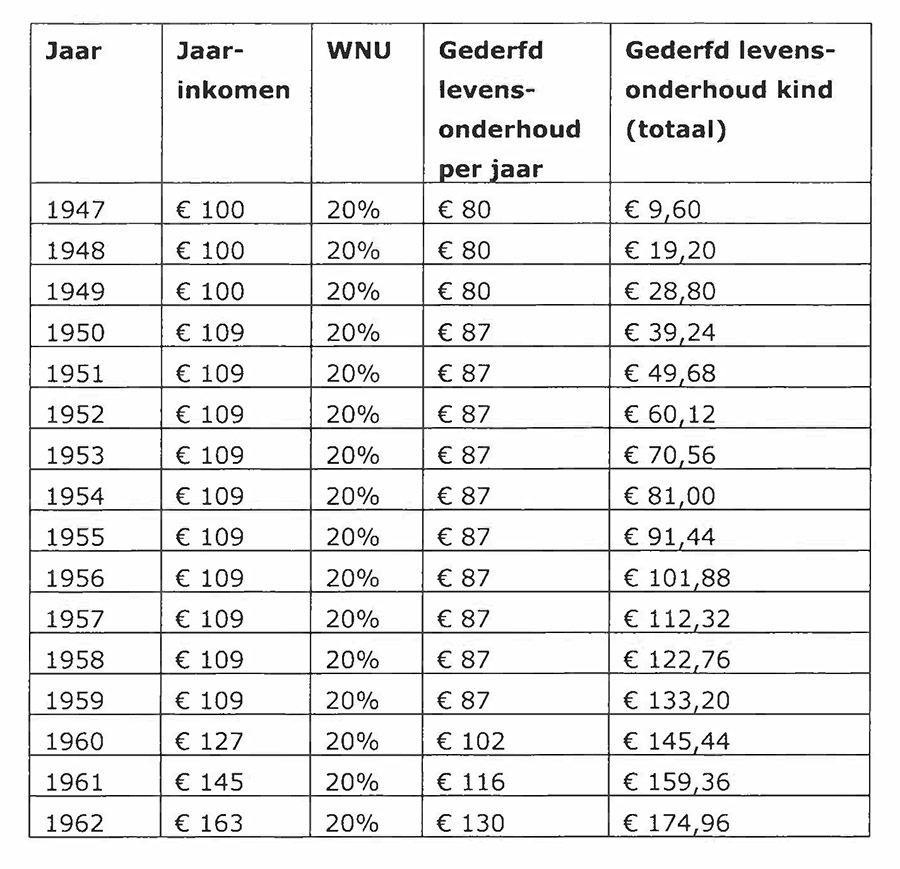 K.U.K.B. Chairman Jeffry Pondaag is pleased that the courts found in favor of Malik, but he finds their point of departure extremely colonial:

“Both the State and the court maintain that Indonesians were not Indonesian citizens between 1945 and 1949. They still maintain that the date of the transfer of sovereignty is the date that Indonesia became independent. The legitimacy of 1945 is not recognized and therefore a surviving relative like Malik is treated as if he was a Dutch subject when his father was beheaded.”

Pondaag finds it problematic that the court, in line with the State, refuses to compensate the immaterial damage. He emphasizes:

“In fact, even if higher amounts of damages were awarded, the Indonesians already paid for their own damages. This is paid out of our own pocket.”

He refers to an article that was published by De Groene Amsterdammer last August and that deals with the enormous cash flow that went to the Netherlands after 1949. According to the authors of this article, this amounts to at least € 103 billion. It means that the damages that the Dutch State is paying now, are part of an inheritance that was stolen by extorting Indonesians after the war of independence.

“The Dutch always take their prosperity for granted. The court does not take into account that farmers in South Sulawesi earn considerably less because of centuries of Dutch exploitation. The legacy is still there. Moreover, the murder of freedom fighters like Lambogo happened because of the enormous Dutch colonial and financial interests in Indonesia. After all, he fought for an independent Indonesia where cash flow would no longer end up in the Dutch treasury. Without taking into account the hundreds of billions of Euros obtained through extortion, the court now concludes that it is fair that the relatives receive a few hundred Euros for the murder of their fathers. It is so colonial!”

The verdict does not mention anything about apologies. It is known that King Willem-Alexander during his state visit to Indonesia last March only apologized for “excessive violence” (or “extreme violence”) and not for the re-occupation of Indonesia itself.
—