A large-scale research program funded by the Dutch government into the violence that took place during the Indonesian independence war between 1945 and 1950 has sparked fear of whitewashing attempts by Amsterdam, which has faced lawsuits over its alleged war crimes during the period.

In September last year, three Dutch institutes kicked off a fouryear research project titled “Decolonization, Violence and War in Indonesia, 1945-1950,” aiming to examine the nature and extent of the violent conflicts that occurred during Dutch military operations in Indonesia at that time.

Even though the program involves Indonesian historians, concerns have been raised over whether the research will be independent and free from political influences, given that the Dutch administration had decided to fund the project to the tune of €4.1 million (US$5 million).

At least 126 Indonesian and Dutch nationals, comprising activists as well as historians, have signed an open letter in which they delivered concerns about the research they fear would be constructed and directed to serve certain interests.

The letter, which was written as the initiative of the Committee of Dutch Debts of Honor (KUKB) chairman Jeffry Pondaag and Fransisca C. Pattipilohy, an Indonesian translator exiled since 1968, was also sent to both the Dutch and Indonesian government in November last year.

“We believe that more research on this period is needed, yet questions arise regarding political influences and decision-making […] We fear that this research project is not independent and believe it leaves out crucial issues,” Jeffry told The Jakarta Post recently.

The research program comprises nine sub-projects looking into Dutch military operations in Indonesia during the period.

Two of the sub-projects, called the Regional Studies and Bersiap (Get Ready) period, will actively involve a team of historians from Yogyakarta-based Gadjah Mada University (UGM), led by Bambang Purwanto and Abdul Wahid.

The Bersiap period spanned the last few months of 1945 and the start of 1946, during which, the researchers claimed, Indonesian militant groups were responsible for widespread violence. It is among the subjects that was given detailed attention by researchers.

However, Jeffry claimed that a study on the Bersiap period had been requested by the conservative People’s Party for Freedom and Democracy (VVD), and the researchers reportedly agreed with conditions set by the government as stated in the letter sent by NIOD director Frank van Vree to the Lower House of Parliament on Feb. 9 last year.

“At the very least, there appears [to be] an uncomfortably close cooperation between the government as funder and the researchers as executors. This raises serious concerns about the scholarly independence of the project,” Jeffry pointed out.

In 2012, the three institutes reportedly submitted a proposal and request for funding to the Dutch administration for the research, which was made, among other reasons, in response to a growing number of narratives on Dutch war crimes, and lawsuits filed by the KUKB against the Netherlands. The Dutch administration, however, refused to finance the project at the time.

It was only after the publication of a study in 2016 by Swiss-Dutch historian and NIMH staff Remy Limpach — whose research concluded structural violence by Dutch armed forces against Indonesians in the late 1940s — that the Dutch government decided to fund the program on Dec. 2, 2016.

KUKB is a foundation that assists victims and survivors in filing lawsuits against the Netherlands for war crimes committed by its army in Indonesia between 1945 and 1949.

It has won several lawsuits, including those related to the Rawagede massacre in West Java, and the Westerling killings in South Sulawesi, in which the Netherlands was held accountable for war crimes.

The country subsequently apologized and provided compensation for the victims.

Project leader Gert Oostindie assured the research would be carried out independently and the government’s role was limited to that of a financial backer, with no rights to decide on its content, direction or conclusions.

He went on to say that the program’s Indonesian counterparts had the liberty to conduct research and publish their own articles and books independently, and the Dutch team would not in any way influence their perspectives or conclusions.

“Surely this is not an endeavor to whitewash colonialism or colonial warfare,” he told the Post.

Due to the sensitive nature of the issue, Dutch researchers continued to update the Indonesian Embassy in The Hague about the program on a regular basis, he said.
— 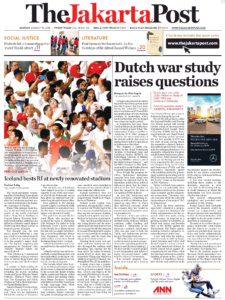