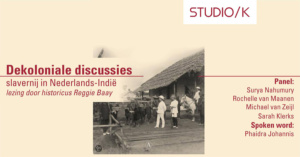 Following Reggie Baay’s lecture we will have a public conversation with persons who consider themselves as having a diasporic relationship with the former Dutch East Indies. To what extent can we discern a critical decolonial perspective amongst Dutch East Indian diaspora? What does such a perspective entail? How can the history of slavery figure in a critical decolonial perspective on the Dutch East Indies and its contemporary legacy? Which terminology should be used, how do we evaluate monuments and street names referring to the period of colonisation, and how does one acknowledge the complex legacy of the coloniser, colonised and RNEI soldiers in one’s own family history? In what way can we assure the inclusion of this slavery history into the narratives put forward by the broader decolonial movement that has arisen in the Netherlands in recent times?

About the keynote speaker

Reggie Baay is specialised in colonial and postcolonial literature and history. He published various books on the Dutch East Indies, such as De Njai and Daar werd wat gruwelijks verricht. Currently he conducts research into the history of Dutch slavery in Asia.

The entrance fee is based on suggested donations ranging from 3 euros for lower incomes, 5 euros for students and middle incomes and 7,50 euros for higher incomes. There is also a possibility for purchasing a combi-ticket with vegetarian & Indonesian food for 15 euro’s. All the donations will be used to cover the expenses made to realise this program. A limited number of places is reserved for people with no income. Should you wish to make use of this arrangement, please do not hesitate to send an email to programmering@studio-k.nu.

This event is part of Studio/K’s School of Critics programme, which consists of monthly workshops, discussions or film screenings on critical or little-known subjects. This discussion is organised by Mariska Jung together with Studio/K and supported by Keti Koti Maand, Histori Bersama, Decolonial Network former Dutch East Indies and BAMM.

Studio/K values to facilitate public debate on otherwise controversial themes, but does not necessarily share the opinions voiced by invited speakers or organizers.