The Jakarta Post, 23 January 2018, By Maarten Manse, Leiden, the Netherlands

The Indonesian-Dutch project entitled “Decolonization, Violence and War in Indonesia, 19451950” has caused an uproar. This research project on Indonesia’s fight for independence is being executed by researchers from three Dutch institutions and Gadjah Mada University in Yogyakarta.

On Nov. 27, 2017, a group of academics and activists published a letter to express concerns about the objectivity of this project. They fear that it might be compromised and influenced by the Dutch government, which provides the entire fund of €4.1 million. This group also calls for a more prominent role of Indonesian researchers in the project. Finally, they claim that Dutch colonial history prior to the war and the Dutch colonial mentality at the time of the war as well as its traces in modern-day society, should be problematized.

The concern of these people is understandable and must be heard. Their contribution to the historical debate is valuable. After all, it is important to ensure that scholars can execute their research unhampered at all.

Nonetheless, it is not true that the funding itself has any effect on the research output. Scientific research in The Netherlands is nearly always funded (indirectly) by the government, but executed by scholars in research institutes and universities. Funding research, however, does not necessarily entail influencing the research output. If this was the case, then nearly all university projects would be fundamentally flawed.

Unfortunately, the debate on Dutch colonialism and colonial war is sometimes shrouded by heated arguments and opposing opinions. Such opposition rarely lead to fruitful discussion. The objections expressed on Nov. 27 would be much stronger if they had been based on the results of the research project.

However, these are not known at the moment, as the project has not yet published them. Instead of assuming biases among the parties involved in the project, it would be more conducive to await the interim results.

To me these results would not so much bear significance for relations between Indonesia and Netherlands, or the acknowledgement of each other’s perspectives on shared history, but, in more general terms, about how a colonial regime acted toward resistance. It has no political, but academic importance.

A recent strand of historical research into the complexities of colonialism shows awareness on dealing with colonial thinking and stereotypes. There are plenty talented historians from Indonesia, the Netherlands and elsewhere who are perfectly capable of looking beyond such stereotypes and know how to frame the colonial past in much more observant terms.

Old-fashioned historiographies of the Indonesian-Dutch colonial past revolve around misjudgements and incomplete understandings of colonialism.

We need to pay heed to the objectors when they claim that traces of the “colonial mindset” of the 1940s are still found in modern day society.

Indeed, this is exactly why colonial history has often been so sensitive. Cooperation is the most important cure against such prejudices.

As a side note, my own re-search on colonial Indonesia shows colonialism is seldom centralized. Instead, it often consists of multiple, sometimes conflicting, interests. The Dutch colonial presence has had many different motives, elaborations and effects in the distant corners of the Malay Archipelago.

Furthermore, colonial policies as framed in The Hague or Batavia never corresponded to policy implementations on the ground. It is because of all these differences that we should be careful in making universal claims about Dutch colonialism in Indonesia throughout the past centuries.

Dutch involvement is believed to curtail the Indonesian perspective on history, but in fact both parties need to cooperate to unravel the full range of historical actors and interests. Cooperation between historians from the Netherlands, Indonesia and other countries is sophisticated enough to guarantee the independence of all involved parties.

In carrying out research, academics should have none but a pure scientific objective. They should always be granted complete academic freedom by any government or funding institution involved so that research can continuously be assessed by the highest academic standards of integrity.

There is no indication yet that the researchers working together in this project are diverted from this academic course for the sake of political gains.

In contrast, I am confident that the researchers of the Dutch institutes and Gadjah Mada University aim for academic integrity. If they abandoned such standards, the inter-national community of historians, sociologists, legal scholars and the like would take notice immediately through peer re-view.

The search for nuances of the war conflicts with propaganda can be easily recognized by other scholars when the first project results are published. After all, the project aims to by-pass opposing Dutch and Indonesian discourse, as Indonesian historian Prof. Bambang Purwanto recently stated in this newspaper.

In conclusion, the “decolonization” research project has enormous potential. This is the first time the Indonesian war for Independence can be lifted out of its problematized context by including multiple perspectives and voices based on inter-national cooperation and a multitude of sources.

This may result in a much wider understanding of the war and help us transcend old-fashioned opposition.

It is essential for this re-search to remain autonomous and free from political intrusion. If history is a debate, I truly hope the debate about the Indonesian war for Independence can be continued with sound arguments and mutual understanding. Therefore, it should not be used as a political instrument.

The writer is a historian at Leiden University, the Netherlands.
— 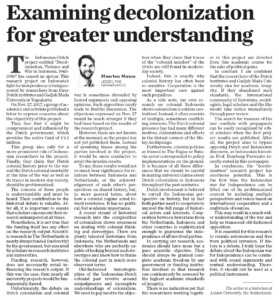