It is not easy to fight for [justice] in cases that are more than 70 years old. However, many families who fell victim to the atrocities committed by Westerling, assisted by the Komite Utang Kehormatan Belanda (KUKB, the Dutch Debt of Honour Committee), tried to hold the Dutch government accountable for these “sins” through several court cases. 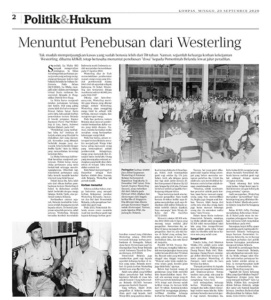 At times, La Muha (81) seemed to frown. He was trying to listen to the interpreter who was translating the judge questions from Dutch to Indonesian. On Tuesday (15/9/2020), La Muha became a witness in the online trial between Santa and the Dutch government at The Hague Court.

La Muha was required to answer a series of questions that the judge repeatedly asked. He was required to confirm that Santa is Iabu’s son. Iabu was the victim of a shooting incident carried out by the Dutch army under the leadership of Captain Raymond Pierre Paul Westerling in Lisu, Barru, South Sulawesi in 1947.

“The fight that involved Iabu? It all started when the selected people were told to point out those who were involved in the so-called rebellion. After that, those who were pointed out and the one that pointed at them were being separated from the crowd, they were ordered to fight against each other. Then Iabu fought with Beddu Tjolle,” said La Muha who explained the [Dutch] court the chronology of Iabu’s unfortunate death.

La Muha had difficulties in answering the questions. The judge often repeated the same questions over and over again, which made him confused. Besides that, there were also problems with the slow internet connection, making it difficult for the interpreter to carry out her duty.

Iabu was one of the thousands of victims of the mass murder committed by Westerling’s troops in South Sulawesi. Iabu was executed at the orders of the Dutch army after he lost the fight against Beddu Tjolle.

Based on historical records, the Dutch tried to return to Indonesia after Japan surrendered to the allies. Under the leadership of several army officers, including Westerling, the Dutch tried to seize back its former colony even though Indonesia had declared its independence on 17 August 1945.

Westerling, also known as the Turk, ordered the mass murder of the people who were being accused of revolting during 1945-1949 in many parts of Indonesia. In South Sulawesi, Westerling and his soldiers allegedly massacred about 40,000 people in 1946-1947.

Quoted from historibersama.com, Westerling had an unusual modus operandi known as ‘the Westerling method’ where he forced the locals to gather in an open space, meanwhile searching for weapons and interrogating them.

In the first phase, the Dutch army went to search for the rebels based on a list of names that they had compiled beforehand. In practice, however, they detained people based on the information gained from the locals.

In the second phase, the interrogation got worse. The local people then were ordered to point out who were the rebels amongst them. Furthermore, the people who were being pointed out and the one who pointed them then were ordered to fight each other. The person who won would survive whilst the loser executed on the spot. Iabu died because of this atrocious method.

Nowadays, South Sulawesi annually holds a commemoration on 11 December in honour of those 40,000 Victims. However, Westerling has never been put on trial by the Dutch.

For decades, the people of Indonesia that fell victim to the atrocities committed by the Westerling troops tried to demand two things from the Dutch government: apologies and damages.

The Dutch government paid damages to many families of victims in the same year. The Netherlands gave ten widows of the victims of Westerling €20,000 or Rp296.7 million.

The parties who were involved in prosecuting the rights of victims of Dutch war crimes in the past were the Komite Utang Kehormatan Belanda (KUKB, the Dutch Debt of Honour Committee) and lawyer Liesbeth Zegveld.

Recently in March 2020, the court in the Netherlands paid damages to Andi Monji (83), whose father was executed by the Dutch army in Suppa Village, South Sulawesi. The damages Andi received was Rp175 million. Apart from Andi, there were eight widows and three orphans who have also received damages in the range of Rp2.2 million to Rp63.8 million. This verdict came after the trial lasted for eight years.

“I’m grateful for the court’s ruling. I was 10 years old when I was forced to witness my father being executed by Dutch military after first being heavily beaten. I was crying,” said Monji, quoted from The Guardian (27/3/2020).

According to the KUKB records of 2012-2020, 31 cases were won without court trials. Meanwhile, there were around 15 cases that were won through court trials. At the moment, there are two ongoing cases in South Sulawesi, namely the case in Lisu, which involved Iabu, and one case in Amparita.

The KUKB researcher Yvonne Rieger-Rompas admits that it is not easy to fight for cases that are more than 70 years old. Many of the witnesses had either passed away or settle in different or remote areas. “Finding witnesses is not an easy task because apart from the distance, the road conditions are not good as well,” says Yvonne.

There are also other problems, such as the large number of locals in the interior who are not yet properly registered in the population data. For example, on one occasion it was written on the person’s identification card that he was born in 1979, whilst his age was more than 70 years old. As a result, this sort of problems plays a role in disrupting the identity verification process of the families of victims to the Dutch government.

On the other hand, it is admirable how the locals are still able to remember those unfortunate incidents. Therefore, one way to prove the truth of the victim’s story is to bring witnesses to testify in court.

“For instance, to prove that the claimant is the victim’s widow we have to find people who can verify it, the same counts for the children of the victim. Yet, the testimony may not only come from one or two people, we have to find several people and that takes a long time,” Yvonne says.

In the case of Santa against the Dutch government, for example, La Muha was a substitute witness. The KUKB had provided another witness who could confirm that Santa was Iabu’s son; unfortunately, that witness became unavailable because of serious health problem due to the old age.

“The impact of this incident on my family was very severe because our family fell apart. All of my relatives have left, one went to Java and two others have disappeared,” says Andi.

Andi continues to explain that the families who were victims of Westerling’s troops are splits into two groups in how they respond to the legal move. The first group is inclined to demand damages whilst the second group wants an admission of guilt from the Dutch government because they think that damages are not worth their parents’ lives.

“We are currently part of the second group. But, we also have no objections towards the first group,” he says.

Andi emphasises that Westerling is only the “personification” of the series of war crimes committed by the Dutch in South Sulawesi. There are still other officers who were also responsible.

KUKB chairman Jeffry Pondaag explains that at that time, the Dutch presence in South Sulawesi was an utmost violation because Indonesia had declared its independence in 1945.

Unfortunately, the legal efforts to hold the Dutch government accountable are still ongoing without support from the Indonesian government. In line with that, this issue has not yet received proper public attention due to a lack of Dutch language proficiency, Jeffry says.

There was a captivating event that occurred during the trial of Santa against the Dutch government. La Muha, who acted as a witness, suddenly asked the judge a question after the legal proceeding was over. He questioned the fate of other families who also fell victim due to the atrocities committed by Westerling.

“Is it just Iabu’s family that is being treated this way? What about the others who were also victims?” La Muha asked. The judge then answered in Dutch, agreed and realised that there are still many other incidents that require attention. The answer then translated into Indonesian.
—