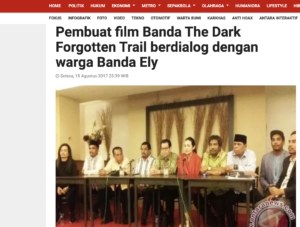 Ambon (ANTARA News) – The producer and director of the film “Banda The Dark Forgotten Trail” met with the Wandan community (the descendants of the original population of the Banda islands) who live in Banda Ely, Elat, Kei Islands, Southeast Maluku. They discussed misunderstandings regarding the film.

Both producer Sheila Timothy, who is also known as Lala, together with director Jay Subiyakto, visited Ambon where they talked to representatives of the Wandan community on Monday. The meeting was mediated by Territorial Military Commander XVI/Pattimura TNI (Indonesian National Armed Forces) Mayor General Doni Monardo.

“We are very happy that we were able to have a dialogue with the community leaders and youth of the Wandan people regarding the screening of the film “Banda, the Dark Forgotten Trail” and the fact that we didn’t involve them in the creation of the film,” said Lala, in a press statement with the Wandan community, after the discussion.

According to Lala, the purpose of filming the “Dark Forgotten Trail” was to build a sense of unity among Indonesians in order to strengthen the nation.

“Yet, as filmmakers, we are not historians who know all the events of the past. As a result, there is much room for improvement in the film,” she said.

She stated that both herself and Jay were very happy to have been able to discuss and receive feedback, including developing the culture.

She also expressed the hope to make other films about the Wandan community and related events that need to be brought to light.

“I, as a producer, and Jay as a director, would like to apologize to the Wandan people as well as to the community and the youth leaders, if what we presented was wrong or if it led to misunderstandings. We did not have bad intentions by making this film,” Lala said.

She admits that the film portrays a very painful event for the Wandan community and because of that, she hopes the topic could be brought up again to be explored further, so that it could deliver justice, not only to the people of Wandan but also to the entire nation.

Wandan community leader Abdul Azis Latar appreciates the good intentions of both the producer and the director in opening up a dialogue as well as clarifying the statements that were made in the film.

“We, from the Wandan community were able to find a solution to solve this issue after a careful dialogue, which was led by the Pattimura Territorial Military Commander, so that the problem will not linger on. This is to maintain stability, security and protect the good name of the Wandan people, for the sake of our region’s development,” Abdul said.

Therefore, he continued, the Wandan community wholeheartedly accepts the apology, which has been made in public. However, there were a number of critical notes too about further investigating what has been brought to light so far.

“The people of Wandan hope that for future films we will not be ignored and excluded from participating, so that films can have a positive impact and represent the aspirations and interests of the Wandan community”, he said.

According to him, Banda’s history cannot be separated from the Wandan people who now live at the Kei islands and other places.

“We hope that this meeting will serve as a starting point for the future to get more clarity, so that the objectivity involved in the production of a film will not disturb the serenity and peace of the Wandan community,” he said.

Chairman of Komisi A of the Maluku Provincial DPRD (Regional House of Representatives), Melky Frans, admits that the issues surrounding the Banda film had already been brought up at the DPRD some time ago, as a result of demonstrations.

“It turns out that there are no problems that cannot be solved, if everyone is willing to sit down together calmly and with a clear mind. We see that the Wandan people, despite their rough character, can accept apologies,” said Melky.

According to him, the Banda film issue, which sparked controversy, hurting the feelings of the Wandan community, is now settled.

“As a representative of the people and on behalf of the people of Maluku, I would like to thank the filmmakers because they have given their best to this region and its people,” he said.

“In my opinion, the issue about my brothers and sisters from Wandan being hurt by the content of the film, is now settled leading to a positive result,” he added.
—
See also:

The people of Banda Ely on Kei – Polikant TV