An Indonesian researcher participating in a controversial research project funded by the Dutch government has defended the project, saying it would benefit Indonesia by revealing a part of the country’s history more clearly.

An initiative by the Dutch government to fund a large-scale research project titled “Decolonialization, Violence and War in Indonesia, 1945-1950” sparked controversy recently after at least 126 Indonesian and Dutch historians and activists signed an open letter questioning the objectivity of the research and raised scepticism that the project was an attempt by Amsterdam to whitewash history.

Bambang Purwanto, an Indonesian historian contributing to the research, said the project involved Indonesian researchers and that this would allow them to provide different perspectives on a part of history long written about by foreign historians. “We are tired of being consumers of work by other people on our own history,” Bambang told The Jakarta Post on Sunday.

The research program, backed by €4.1 million (US$5 million) in funding, consists of nine sub-projects that examine Dutch military operations in Indonesia during the period. Two of the sub-projects, called the “Regional Study” and the “Bersiap (Get Ready) Period,” will involve historians from Gadjah Mada University (UGM) in Yogyakarta, led by Bambang and Abdul Wahid. In the open letter, the 126 historians and activists warned that specific issues might be prioritized in the study, such as historical accounts between 1945 and 1950 that showed locals committing violence against the Dutch and people of Chinese descent that locals accused of being Dutch agents.

In addition, the new generation of Dutch scholars were critical of their country’s historiographical tradition, which had adopted a colonial perspective, Bambang argued. “So, it could be said that the research is aimed at changing the colonial perspective of Dutch historiography of that period. It is not about differences between Indonesian and Dutch perspectives.” For Bambang and other scholars contributing to the project, the Dutch fund was a dream come true, as it allowed them to initiate their own research into parts of the country’s history.

He said he and his fellow researchers had on several occasions proposed a similar research project to the Indonesian government, only to be rejected. “They said the theme was not relevant to the country’s development and that it was too philosophical and abstract,” he said. “Now, when the same idea is valued by an outside party, those inside raise questions about our involvement in the project, just because it is funded by the Dutch government.”

Suspicion of the project was, in particular, aroused by the fact it was rejected in 2012, when it was first proposed, at a time when there was a growing number of narratives on Dutch war crimes and when lawsuits were filed by the Dutch Debts of Honor (KUKB) against the Netherlands. It was accepted when it was proposed again in 2016.

Triana Wulandari, the director of history at the Indonesian Education and Cultural Affairs Ministry, said she could not comment on the matter as she had not received a letter from the 126 historians and activists.

Roel van der Veen, head of political affairs at the Dutch Embassy in Jakarta, said the government simply provided funding for the project while the research itself was “not the business of the government.” He also denied there was a contract binding the researchers to produce specific results in the interest of the Dutch government. “The contract guarantees they are independent [in conducting their research],” he said. “The government does not have a separate agreement [with the researchers].”
— 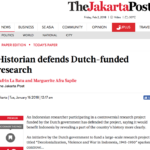