Recently the city of Amsterdam proudly announced that 27 streets in the new neighborhood in IJburg would be named after men and women who fought colonial rule. Two-thirds of these streets will be named after people who fought against the Dutch colonizer in Suriname and the Caribbean, one-third will be named after individuals from Indonesia, officially the “Dutch East Indies” during colonial times. A closer look reveals that the selection of the 10 Indonesian names illustrate the Dutch colonial mindset, which, due to the lack of Indonesian representation, keeps old power structures intact.

Strikingly the selection of Indonesian names is by no means in proportion to the actual size of this former colony. The Dutch East Indies was the largest region ever colonized by the Netherlands for such a long period, and from where the largest profits came. The fact that most of the street names are Surinamese and Caribbean gives the false impression that these were the Netherlands’ most important colonies, while it is more a matter of a lack of Indonesian representation.

That lack of representation becomes clear from observations that the Indonesian founding father Sukarno, the republic’s first president, is not honored with a street name. How is it possible that the most anticolonial and anti-imperialist Indonesian president has been ignored?

The name selection appears to be based on a recommendation from the Royal Institute of Linguistics, Geology and Ethnology (KITLV), which nominated 22 Indonesian names. Subsequently, its director Gert Oostindie who highlighted 10 of his personal preferences. Sukarno was skipped on his advice, as can be seen in the final selection of the municipality.

The municipal Public Space Naming Committee largely followed Oostindie’s recommendation of Indonesian names, adopting seven names from his “top 10”. Only three were not selected – Sutan Sjahrir, Muhammad Hatta and Poetiray – and two names not highlighted by Oostindie were chosen anyway (Pattimura and Diponegoro).

The KITLV’s long list also immediately shows the old Dutch, colonial spelling. Are the experts unaware that Indonesia has long replaced “oe” with “u” and “tj” with “c”? Spelling sometimes differs per person but Sukarno, for example, had indicated that he preferred the “u” in his name. When using “oe” it shows the clinging onto the colonial era and reveals the Eurocentric view of the initiative.

The KITLV recommendation illustrates the Dutch problematic relationship with the colonial past. Oostindie chose the first Indonesian vice president Hatta over Sukarno, though neither made the final selection. Unlike the Dutch criminalization of Sukarno, Hatta was generally praised for his moderate attitude and his willingness to negotiate with the Netherlands.

In December 1949, just after Hatta became prime minister of what was then the United States of Indonesia, he signed the transfer of sovereignty in Amsterdam. This agreement forced Indonesia, in exchange for independence, to take over the debts of the colony worth 4.5 billion guilders (US$2.5 billion). Thanks to Hatta, the Netherlands received nearly 4 billion guilders from Indonesia up to 1956, money used to finance the Dutch postwar reconstruction.

The Netherlands received nearly 4 billion guilders from Indonesia up to 1956, money used to finance the Dutch postwar reconstruction.

The same can be said about the politician Sjahrir, selected by the KITLV. Under his name it is written that: “He was an acceptable discussion partner for the Netherlands when he negotiated the Linggadjati Agreement ( 1946 ).”

In the accompanying letter of the recommendations, Oostindie apologizes for the unequal gender ratio of his advice. Yet, Indonesian history clearly shows that the anticolonial resistance produced numerous female fighters too, such as the Acehnese Cut Nyak Dhien.

Equally striking is that the most anticolonial writer in Indonesia, Pramoedya Ananta Toer, did not make the final selection. Ignoring the real anticolonial figures is exactly the problem of these white Dutch attempts to “do something” with the Netherlands’ enormous colonial debt.

Whereas political right-wing groups mostly act defensively when the colonial past is brought up, the dominant idea among leftists is that something must be done to deal with past Dutch human rights violations.

From the city of Rotterdam, the same KITLV received 248,000 euro ($271,221) in research money to examine the city’s history of slavery. Oostindie is also one of the project leaders of the national research project of “Independence, decolonization, violence and war in Indonesia, 1945-1950”, which costs the Dutch taxpayer 4.1 million euro.

The criticism of the latter project has been largely ignored. Worse, such expensive studies would never have existed if non-white activists had not put the topics on the agenda for decades. Now they have to watch from the sidelines how the white elite conducts research and receives lots of money.

What these predominantly white, “left” attempts share is that they are half-hearted and therefore support falsification of history. Ignoring Sukarno continues earlier Dutch propaganda that always depicted him as an extremist, a womanizer, even a fascist who collaborated with the Japanese.

If Amsterdam Mayor Femke Halsema really wanted to make an anticolonial gesture, why did she ask a white man like Oostindie for advice? Amsterdam newspaper Parool reported that the National Institute of Dutch Slavery organized a panel discussion last May with representatives from a number of grassroots organizations that apparently agreed to the list. If Indonesian representatives were involved they would never have agreed to sideline Sukarno.

For example, why didn’t they consult Jeffry Pondaag, an Indonesian living in the Netherlands, who chairs the K.U.K.B. (Committee of Dutch Honorary Debt) foundation, the only one in our country who represents Indonesian war victims and which has successfully sued the Dutch state for years? Or why didn’t they ask Michael van Zeijl and Christa Soeters — both members of the former Dutch East Indies diaspora — who have initiated discussions about the above street names under the title De Grauwe Eeuw (the gray century)?

Or why didn’t officials contact the Indonesian journalist Joss Wibisono, who lives in Amsterdam and previously questioned why the Netherlands still has no Sukarno Street?

By not honoring Sukarno with a street name, the white Dutch leftists show the true colonial face of the Netherlands, maintaining old colonial power structures. Perhaps the municipality can correct this historical mistake by renaming the entire neighborhood. The “Sukarno district” seems a proper statement to me. 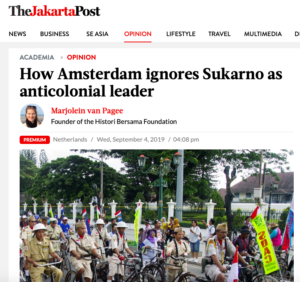 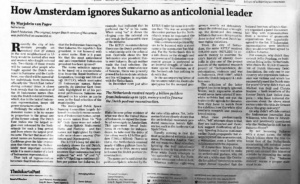