How bad, how cruel were the Dutch to us?

Don’t get me wrong. I love the Dutch people as much as I love any other nation. They are some of the nicest people on earth, certainly among the most tolerant. The question I pose is specific to the era of when the Dutch controlled the chain of islands we now call Indonesia, an era spanning over three centuries.

Like many people born after independence, I had no experience of living under the Dutch rule to be able to say how bad or good it was. At school we learned a thing or two about the nature of colonialism.

But that is precisely the question. How much do we know about how our ancestors lived through those 300 years, when we know that they were killed, tortured, raped, suppressed, enslaved at home, sold as slaves abroad, forced into hard labor, sent to exile, treated as non-citizens on their own land and stripped of all dignity as human beings?

Going by the available literature in Indonesia, the Netherlands or anywhere else for that matter, we know very little about the humiliation they had to go through.

We celebrate Indonesia’s independence this week like we have done every year since 1945, honoring the heroes who fought during the revolutionary wars in the late 1940s and early 20th-century thinkers who started the campaign for independence for the Dutch East Indies.

That is really as far as our collective memory takes us. We are celebrating an ahistorical independence anniversary.

What about those 300 years from the time the Netherlands started to impose control over global spice supplies from Indonesia by violent means?

We know of the 1621 killings of almost the entire population of 14,000 people on Banda Island. But we know little of the intervening years between that massacre and the war for independence in 1945-1949. We know something about the Diponegoro War, and we get a glimpse of Dutch abuses from the 1860 novel Max Havelaar by Dutch author Eduard Douwes Dekker.

We hardly get any picture of life under Dutch colonialism from writers in the Balai Pustaka generation from 1920 onward. As good as their writings are — considered classic Indonesian literature — they take the colonial system as given, understandably because of the censorship.

We get some ideas from the writings of Sukarno and friends, but they are clouded with rhetoric for independence. We get far more from Pramoedya Ananta Toer, who had not lived through the era but was able to recreate the atmosphere vividly around Minke, the main character of his Buru Quartet novels. Pram’s novels only take us to the period between the end of the 19th century and the first half of the 20th century.

Dutch literature of the 17th, 18th and 19th century is filled with glorification of how their tiny country ruled the world to become the wealthiest nation on earth. The VOC, the Dutch East Indies Company, has been touted as the first truly multinational company

Grossly absent is the cruelty and brutality as the Netherlands seized control of the spice trade and the transatlantic slave trade. These are not in their collective memory.

In the United States, we get glimpses of the horrors that African slaves went through, and some of these stories have turned into bestseller books and home box office films.

It is heartening to see a handful of Dutch and Indonesian historians launching Histori Bersama (Shared History) at historibersama.com, which tries to link our common history spanning over 300 years from the two different perspectives.

Launched in 2016, Histori Bersama casts doubts on the credibility of an ongoing research project commissioned by the Dutch government to look into claims of war crimes committed when Dutch soldiers were sent to Indonesia to reimpose colonial rule after World War II. In spite of the massive evidence, the Dutch version of the “police actions” in 1945-1949 denied any war crimes and laid the blame for violence on Indonesian “rebels”.

Dutch consciousness and understanding of their colonial history is for them to deal with. If they have not come to terms with their ugly past, it is their problem.

They are in good company. Neighbor Britain is still shocked, perplexed and in denial since their version of their great imperial rule in India was challenged in the 2016 book Inglorious Empire — What the British Did to India, by Shashi Tharoor.

As Indonesians, we need to learn about our history from our own perspectives, most particularly about how our ancestors lived through those very difficult years of Dutch colonial rule. Three centuries is such a long period that it must have left a deep legacy in our psyche and perhaps even our characters.

Our inferiority complex may have developed from those long years of violent suppression. Corruption, a malady present among all post-independent Indonesian leaders, may have been inherited from the princes and sultans who collaborated with the Dutch rulers, in return for material gains and power. What about the violent threads?

We may have taken some of the best from our colonial masters, but we must have also inherited some of the worst Dutch character traits.

Without understanding our own history of colonial subjugation, we may never know who we really are. We owe it to ourselves to learn about the truth. 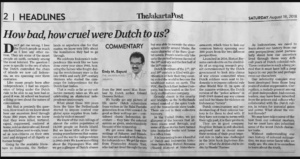