The Jakarta Post, 1 Feb 2018, By: Asvi Warman Adam, the writer is a historian at the Indonesian Institute of Sciences (LIPI)

One point in history Indonesia and the Netherlands cannot agree on is the date when Indonesia became independent. Indonesia declared its independence on Aug. 17, 1945, but the Dutch believe the transfer of sovereignty did not take place until Dec. 27, 1949. This is the reason why Indonesia considers the Dutch military attacks in a number of regions across Java in 1947 and 1948 military aggressions, while the Dutch call them police actions.

It is impossible to get the Netherlands to acknowledge the fact that Indonesia gained its freedom on Aug. 17, 1945, as that would mean considering activities of their forces in Indonesia between 1945 and 1949 war crimes. Let the two nations write this period of history differently and even contradictorily, the longstanding relationship between the two will not be at risk.

Meanwhile violence at the hands of Dutch troops in Rawagede in Bekasi, east of Jakarta, and in South Sulawesi (by captain Raymond Westerling) became the subject of court hearings in the Netherlands in 2011 and 2012 and prompted the Dutch government to issue an apology and pay damages to the families of those who suffered in the two incidents.

We should not forget, however, that the victims were considered Dutch subjects, since the violence erupted before Dec. 27, 1949. Attempts by the Commit-tee of Dutch Debts of Honor or KUKB, chaired by Jeffry Pondaag, who stood up for survivors of the bloody incidents, must be appreciated, and keeping the work going would be a good thing.

Controversy surrounding the history resurfaced last November, when more than 100 Dutch and Indonesian nationals staged a protest, questioning a study into the period of 1947-1950.

Funded by the Dutch government, the research involves Indonesian historians. Some were anxious whether it would change the history of Indonesia; for instance, would the Dutch military aggression be referred to as only as police action?

The study titled “Decolonization, Violence and Wars in Indonesia, 1945-1950″, will be completed in 2021 and seeks to probe the conditions and extent of violence in conflicts occur ring during Dutch military operations in Indonesia. Costing €4.1 million (US$5.11 million), it was commissioned to three research agencies in the Netherlands in collaboration with Gadjah Mada University (UGM) in Yogyakarta.

What inspired the Dutch government to fund this study? The 1969 report “Excessennota” discusses violent acts by soldiers over the 1945-1950 period and recorded 110 cases of excessive violence.

However, in a dissertation published in 2016, historian Remy Limpach revealed that the violence was not just an excess but was structural in nature.

Most of the drafted personnel and volunteers served at the age of around 20, and many had not undergone military training and knew little about Indonesia and its people.

The Dutch government did not rush to deny the dissertation’s findings. Instead, it announced its intention to carry out a comprehensive study into the underlying causes and background of these violent acts as well as the international situation at the time.

Engaging Indonesian historians was seen as an approach to widen the research perspective. The program encompasses nine projects, two of which involve historians from Indonesia, coordinated by Bambang Purwanto and Abdul Wahid from Gadjah Mada University (UGM.)

This research will not change the history of Indonesia, but the Dutch government needs it as part of its accountability to its people. For sure, the Netherlands will continue to regard Dec. 27, 1949 the date on which they transferred sovereignty to Indonesia, while Indonesians will only accept Aug. 17, 1945 as its day of independence.

The situation surrounding the current project was quite different with major research conducted in 2000 by PJ Drooglever at the request of the Dutch parliament on the Act of Free Choice (Pepera) in Papua in 1969. There were concerns among Indonesians that the research would lead to objections to Pepera and consequently be used as a historical argument by separatists.

When the report was published in 2005 and its Indonesian translation came out in 2010, the anxiety turned out to be baseless. The study did conclude that there were issues in Papua, but it affirmed that Pepera was legally acknowledged by the United Nations.

The question now is how the latest research will benefit Indonesia. Apart from the fact that the study into Indonesia during the 1945-1950 period is fully funded by the Dutch government, the Indonesian historians participating in the project will be able to conduct regional studies and come up with findings that Indonesians need to under-stand, including acts of violence that forced the newly born nation to move its capital from Jakarta to Yogyakarta in January 1946.

Social revolutions in the Central Java regions of Brebes, Tegal and Pemalang as well as in eastern Sumatra should also be fully unveiled. Violent events and looting affecting ethnic Chinese that forced them to set up their own security unit, Po An Tin, are certainly a subject worth probing, and so is the 1948 Madiun incident that resulted in a large number of casualties.

Similarly important is the study of the Dutch-Indonesian Round Table Conference (KMB), which resolved that Indonesia was required to pay off the debts the Dutch East Indies government made with third parties from 1942 to 1949.
— 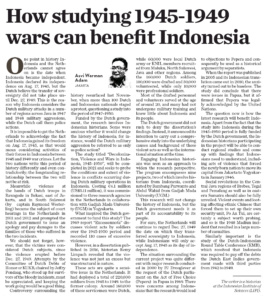