How the Dutch Responded to Indonesia’s 1945 Proclamation

Due to diplomacy failure, the Dutch issued a problematic decision: the Agresi Militer. 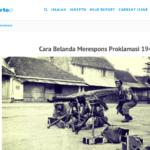 Bekasi, 20 July 1947. The Dutch troops pressed on and quickly advanced into the northern part of West Java. After successfully capturing Jakarta and seizing strategic government offices, they started moving to the east toward the areas still controlled by the Republik forces.

In the Tambun area, Bekasi, in a small village called Kampung Bulu to be exact; their movements were intercepted by the Indonesian National Armed Forces (TNI) who had been ready for the assault. In this village, for the first time, the Dutch troops were engaged in a firefight (or armed conflict) with the TNI.

The Dutch were supported by the Laskar (troops) led by H. Pandji, a notorious warlord from Bekasi, who defected to the Dutch side because the Laskar he led had bitter disagreements with the TNI soldiers.

The Laskar were brave. They fought fiercely and obliterated the TNI’s line of defence in Tambun, to the point of overwhelming them. Fortunately for the TNI, the Laskar ran out of ammo and they had a chance to safely retreat for a while. This small skirmish in Kampung Bulu marked the beginning of a series of battles in the “Police Action I.”

After the incident in Kampung Bulu, the Dutch started to aggressively attack West Java, which was still controlled by the Republik. The assaults were increasingly fiercer and resulted in many casualties on both sides. The Dutch deployed a massive amount of modern war machines to fight the poorly-armed Republik forces.

From an “Indonesian-centric” perspective, that event was an Agresi Militer (Military Aggression), for Indonesia, which had declared its independence and became a sovereign country, was invaded by the military forces of another country. But from the Dutch perspective, what they did was no more than a ‘Police Action’ – not invading somebody else’s country, but ensuring security in their own territory.

The use of these two different terms have a broad political dimension, showing how the two opposing sides interpret to the series of the battles that occurred in a period of no more than two months.

On one hand, the Dutch desperately clung to the conservative stance that the Indies must continue to be under the Queen’s rule, at all cost. On the other hand, the Republiken[1] in Indonesia were firmly committed to their revolutionary principle: Sekali Merdeka, Tetap Merdeka (Freedom once and  forever).

Internal Struggles before the Action

It was not only the Police Action that was important, but also how the event had become the tip of the iceberg of the tensions between the Netherlands and Indonesia, both at the diplomatic level and in the armed conflicts in the field that had occurred since the proclamation of Indonesia’s independence by Sukarno-Hatta.

In the diplomatic area, the fights between the Dutch and Indonesian took place on the negotiating tables which failed many times over. It was true that both parties were aware that the dispute must be resolved immediately to avoid dire consequences, and the negotiations were held amidst growing tension, for the idea of a truce raised. However, due to the stark differences between the two sides, more often than not the negotiations had resulted in a dead-end.

There was still a glimmer of hope for peace when the Linggarjati Agreement was rectified at the end of 1946. This agreement resulted in many articles which, in essence, stated that the two parties should hold back and maintain peace through a ceasefire.  However, because the two conflicting nations had their own different interpretations, the Linggarjati agreement appeared to be a mere futility. It failed within four months.

Meanwhile, in the field, many minor skirmishes continued to occur in the conflict area. The (Indonesian) civiliansjoined the battle after witnessing their homeland being occupied by their former colonisers who wanted to re-establish the grips of their colonial rules.

In these two contexts, it appeared that the dispute between Indonesia and the Netherlands was a conflict that could not be resolved because each party remained resolute and unwavering in their respective stance.

Further analysis, especially on the political context, showed that the “Police Action” was the result of the internal political struggles in the Netherland government. The political condition in Europe after the Second World War also affected the Netherlands bargaining power and such situation had forced them to submit to international political pressure. Moreover, the Netherlands depended very much on the “generosity” of the United States, especially during the post-war economic recovery. The Netherlands had to try very hard to convince the world that what they were doing was still in compliance with the articles outlined in the UN Charter.

The Continuity of Old Pattern

Another reason why the Dutch were so persistent, if not stubborn, in reclaiming their former colony was because of the outdated pre-war beliefs that were still firmly etched in the minds of Dutch diplomats and politicians.

The old belief and understanding from the periods before World War II that the Netherlands must remain the “master” of the Indies. This outdated belief had seemingly made the Netherlands turn a blind eye to the latest situation that had developed by then.

The three and a half years of the Japanese ruthless occupation, followed by the proclamation of independence, had brought forth the massive changes in the social structure in the Indies. The spirit of independence among the Indonesians, despite the many frictions within, remained too serious to be underestimated by the Dutch. Unfortunately for the Dutch, they failed to understand the change. They still thought that the Natives would still accept their presence with open arms.

Meanwhile, on the Indonesian side, the Police Action also had massive political consequences. The domestic political situation, which was still in the consolidation stage toward a more established nation, was also an extra burden to Indonesia during their conflict with the Netherlands. As a newly founded country, Indonesia faced two difficult challenges at once: the chaos of their domestic political situation and the constant interference from the Netherlands.

It was amidst this complicated situation that, in the early hours of 17 July 1947, the Dutch cabinet meeting issued a decree: the war was inevitable.

International Political Pressure and the End of the War

Before the military invasion was launched, the Netherlands tried to garner support from the international community, especially from the UK and the United States. They convinced the two countries that what they were doing in Indonesia was rather a “Police Action” aimed at containing the chaos outside the Republik controlled areas and to implement the Linggarjati Agreement.

The areas referred to by the Dutch were initially very limited. However, in public, Lieutenant Governor General H.J. van Mook repeatedly emphasised that the Dutch government no longer tied to the Linggarjati Agreement.

As Anthony Reid noted in his book the “Indonesian National Revolution 1945 – 1950”, van Mook also remained adamant in his stance that “All Java needs to be controlled and a new leadership under the Republic that submits to the wishes of the Dutch government has to be formed.” (p. 191).

The United States did appear to support this, but the latest research conducted by Frances Gouda and Thijs Brocades Zaalberg, titled “American Visions of the Netherlands East Indies/Indonesia: US Foreign Policy and Indonesian Nationalism, 1920 – 1949” showed that the US implemented a “double standard” support, if not “two-faced politics”, in the Indonesia-Netherlands conflict.

When the issue of the Police Action was brought to the UN Security Council on 31 July 1947, the Netherlands reluctantly recognised the international pressure and began to consider ending the armed conflict.

Within the Netherlands itself, however, the UN Security Council resolution was approved in light of growing international pressure. At a cabinet meeting, three weeks after the resolution, the Dutch government decided to end the conflicts because “the goal has already been achieved and the goodwill of the Netherlands is more important than winning territories in Java and Sumatra,” said Pierre Heijboer on his book titled De Politionele Acties: De Strijd om Indie 1945/1949 (p. 50).

[1] (Republicans, Indonesians who are supporting the independent Republic of Indonesia.)