A Façade of Decency. How the Netherlands Deals With Its Colonial Past

The Low Countries, May 25, 2020, By Anne-Lot Hoek, translated by Elisabeth Salverda 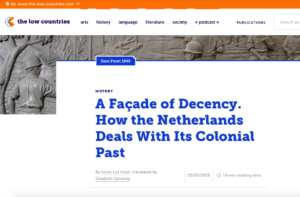 For the Netherlands, the year 1945 was not an end to its war history. The country started a ruthless war, lasting almost five years, against Indonesian independence. Dutch colonialism had a façade of decency about it, a façade that has endured long after the so-called “police actions”. Dutch tolerance extends only so far; there is still no room for issues that question the decency of the establishment. In 2020, seventy-five years after the declaration of Indonesian independence, it was high time for apologies to be made at the level of government, and for historiography and a national memory that is more inclusive.

The Hague, 14 September 2011. In a courtroom, fifty-eight-year-old cement worker and activist Jeffry Pondaag and his lawyer Liesbeth Zegveld tensely await the judge’s verdict. Three years earlier, through his foundation the Committee of Dutch Debts of Honour (Komite Utang Kehormatan Belanda, K.U.K.B.), Pondaag had accused the Dutch state, on behalf of eight Indonesian widows and one male survivor, of being accountable for the execution of their partners in the Javanese village of Rawagede. There, on 9 December 1947, according to Indonesian counts, Dutch soldiers shot dead 431 men.

The incident took place during the almost five-year war that the Netherlands waged against its former colony after Indonesia declared independence on 17 August 1945. In the Netherlands, the war was euphemistically referred to as “police actions”. Pondaag, the son of an Indo-Dutch mother and an Indonesian father, in the years prior to the lawsuit had built a reputation for himself as the uncompromising thorn in the side of the establishment. He put the Rawagede case on the agenda, and with it the question of Dutch guilt in Indonesia.