Learn to be in peace with Dark History

The Dutch government already apologized for the atrocities during the revolution. But have we been honest to the history of war crimes committed by Indonesian side? For many Indonesians, during the revolution the Dutch were evil and the Indonesians were right. But killings of Dutch civilians or Japanese and British prisoners without court proceedings also took place.

After the screening of the documentary film ‘How the Netherlands deals with history’ (1995) the audience seems to like the discussion that is followed. The film itself portrays a Dutch army deserter named Princen who chose the side of the Republic Army and later married to an Indonesian wife.

Princen fought against Dutch military, against his comrades. The film illustrates how the Dutch deal with the history of Dutch soldiers who committed human rights violations in the period of 1945 to 1949.

The film also compares the massacre of civilians by Dutch soldiers in the village Galung-galung on February 1, 1947 during the “pacification” by Westerling. Which was not much different from what the Germans did on October 1, 1944 during World War II in the village of Putten in the Netherlands. The Dutch tried to learn a lesson of the dark events that happened 70 years ago to teach the next generation. In the 1990s, the history taught to students at school in the Netherlands compared this murder case with the massacre in My Lai, Vietnam, committed by American troops in 1968.

A Dutch Army veteran, Maarten Schaafsma, who used to join the struggle against the Indonesian resistance as a commander, declared that after a fierce fighting in an [Indonesian] village, he ordered the military interpreter to question one of the prisoners of war, because he was in civilian clothes (not wearing a military uniform).

“Interrogate the guy!” told Maarten the interpreter at that time. Maarten was not sure about his prisoner. “The interpreter, who had a Tommy Gun, was talking to the prisoner. I could not follow them because they spoke in Javanese language. The next moment the interpreter slammed him to the ground, aimed his Tommy gun and shot him death!” recalls Maarten who was shocked and never forgot the behavior of this interpreter. During World War II German Nazis slaughtered Maarten’s brothers and [in Indonesia] he realized that they were perhaps killed in the same way as this man.

Dutch veteran Joop Hueting had a similar experience when he was only two days in Indonesia where he got involved in the struggle for Independence. Joop called the young prisoner that he saw “a true Freedom Fighter”. He witnessed how the young man refused to give any information to the Dutch Army. The boy was kicked and beaten up, then his body was hung upside down and his head slammed until the skull cracked.

At that time, the young Joop could not do anything because he was wearing the Dutch military uniform just like Maarten. They were sent to Indonesia and indoctrinated that they were fighting against bandits. However in the eyes of the Republic of Indonesia, these men were not bandits but true fighters.

The man named Westerling became symbol of the atrocities by the Dutch army. His full name was Raymond Westerling and he is the one who got involved in a massacre of thousands of people in South Sulawesi. The Indonesian side mention that there were 40,000 people massacred in 3 months by the actions of Westerling. If we divide 40,000 people by 90 days, then the Dutch soldiers massacred 444 persons every day.

Yet, according to Alex Kawilarang who declared in his biography “AE Kawilarang Untuk Sang Merah Putih” (Ramadhan K.H., 1989) that the research which was conducted in Makassar by the Indonesian army in 1951, counted a number of 1,700 casualties that died on Indonesian side because of the military operation by the Dutch Army. Most of them died between mid-1946 until mid-1947 and approximately 700 victims were the result of Depot Speciale Troepen (DST) and the Village Defenders Front (Barisan Penjaga Kampung).

Of course, most Indonesian people prefer to believe that the figure of 40,000 victims is right and deny that the number was only about one thousand. However, regardless of the numbers, the extrajudicial killings are crimes that should be prosecuted.

Beside the cases of Westerling in South Sulawesi, the Indonesian people also remember the massacre of Rawagede in Karawang, West Java. A total of 431 people were killed and related to this incident. The Dutch Government paid damages to the families of the victims, after the decision of the tribunal court in The Hague on 14th September 2011.

Tjeerd de Zwaan as the Dutch Ambassador to Indonesia apologized in the name of the government in the Netherlands for the war crimes committed by Westerling (2013) and the Rawagede massacre (2011). In 2013, Prime Minister Mark Rutte also apologized for the Dutch attitude in the past. The Dutch government announced the amount of compensation of € 20,000.00 to the widows of Rawagede massacre.

Learn to get in peace with a Dark History – How about Indonesia?

Westerling and the Dutch Army Lieutenant, who was commander in Galung-Galung, were never punished for their crimes. The previous Dutch governments had a different attitude. The last decade or at least the generation of Prime Minister Mark Rutte’s government had been willing to accept the fact that in the past, his country has made a mistake.

In the limited group discussion about the Dutch-Indonesian Conflict (1945-1949) that was organized on 15th April 2017 at the Proclamation Museum in Jakarta and where the documentary ‘How the Netherlands deals with History’ was screened, most of the participants seemed to be less willing to find out that there were also human rights violations committed by Indonesians against other nations, especially the Dutch.

In the small discussion, Marjolein van Pagee told about her grandfather who served in the Dutch Army in East Java during the revolution. Her grandfather never told her about his experiences in East Java. According to Marjolein there are only a handful of people who openly accept the darkness of Dutch history. Currently, she is a journalist and graduate student at Leiden University and her intention is to bring Indonesian and Dutch people together, in peace, in a project named ‘Histori Bersama’.

According to Marjolein, the colonial history in general is not remembered well by the [Dutch] people. When you go on the street and ask common people, they almost know nothing about the Dutch history in Indonesia. For sure, they know Bali, but they probably do not know about the history of violence during the Dutch invasion of the island. Most [Dutch] people do not know about the past relation with Indonesia.

Another speaker, Hendi Jo tells about his childhood experience when he played ‘war’ and recalls that most of the young children did not want to play the role of the Dutch military. Although the weapons and uniforms are better, most of them preferred to play the Republican Army.

In the imagination of Indonesian children, the Dutch people are evil. However, when Hendi was in junior high school he got to know a Dutch person who supported the struggle of Indonesia. One of them was Douwes Dekker alias Danudirja Setiabudi. Hendi also began to get acquainted with the figure of Princen, one of the founders of the Jakarta Legal Aid Institute (LBH) who cared more about the suffering of marginalized people than common Indonesians.

According to Hendi, the people of Indonesia as a whole must begin to learn to differentiate the Netherlands as a political entity and the Netherlands as a group of ordinary people who must have a good side too. In fact, what happened in Indonesia during the period of 1945 until 1949, was the act of their capitalistic politicians and imperialist passion. Hendi himself has written several history books.

During the discussion, participants were given the opportunity to argue only about the War of Independence in general without going to explore whether the human rights violations were committed by Indonesians, the Dutch or others. Until a slim young man, named Benny Rusmawan, raised the question about whether we as the [Indonesian] nation are ready to be honest about the history and admit that not only the Dutch were committing war crimes. That it was also committed by our nation, either by armed men or by Indonesian military men. Some of the older people who took part in the discussion seemed not to like that but luckily the day was getting late and it was about lunchtime too. Then, the discussion was quickly ended.

The young guy who is part of the Historical community in Bekasi also mentioned the massacre of Japanese prisoners who were about to return home on 19th October 1945 as well as the killing of 26 British soldiers whose plane crashed in Rawa Gatel (Bekasi) on 3rd November 1945. The incident of the killing of the British army in Bekasi, which was recalled by Benny, is also mentioned in the book of Citra Daerah Kabupaten Bekasi Dalam Arsip 1900 – 1945 (The image of Bekasi Regency in the Archives 1900 – 1945, published in 2014).

After the massacre, the British military unit got out of control. On 24th November 1945, Bekasi region was rampaged by British soldiers, the villages around Tambun, Cikarang, Lemah Abang, until Karawang were burned down.

Benny’s history study does not focus solely on Bekasi. During the so-called Masa Bersiap in Depok regency similar war crimes took place. Residents in Bekasi became victims of the military and the victims in Depok were civilians who were accused of being pro-Dutch. The book ‘Gedoran Depok’ (Wenri Wanhar, 2011) also mentioned that on 11th October 1945 some Indonesians became ‘gelap mata’ (got crazy, bloodthirsty) and because they wanted to take revenge on the Dutch, they imprisoned the Depok people and took their property away. It was done in the name of the revolution.

Apart from the fact that Japanese, Dutch or British people were labeled colonizers, the treatment to fellow Indonesians (who were considered pro-Dutch) was not less cruel. For example Amir Hamzah was also killed during the madness of the Social Revolution in East Sumatra. Even Otto Iskandardinata became a victim of the armed men. The dark side of the Indonesian revolution is hardly discussed during the history lessons at school, which prefer to portray the Dutch as bad persons. Certainly, honest history writing is a luxury in Indonesia.
— 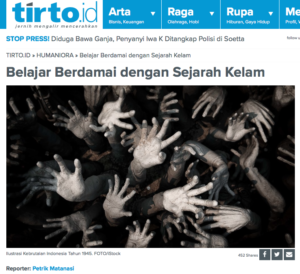