A joint investigation on war crimes committed on both sides of the conflict in 1945 and 1949 would be a nice gesture between The Netherlands and Indonesia.

“We stood on the wrong side of history”, thinks Dutch Secretary of Defence Jeanine Hennis. She is referring to the Indonesian decolonization war, which we euphemistically called ‘Police Actions’.

If Hennis wants to suggest that colonialism was wrong from a historical perspective, of course she is right. The fact that all military superior cultures in history were guilty of conquering the weak is not softening that reality.

But when The Netherlands stood on the wrong side of history, who stood on the right side? The leaders of the independence movement in the former Dutch East Indies? Hopefully the Secretary of Defence is not talking about them. Sukarno and Hatta were collaborators with the Japanese occupiers, a morally reprehensible – if not criminal – act. Not because this meant “betrayal” to the Netherlands, the Indonesian leadership was right not to be loyal to its colonial rulers, but because the ‘Asian brothers’ of the Japanese army often treated the indigenous population worse than the Dutch.

Anyway, not long after gaining independence it became clear that Sukarno was anything but a saint. The country’s first dictator can hardly be placed on the right side of history. Nor can his successor and hero of the war for independence Suharto: a mass murderer compared to whom ruthless Dutch soldiers (like General Simon Spoor or captain Raymond Westerling ‘the Turk’) were just innocent boys. And then Sukarno and Suharto were yet the more disciplined freedom fighters.

There was a total lack of discipline among the unorganized gangs of young rebels, ‘pemudas’, who were responsible for a policy of terror in the power vacuum shortly after the Japanese capitulation targeted against, well, everyone. At the same time that the Japanese guards of the internment camps were protecting many white Dutch, the young Indonesian rebels killed, looted and raped their way through towns and villages. Their victims: Dutch who had left the camps, Eurasian ‘Indo’s’ (who were seen as collaborators), Moluccans, Chinese and of course the ordinary Indonesian. The estimated number of casualties from the Bersiap – perhaps the most neglected period in our 20th century history – ranges from a few thousand to tens of thousands victims.

We can and we should hold the Dutch government in The Hague accountable for trying too long to keep the jewel in the colonial crown (especially since the two police actions launched from 1947 onwards), however it is nonsense to say that the suppression of the revolt in 1945 by allied forces and in 1946 by Dutch troops, would place our country on the wrong side of history. Because, like it or not, as the legal authority of that moment, the Netherlands had the right to restore order in what was then Dutch territory, they were obligated to eliminate the terror of the pemuda’s.

It is obvious that crimes were committed on both sides and that they were more structured and large scale on the Dutch side than was concluded from the Dutch governmental research of 1969. Decolonization wars are always dirty. On ‘our’ side young, often traumatized victims of the German and Japanese occupation had to participate in this war. This is not a justification of their actions and certainly not of the way the military leadership condoned crimes or even gave orders to commit those, but 70 years we should take this fact into account. When only crimes of white offenders are being investigated, excluding the acts of black offenders, this is patronising racism.

It is unlikely that Indonesia is eager to cooperate in new research on war crimes during the Police Actions, but that is no argument to be against such research. More information about our past is always a good thing, no matter how painful the conclusions. But the research needs to be independent and should not be tainted by the personal opinions on good and bad of contemporary politicians anno 2016. Self-flagellation with a slanted view on a current politically correct agenda, won’t lead to the truth and nothing but the truth.

It would be a nice gesture of friendship and reconciliation between the Netherlands and Indonesia if a joint and comprehensive study would be conducted about the crimes committed on both sides in the conflict between 1945 and 1949. On the other hand, it is an example of paternalistic, almost neo-colonialist patronising racism if only the crimes of white and not brown offenders are considered worthy to research.

Bart Schut is a journalist. The family of his father lived in the former Dutch East Indies. 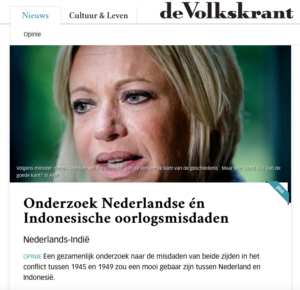