Indonesian relatives seek justice: “He shot my father in the head. I was eleven years old”

They are elderly, yet in the legal documents they are referred to as “the children of Sulawesi.” Their fathers were executed in 1947 by Dutch soldiers in the former colony the Dutch East Indies during the police actions. This is the day [June 26, 2019] of their lawsuit against the Dutch state. “I don’t fight for money, I want justice.”

“All the women and children from our village, Suppa, were forced to gather on the grass. across from us were the men who had been rounded up and taken away two days before. My father was “pembicara” – the spokesman for our village. It was his turn first. He was forced to sit with his hands in his neck about two meters distance from the Dutch soldier who was standing in front of him. He aimed his gun and shot my father in the head. I was eleven years old.”

Andi Monji (82) is one of the relatives of [Indonesian] men who were executed in 1947 by the Dutch during “[ethnic cleansing” in South Celebes (which is now called Sulawesi), when the Dutch colonizer did not yet recognize the independent Republic of Indonesia.

On that particular morning of January 28, 1947, in the village of Suppa, more than two hundred men were executed before the eyes of their mothers, wives, and children. It was a retaliation for the violence against the Dutch rulers in that period.

Talle (76), who has no last name, also lost her father during the violent “Bersiap period” in the former Dutch colony, when two repressive “police actions” carried out by Dutch soldiers killed thousands of civilians. 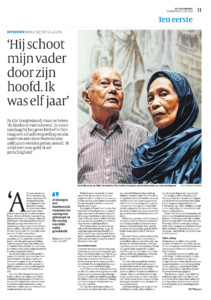 “I did not witness the execution of the men, I lived in Coka, it was different there,” says Talle. She was a toddler of three when Dutch soldiersbeat the men out of their homes with their guns. “We all went outside. Our house was set on fire. They took my father. In the late afternoon he was brought back by my grandfather and an uncle. They wore a bamboo stick with a sarong tied to it. My father was wrapped in that sarong.”

With the help of an interpreter, the Indonesian woman only answers what is absolutely necessary. She wipes her eyes with her headscarf. Detailed questions are painful, she confirms – what was it that you did see? How do you know your father was executed? How did he come back?

She and Andi Monji belong to the group of surviving relatives who claim damages from the Dutch state for the “excesses of violence” by Dutch soldiers that had already been assessed as unlawful by the UN Security Council in 1948. Today their case is brought to court in The Hague.

In 2011, a Dutch judge ruled that eight widows of executed men from the Javanese village of Rawagedeh were entitled to damages. The Dutch state reached a settlement of 20,000 euros per person.

Four years later, on March 11, 2015, a court ruled that the widows of South Sulawesi are also entitled to receive compensation, as are the children. In its verdict the court wrote that “Just like the women, the children will have been damaged for life by these executions. In particular those children who witnessed the execution of their fathers. They lost their fathers at a vulnerable age.”

Why? “Because it is impossible to legally establish, beyond a doubt, the veracity of the evidence,” says the spokesperson of the Dutch Ministry of Defense. In other words: can these descendants prove that the dead men are their fathers? Perhaps their fathers got killed in a firefight? And: have these matters not long passed the statute of limitations?

This type of legal proof did not apply to the widows. The state acknowledged guilt and acknowledged “responsibility” through then ambassador Tjeerd de Zwaan in Jakarta. “I apologize on behalf of the Dutch government for these excesses,” De Zwaan said in a speech in Jakarta on 12 September 2013, commissioned by Prime Minister Rutte.

Is the Dutch government not just afraid that many more Indonesian children will file claims after damages are granted?

That question remains unanswered. “I don’t have much to add to this now,” says the spokesperson of Defense after he consults his legal staff. “For now, I cannot answer that question, it is up to the state lawyer in their plea.”

There are not that many direct relatives left, emphasizes human rights lawyer Liesbeth Zegveld, who represents Monji, Talle and three others. “These people are elderly. The thought of the damage the Netherlands did there, and then appealing the case, it is simply unbelievable. “[The Netherlands] should just accept [the verdict.]”

Today, June 27, 2019, it is the fifth court session and the second time since the 2015-verdict that Mr. Monji is visiting the Netherlands to sue the Dutch government. Mrs. Talle is here for the first time.

“It’s not about the money”, Andi Monji says: “I want justice. Our fathers were breadwinners, we went hungry.” It bothers him that the widows of the executed received damages while the Dutch state appealed the damages for the children.

“That hurts,” says Talle. “We lived in fear, as children we had to hide all the time. Our fathers were taken from us. You would think that the Dutch state would show us compassion.”
—