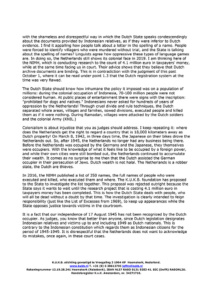 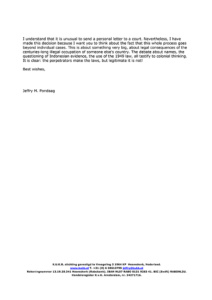 I am writing you this letter because the last court session of December 17, 2019 was the straw that broke the camel’s back for me. Allow me, as an Indonesian, as a cement worker, and on behalf of the Indonesian relatives and victims who were executed and murdered without trial, to remind you of the following facts.

About my arrival in the Netherlands in July 1969, I couldn’t believe my luck, as they say. Because in that summer, Dutch veteran Joop Hueting made a confession on national television about Dutch war crimes during the so-called “police actions” in Indonesia. The country was in turmoil! Hueting’s revelations caused so much commotion that the government felt compelled to start an investigation into the past, resulting in the infamous “Excessennota” (List of Excesses).

Imagine, my Dutch family in-law from mother’s side repeatedly telling me: “you Indonesians are extremists and terrorists, your leader Sukarno was a collaborator.” This is how most Dutch people think. I had to fight against historical falsification for so many years.

Although the list of crimes in the List of Excesses is too shocking for words, nothing was done after it was published. The Dutch State did nothing at all until 2011 when the K.U.K.B. foundation won the Rawagede case. It is deliberate policy that the history of the colonial occupation is excluded from Dutch education. If we had not put Rawagede on the Dutch map through the court cases, the Dutch would still know nothing about the gross human rights violations they committed.

The main question that I keep asking, and which I also want to address to you, is: where does the Netherlands get the right to regard a country that is 18,000 kilometers away as Dutch property! Can you as judges answer that question? Do you think a colony is legitimate? And if not, what consequences does this have for the legal process? The Netherlands still pretends that the Indonesian archipelago was legitimate Dutch territory.

The reason that the session of 17 December was the proverbial last straw for me has to do with the shameless and disrespectful way in which the Dutch State speaks condescendingly about the documents provided by Indonesian relatives, as if they were inferior to Dutch evidence. I find it appalling how people talk about a letter in the spelling of a name. People were forced to identify villagers who were murdered without trial, and the State is talking about the spelling of names? Linguists agree how oppressive these types of language games are. In doing so, the Netherlands still shows its colonial face in 2019. I am thinking here of the NIMH, which is conducting research to the count of 4.1 million euro in taxpayers’ money, while at the same time facing us in court. Their advice shows that they believe that Dutch archive documents are binding. This is in contradiction with the judgment of this past October 1, where it can be read under point 1.3 that the Dutch registration system at the time was very flawed.

The Dutch State should know how inhumane the policy it imposed was on a population of millions: during the colonial occupation of Indonesia, 70-100 million people were not considered human. At public places of entertainment there were signs with the inscription: “prohibited for dogs and natives.” Indonesians never asked for hundreds of years of oppression by the Netherlands! Through cruel divide and rule techniques, the Dutch separated whole areas, villages and families, sowed divisions, executed people and killed them as if it were nothing. During Ramadan, villages were attacked by the Dutch soldiers and the colonial Army (KNIL.)

Colonialism is about injustice that you as judges should address. I keep repeating it: where does the Netherlands get the right to regard a country that is 18,000 kilometers away as Dutch property! On March 8, 1942, in three days time, the Japanese on their bikes drove the Netherlands out. So, after 1945, the Netherlands no longer had any business being there. Before the Netherlands was occupied by the Germans and the Japanese, they themselves were occupiers. With the knowledge of what it feels like to be occupied by a foreign power, and while their own cities were still bombed out, the Netherlands continued to accumulate their wealth. It comes as no surprise to me then that the Dutch assisted the German occupier in their persecution of Jews. Dutch wealth is not halal. The Netherlands is a robber state, the Dutch are thieves.

In 2016, the NIMH published a list of 350 names, the full names of people who were executed and killed, who executed them and where. The K.U.K.B. foundation has proposed to the State to investigate the list together. This proposal was rejected outright because the State says it wants to wait until the research project that is costing 4.1 million euro in taxpayers money has been completed. This is how the Dutch State deals with people, who will all be dead without a doubt by that time. The investigation is clearly intended to feign responsibility (just like the List of Excesses from 1969), to keep up appearances while the State opposes justice towards victims in the courtroom.

It is a fact that our independence of 17 August 1945 has not been recognized by the Dutch occupier. As judges, you know that better than anyone, since Dutch legislation designates Indonesian relatives and victims up to and including 1949 as Dutch nationals. This is contrary to the Indonesian constitution which regards them as Indonesian citizens for the period of 1945-1949. It is disrespectful that the Netherlands does not want to acknowledge its mistakes, once again, in these court cases.

I understand that it is unusual to send a personal letter to a court. Nevertheless, I have made this decision because I want you to think about the fact that this whole process goes beyond individual cases. This is about something very big, about legal consequences of the centuries-long illegal occupation of someone else’s country. The debate about names, the questioning of Indonesian evidence, the use of the 1949 law, all testify to colonial thinking. It is clear: the perpetrators make the laws, but legitimate it is not!