Indonesia has agreed to strengthen bilateral cooperation with the Netherlands, its key partner in Europe, after President Joko “Jokowi” Widodo welcomed Dutch Prime Minister Mark Rutte at the Bogor Palace in West Java on Monday.

Monday’s visit marked the third time Rutte has been to the country after official visits in 2013 and 2016 and came after a recent ruling by an appeals court in The Hague that lifted the statute of limitations on alleged executions by Dutch soldiers during the Indonesian struggle for independence.

Speaking at a joint press conference, Jokowi said the Netherlands was one of Indonesia’s key European partners, adding that he had also used the meeting to voice concerns about the European Union’s policy on palm oil.

“In terms of trade, we agreed to continue to improve open and fair trade. In this context, I again conveyed Indonesia’s concerns about the European Union’s policy on palm oil,” he said, adding that he also appreciated a recently signed agreement between Indonesia and the Netherlands in New York, the United States, which would further support palm oil smallholders carrying out sustainable production practices.

Rutte, meanwhile, said the two countries had agreed to step up their cooperation in strategic areas such as health care, water management and higher education, adding that there were many potential areas in which Jakarta and Amsterdam could deepen their ties.

“There are many more areas where we have real potential, like climate action and waste management,” said Rutte. “I hope that together, we can seize — and we will seize — this opportunity.”

Notably absent from the issues discussed by Jokowi and Rutte was the recent ruling handed by a Dutch appeals court in The Hague for a case brought by five Indonesians seeking compensation for the execution of their fathers by Dutch soldiers in South Sulawesi in 1947.

It was a disappointment for activists advocating for the victims’ descendants in cases of war crimes allegedly committed by Dutch forces during the Netherlands’ military aggression in Indonesia between 1945 and 1949, even though the appeals court had lifted the statute of limitations, making the cases eligible to be heard in court.

The Committee of Dutch Debts of Honor (K.U.K.B.), a foundation that assists victims and survivors in filing lawsuits against the Netherlands for war crimes, had said it hoped to attract the attention of Rutte and have him admit that the Dutch were responsible for military aggression between 1945 and 1949.

“I was disappointed with that. Even though they are civil lawsuits, the plaintiffs are Indonesian citizens,” K.U.K.B. chairman Jeffry Pondaag told The Jakarta Post on Monday.

He went on to say that activists and the public should take action if Indonesia was unable to discuss the matter with the Dutch government.

“It is sad to see our [citizens] being neglected [by our own government].”

Rutte’s visit to Indonesia, however, was limited to issues related to future agreements between the Netherlands and Indonesia, said the Foreign Ministry’s acting American and European affairs director general, Teuku Faizasyah.

He said the Indonesian government was in a position “to monitor” any progress in cases involving civilians, adding that Indonesia respected any efforts made by the Dutch government in reviewing and studying various incidents related to the 1945-1949 aggression.

“The government will not be [directly] involved in the [legal] processes,” Faizasyah said when asked about how the government played a role in such cases.

At a separate discussion hosted by the Foreign Policy Community of Indonesia (FPCI) on Monday, Rutte spoke about ASEAN and the Indo-Pacific strategy as a bright example of rule of law, such as upholding human rights and maintaining the essence of freedom.

The Dutch premier was ushered out immediately after his keynote and did not take any questions.

The Dutch Embassy told the Post on Saturday that the Netherlands was carefully studying the appeals court’s ruling, in line with Faizasyah’s comments.
—
(Dian Septiari contributed to the story) 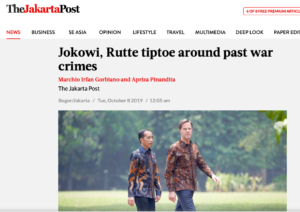