Listen to the Indonesians

The book ‘De brandende kampongs van Generaal Spoor’ [The burning villages of General Spoor] by Rémy Limpach is understandably causing a stir. Executions, destruction and systematic violence, hidden for 70 years, are now being exposed. Finally the Netherlands is able to come to terms with the past.

Reactions from Indonesia are lukewarm, you can even say: there is hardly any reaction. The reason for this, as critics suggest, is because Indonesians themselves have blood on their hands too: from the Bersiap period to the mass murders of 1965 and the bloody suppression of revolts in for instance Papua or East-Timor.

There should be a large historical investigation in Indonesia as well, is being argued, for instance by Bart Schut. No stones should be left unturned so that Indonesia can come to terms with the past as well.

Then The Netherlands and Indonesia can discuss their shared history without taboos and then… Everything will be all right.

But would that really be the case? I spent the last seven years traveling through Aceh, looking for remains of the Aceh war (1873-1942), the other large colonial war in which The Netherlands was involved. Executions, destruction, and systematic violence – the old Aceh reports read like templates for Limpach’s research on the Indonesian war of Independence.

Contemporary Aceh is still marked by the war against The Netherlands, in hundred different ways I couldn’t have imagined before. The descendants of the sultan, who was captured by general van Heutsz, are now managing a shabby restaurant. The interior lands that were depopulated by Van Daalens, are still depopulated. The battle hymns about the infidel Dutch are still being sung.

The violent specifics of this war are told and retold so often that reality and myth cannot be separated any longer. That the Aceh war is almost forgotten in The Netherlands caused so now and then disbelief and sometimes indignation among the people of Aceh, but more often I encountered indifference. I rarely heard a call for apologies, financial compensation or serious historical research.

‘It is our war, in our country; we had to find a way to deal with that’, a history teacher from the Siyah Kuala university in Banda Aceh tells me when I ask him about this. ‘Once the Dutch were so arrogant to attack us; it would really be arrogant if, after all these years, they would tell us how to deal with the inheritance of those attacks’. Historical research by definition deserves our support. It is useful to know what exactly happened on both sides of the Indonesian war of Independence – moreover, that is precisely the kind of research people are doing at the KITLV in Leiden, so Bart Schut’s wish will be granted.

But would it, in the interest of friendship and reconciliation, not be more meaningful to listen to what the contemporary Indonesians have to say about their past and in which way they want to deal with that? After all, the war took place in Indonesia and is part of Indonesian history in the first place – but that perspective is almost completely lacking in the Dutch discussion on violence in the former Dutch East Indies.

‘Historical navel-gazing’, a term once coined by writer David van Reybrouck, and I can only agree with that. 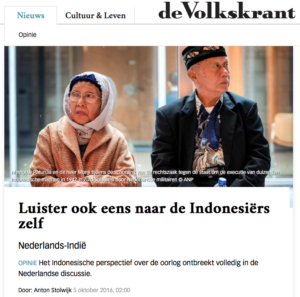