Marten Toonder is writing his memoir. The creator of Tom Poes prepares for his third book in Irish solitude. Already as early as the beginning of 1992 he wrote a letter to Lo Hartog van Banda, his faithful right hand man, with whom he would keep Tom Poes and Ollie B. Bommel alive for 14 years.  ‘Dear Lo, would you mind if I report on the background of your internment?’

The answer from The Hague, on July 24, 1992: ‘Dear Marten, I have no objection whatsoever. It was painful, but it’s actually the best thing that happened to me during the war. I wouldn’t have survived either the Germans or the Japanese otherwise.’

The story of Lo(dewijk) starts in the mid-30s at the art school of The Hague; a study he has to cut short. ‘My parents were divorced. When my mother died I didn’t want to depend on a scholarship. I lost my footing, I had no reason to stay in the Netherlands anymore.’

But where to go instead? Lo Hartog van Banda got part of his name from the Moluccan island Banda, where his ancestors were ‘perkeniers’ – owners of nutmeg plantations.  He chose the Dutch Indies. He sold some jewelry from his mother and embarked on a Japanese freighter.

Upon arrival in Sumatra Lo’s education at the HBS and a few months of art school gets him a job as advertising department chief at thé newspaper of Medang: the Dcli, where he treated his ‘madoer’ (chief of a group of natives) and his employees with unprecedented respect. ‘I hated the colonial ethos. If you looked over your shoulder on the streets you could be sure that there were natives walking behind you pulling their bicycles by hand. It was forbidden to pass the white man. Me carrying a clerk on the back of my bike every morning was of course beyond all protocols.’

The annoyances were adding up, but one important incident would stigmatize Van Banda as an anti-colonial: a classification that equaled an enemy of the state. Passionate as he was he developed a formula that would increase the ad revenue with 10 %. A large circle that contained several advertisers. Technically it was a complicated job.

The mandoer announced that he believed in the idea. The head of the printing office thought it was nonsense, like he thought everything to be nonsense. The plan had to be forced but was executed successfully. The Dutch board of directors showered Van Banda with compliments and rewarded him with a staff position.

‘But I thought it more important that the already underpaid natives would share in the proceeds,’ the tawny man adds while he squeezes his eyes fiercely, with over fifty years of combativeness. ‘I had seen those men toiling all night long. I had smelled their sweat. When I advocated with the administration they told me that those apes should simply continue working or otherwise get lost. Only one man resigned: me.’

In 1941 Lo moved to Java, where the intelligence office detained him immediately after arrival. ‘I had clearly made enemies.”

This private war was overshadowed by what was happening in Europa in the meantime. Germany had brutishly invaded The Netherlands. It is a rather unknown fact that in the thirties the Indies also contained a few thousand NSB members. The government had never distrusted that group before. When the atrocities of their Dutch colleagues were discussed more frequently at parties and bridge evenings ‘Indie NSB members’ dropped out in large numbers. A small hard core group that did not disavow the national-socialist ideology preached by Mussert in The Netherland remained. After the war in the Indies they immediately fell prey to a witch hunt.

‘Initially they left us, the anti-colonials, alone, but that changed when Japan started the war shortly after. The leadership in the Indies was afraid that we would make a pact with this aggressor. And lo, these difficult guys were also detained without trial; I was pretty much the first.’

The story of the 77 year old Lo Hartog van Banda is a shameful part of our national history. He was captured in 1942 and held in detention for two years. Afterwards he was shipped to Suriname where he spent four years in a penal colony under inhumane conditions. All this without any semblance of due process. His crimes? Banda had behaved in an anti-colonial way…

NSB members, naturalized Germans who had not hurt a fly, and a few anti-colonials including the grandson of writer Douwes Dekker because he had founded schools for natives, were imprisoned in camp Ambarawah in Java. No official indictment, no trial, nothing. They couldn’t keep Lo Hartog van Banda down anymore. He became more and more recalcitrant and refused to participate in what he now calls ‘a complete madness’. He was dragged from camp to camp. He set beds on fire and tried to escape unsuccessfully. When he went on a hunger strike for eighteen days they wanted to get rid of this man in the Indies. A plan was hatched to put all these ‘disruptive’ elements on a one-off convoy to Australia. By then Van Banda was already imprisoned for two years.

For this purpose the passenger ship Tjisadane was chartered. On January 21, 1942, 146 very emaciated prisoners shuffled on board. Under the watchful eye of marines they were tucked away, far from the tropical sun and fresh air. ‘Below deck a special cage was ordered,’ Van Banda says. ‘The captain was told that he was to transport very dangerous criminals. One of my fellow prisoners had a talk with that captain later. He characterized that voyage as the strangest of his career and recalled that torpedo heads were mounted underneath the bunk, with a detonator that could be operated from the cockpit. If we were attacked during the voyage to Australia he was supposed to push the button. Under no circumstances were we to escape alive.’

It was a risky journey with an enemy fleet around. It quickly became apparent that the mixed convoy had to divert due to the Japanese domination in the Java Sea. The course was changed to Suriname. ‘Forty horrible days under constant surveillance of the marines with their tommy-guns. We had no privacy whatsoever. Even on the latrine the other prisoners were able to see you. It turned out that we sailed through several minefields during that voyage.’ 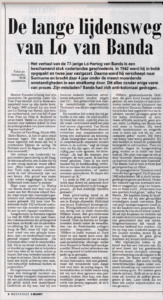 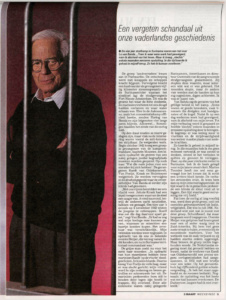 A forgotten scandal in our national history

Those four years detention in Suriname were a living hell for Lo van Banda. ‘After another refusal to work I said goodbye to life. But I ‘just’ got several months in solitary confinement. I turned inwards in those times. That is how I was able to survive.’

The group ‘traitors’ arrived in Parimaribo. The disembarkation was reinforced with clubs and kicks. A coaster brought the prisoners subsequently fifty kilometers upstream the Suriname river where the final destination was located: the correctional facility Fort New Amsterdam. This was the green hell where the heat was scorching, the marines had made bullying into an art and where water was scarce. There, in the savannah of the Jews, as the concentration camp was officially named, Hartog van Banda and his peers would stay for four long years. Although… some would not make it to the end of the war.

Eventually they would be beaten down, but shortly after the internment the anti-colonials were particularly combative. They refused to work. Early October 1942 a small group of prisoners got a bizarre assignment from the camp commander captain Mouwen: the graves of a nearby Jewish graveyard had to be opened. In search of ‘the jewelry these old Jews might have been buried with.’ The prisoners Raedt van Oldebarnevelt, Van Poelje, Kraak and Stulemeyer refused. They were thrown in the same punishment cell where the unyielding Van Banda had taken up residence before.

‘The five of us prepared to escape. Johnie Kraak had brought a spoon with a handle that was made into a tiny saw.  We sawed night after night, while the others hummed softly. At ten o’clock in the evening on November 4th 1942 the boys managed to escape. I myself was put apart just the day before,’ Van Banda says. ‘I was only able to give them my watch, that would perhaps allow them to buy a ticket. It was a horrendous venture. My friends were caught again; on behalf of superior general Meijer, well known to us from the East Indies, who was now the territorial commander in Suriname.’

For the first time the grayish man fumbles for words: ‘On behest of their superiors two marines shot and killed Raedt ‘in pursuit’. In cold blood. After that Van Poelje got the brunt of it, but the aim was off; my friend was hit in his lower back and legs and cried out. The marines tried to keep him quiet by kicking him on the head. He died. All that upheaval alarmed the nearby encamped Surinamese, Americans and director Gummels of the adjacent penal colony. They put a stop to this madness, but everyone knew what had happened. The killing ceased, but the remaining four were tied up with their hands on their backs and incarcerated for days on end.  I was devastated.’

Van Banda was well aware of the dangers caused by the erratic policies in the camp. ‘There were some good guards, but most were tyrants who threatened with hand grenades or execution. One day after another refusal to work I said goodbye to my life. To my astonishment I was spared and held in solitary confinement for ‘only’ several months. I understood that there was little left to escape for and the fighting spirit of the past gave way to other forces.

Thus I turned inwards. I never knew a single moment of boredom in those months, there was so much to think of, so much digging to do in the past and so many boundaries to push. There, on those few square meters in Suriname, I laid the foundation for my future creativity. Marten Toonder once asked me how it was possible that I never experienced writer’s block. The stories just flowed out. I reminded him then of my internment: the times when I tried to explain the color red to a blind man in my mind.  A time when mind-expansion kept me free.’

Only after the war was long over this large group of people, who were once wrongfully transported from the Indies, was released. That happened in July 1946. The Netherlands had no idea what to do with this group. There was a sense of guilt, slowly acknowledged. Superior general Meijer had been tipped off and had fled to some obscure country in South America. There would be no sweet vengeance to be taken on him, and neither on the killing marines. According to the law the case was time-barred and they had just followed orders. But within the group repressed anger was growing. The Dutch government must have been aware of that, because after the widow Raedt van Oldebarneveld filed a lawsuit for war crimes, they issued a note in 1952 to all concerned. There was a restitution of five hundred guilders waiting at the town hall. ‘So I just picked it up and thanked the people at the town hall. Once more: the detention was the best thing that could have happened to me. I would not have survived the Germans and the Japanese.’