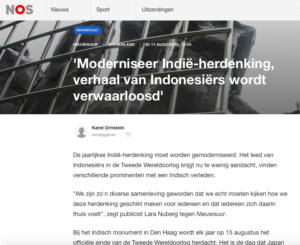 The annual Indies commemoration must be modernized. The suffering of Indonesians in World War II is receiving too little attention at the moment, according to various prominent figures with a Dutch Indies past.

“We have become such a diverse society that we really have to see how we can make this commemoration suitable for everyone, with everyone feeling at home in it”, publicist Lara Nuberg tells Nieuwsuur.

Every year on August 15, the Indies monument in The Hague commemorates the official end of World War II. It is the day that Japan capitulated. All victims of the Japanese occupation of the Dutch East Indies are commemorated. Nuberg, former minister Ben Bot and actor Thom Hoffman think that the ceremony is outdated and should be changed.

“You have to listen to the voices in society,” Hoffman says. “It’s about Black Lives Matter, it’s about racism. You have respond to that and that means you have to change the way you commemorate.”

Between 1941 and 1945, millions suffered under the Japanese reign of terror in the areas of East Asia conquered by Japan: there was violence, hunger, terror and humiliation. Tens of thousands of Dutch people in the Dutch East Indies were detained in internment camps. Former Minister of Foreign Affairs Ben Bot was in a Japanese camp as a child. But he also thinks that the commemoration should focus more on the story of the Indonesians. “That group has been somewhat neglected so far.” He believes that the fate of the romushas, ​​the Indonesian forced laborers who worked for the Japanese, should be mentioned much more emphatically. Tens of thousands of them died in the construction of railway lines, for example.

There is also criticism of the symbols that mark the Dutch colonial past. Soldiers of the Van Heutsz regiment form an honor guard at the commemoration for example. While the regiment’s namesake played a leading role in the bloody war in Aceh province around 1900. Nuberg: “The Van Heutsz regiment plays a major symbolic role during the ceremony. That sends quite a mixed message because Van Heutsz made tens of thousands of victims. Not among the Dutch population, but among the population of Indonesia.” Former minister Bot thinks that the role of the regiment could disappear “over time”. “We don’t have to cling to something that means a lot to many people. Talk to Royal Netherlands East Indies Army (KNIL) veterans and military: should it keep being done this way or could you replace it with something else of equal value?” Thom Hoffman recently published a photo book about the history of the Dutch East Indies. The photos are currently on display in the Wereldmuseum in Rotterdam.
—