Dutch government: new research to violence in Indonesia in the late forties

There will be a new investigation to the Dutch violence in Indonesia that was committed during the late forties. Recent research revealed that Dutch soldiers used ‘structural violence’. Tomorrow the government is talking about a proposal for a new major study, as sources reported to RTL News.

According to the researcher, not every Dutch veteran is guilty: the majority of the soldiers did not use excessive force, still thousands of incidents took place due to the lack of resources and manpower. Previous research in 1969 still used the term ‘excesses’, but in Limpach’s study he talks about ‘structural violence.’

It was Dutch Minister of Foreign Affairs, Mr. Koenders, who insisted on a new, large study to this period. Earlier he called the period of the [Indonesian] decolonization war rather a “black page in Dutch history.”

Hennis, the Dutch Minister of Defence, wants to avoid that Dutch veterans feel insulted by the investigation. Therefore, not only the actions of the Dutch will be examined, but the researchers will also examine the so-called ‘Bersiap period’. This is a violent period in the Dutch East Indies by Indonesian freedom fighters after the Japanese capitulation. The right-wing liberal VVD party insistently requested this to prevent that an investigation will not just look at Dutch abuses of violence only.

The government is optimistic that Indonesia will cooperate and wants to open their archives too. Several agencies are responsible for the investigation. Including researchers of the Dutch Institute for War Documentation (NIOD) and the Dutch Institute for Military History (NIMH). after the Cabinet meeting it is expected that the Dutch government will announce the other institutions that will provide researchers. 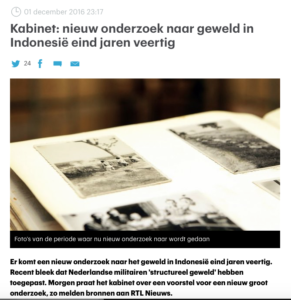