Not All Summary Executions Are Created Equal

Human rights and executions are in the news, and MP Sjoerd Sjoerdsma of center-left party D’66 has been working hard. On 21 June he submitted a series of questions to the Minister of Foreign Affairs after a UN report on the execution of journalist Jamal Khasjoggi. On June 29, he denounced the Dutch queen’s visit with Mohammed bin Salman, the crown prince of Saudi Arabia who was involved in Khasjoggi’s summary execution. And on Monday, July 1, he discussed Dutch human rights in Parliament, Khasjoggi, the Rohingya genocide, and the responsibilities of the Netherlands as a “beacon of light”.

In there were a few days, however, where Sjoerdsma had a harder time understanding human rights.

On June 26, Sjoerdsma attended a meeting of the standing committee of Foreign Affairs where MP Sadet Karabulut of the Socialist Party invited two “children of Sulawesi” whose parents were summarily executed by the Dutch state in Indonesia.

Andi Monji (now 82) was a boy of 11 when he witnessed, from up close, how members of the Dutch Special Forces shot his father in the head. I. Talle was 3 when her house was burned down by the Netherlands and her father was taken away. His body was carried back later that day, wrapped in cloth. Mr. Monji and Mrs. Talle are in the Netherlands to get restorative justice.

Sjoerdsma was one of few committee members with the heart to welcome them. The queen who visited bin Salman did not come to shake hands with the victims of the greatest war crimes of her country. Neither did prime minister Mark Rutte or the minister of foreign affairs. Painfully absent were government coalition parties CDA and Christian Union with their Christian values, and VVD with its vision of a free society. And Pia Dijkstra, chairperson of the standing committee who opened a human rights debate on July 1 without mentioning that July 1 is Dutch emancipation day, walked in when the meeting was done, for another reason. 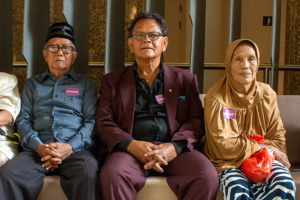 The Netherlands and Saudi Arabia

Absence was not the only moral crime committed by the standing committee.

The same Sjoersdma who asks his minister to be a good UN member state and examine Khasjoggi’s execution under international law, suggested at the June 27 meeting that we consider justice for Monji and I. Talle “on an individual level” and definitely not in a larger judicial context. No colonial ethnic cleansing, no human rights violations. Simply two people who happen to have lost their fathers.

In other words, not all summary executions are created equal.

A day later on June 27, the victims of our colonial war crimes were in court in The Hague. Jeffry Pondaag, the man who works tirelessly for their restitution, was with them when the Dutch state explained that their life trauma had passed the statute of limitations.

As children of the executed, Monji and I. Talle cannot get justice through a government settlement policy where widows of men executed in the Indonesian War of Independence can claim (and are often denied) damages. MP Karabulut is currently asking the government to pass a motion to extend the policy to children and do away with time limits.

It is an important motion. Although the Netherlands now acknowledges its colonial guilt here and there, the restrictions placed on restitution are and remain a mechanism for preserving Dutch colonial innocence. And feigning colonial innocence is a large cultural phenomenon in Dutch politics, media, and culture.

Similarly, colonial power relations are still covered up in the Netherlands. Same columnist Thijssen calls the executions “retaliatory actions”, as if they were reactions to Indonesian violence rather than war crimes resulting from hundreds of years of Dutch racial oppression.

Even in Trump’s US, a national newspaper would face a national scandal if it called the attack at Wounded Knee a retaliation for Lakota violence. Colonial thought still rolls unabashedly off the Dutch tongue.

I am relieved therefore to hear when the children of Sulawesi have left the Dutch lion’s den.
[the lion is the Dutch monarchy’s symbol, comparable to the bald eagle in the US]
—
Dr. Annemarie Toebosch is heading the Dutch and Flemish Studies program at the University of Michigan