Japan capitulated, but we re-occupied the Dutch East-Indies

Not clearly identifying the colonial context in which World War II took place in the Dutch East Indies, is misleading for the average, uninformed Dutchman, argues Marjolein van Pagee.

This week the history of the Dutch East Indies was in the spotlights again. Two dates: 15 and 17 August, first the capitulation of Japan, the second the declaration of Indonesian independence. Although many people have been silent about Dutch colonialism in the Dutch East Indies, since the eighties the Japanese capitulation is annually commemorated in The Hague. For the average Dutchmen on the street, however, it is not always clear what the ‘Japs’ have to do with Dutch colonialism. To put it bluntly: the focus of the Dutch East Indies commemoration is on victimhood. Although Dutch colonialism as a whole, and particularly the so-called “police actions”, refers to perpetrators. Apart from the difference in perception, what these two summer days have in common is that both are hardly known in The Netherlands.

On August 11, columnist Zihni Özdil asked in this newspaper if anyone dared to address the sacred cows in the Netherlands, concerning national history. He took the lead by naming the then Minister of War, a war criminal. Hereby I dare to poke another sacred cow. I want to discuss victimhood, which is nationally commemorated in the Netherlands when it comes to the Dutch East Indies instead of the Dutch role as perpetrators.

The Foundation ‘Memorial August 15, 1945’ commemorates the end of WWII. The Dutch motherland was actually freed from the German occupation on May 5, 1945, which has been the official National liberation day until now. However the Dutch colony in Asia was liberated from the Japanese months later on August 15. By the capitulation of Japan the Dutch and Indo-European became free again after several years in captivity.

That same capitulation encouraged the Indonesians to declare their independence on August 17. Against the will of the Netherlands who, first with the help of the British, tried to restore colonial rule again.

Biggest military operation of the Netherlands

Rotterdam was still in ruin when more than one hundred thousand soldiers were deployed to put the Asian archipelago under the Dutch rule again. A colonial war that was euphemistically called ‘police action.’ Only in 1949 and with a ransom of 4.5 billion guilders, did Indonesia gain its freedom.

In general, the Dutch Indies community in The Netherland has less affinity with Indonesian victims of Dutch war crimes. This group feels ignored in their suffering from what the Japanese had done to them between 1942 and 1945. In addition, they feel mistreated and neglected by the Dutch government because of the unfriendly reception in the Netherlands afterwards. Thus, during the commemoration only victimhood is remembered and it is not mentioned in what kind of colonial context the misery took place. The problem is that the Japanese occupation of the Dutch East Indies was not an isolated event. By not naming the colonial context in which this misery took place, the average, ignorant Dutchman is put on the wrong track. In this commemoration, Japan, and not the Netherlands, is the aggressor. As if the perpetrator-role of the Dutch in the Dutch East Indies was only reserved for the veterans who served there between 1945 and 1949.

Who can explain on August 15 in The Hague that the Dutch East Indies as a whole was a colonial project by which the inhabitants of the large archipelago were suppressed for centuries? A colonial project that was only interrupted by the Japanese invasion to be resumed again after the capitulation. Who explains the uninformed Dutchmen how August 15 was not the end but a continuation of military force? How those same victims could turn into perpetrators?

On the monument in The Hague, “a symbol of struggle against oppression and terror” is set in stone. However, this oppression does not refer to the Dutch but only to the Japanese terror. Since 1980, an annual memorial is held in The Hague to raise awareness around the victims. Last year, King Willem-Alexander and Prime Minister Mark Rutte were present as high-ranking guests. But would they also place wreaths when Indonesian war victims were present? Of course, a commemoration is always selective, you cannot remember the suffering of the entire world, but there is more going on here.

When it comes to Dutch war crimes in Indonesia, Rutte consistently says that he does not want to focus on the past, he wants to move forward to the future. In 2013, he refused to express the legally enforced apologies to Indonesian widows during his visit to Indonesia. Instead, one month prior to his visit the Dutch ambassador in Indonesia was ordered to do so. Remarkably, on August 15 he is willing to commemorate the past. As long as the colonial context, and the roles of the Dutch as perpetrators, is not predominant.

There was famine; there was lack of clothing

It is often said that war is not black and white; it is not simply the good against the evil. But before The Netherlands is ready for nuance, we first need to set the historical context straight. The message of how we suffered there, how cruel the Japanese and Indonesians were, cannot be maintained unless this victimhood is placed in the context of Dutch colonialism. In a country that suffers from the ‘best-boy-in-class-syndrome’, it is dangerous to only focus on Dutch victimhood in a national commemoration of that period. While it is true that the suffering of the Dutch and Indo-European is not Dutch common knowledge either, the focus on suffering is blurring our national narrative on this period.

Each suffering is worth telling and nuance is needed, but not without having revised the national self-image first. Sacred cows need to be addressed; painful connections need to be made. Rutte is visiting Indonesia again in November this year and it does not look like he’s going to be there to commemorate the past, as he did at the Dutch East Indies monument in The Hague. 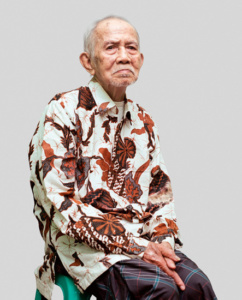 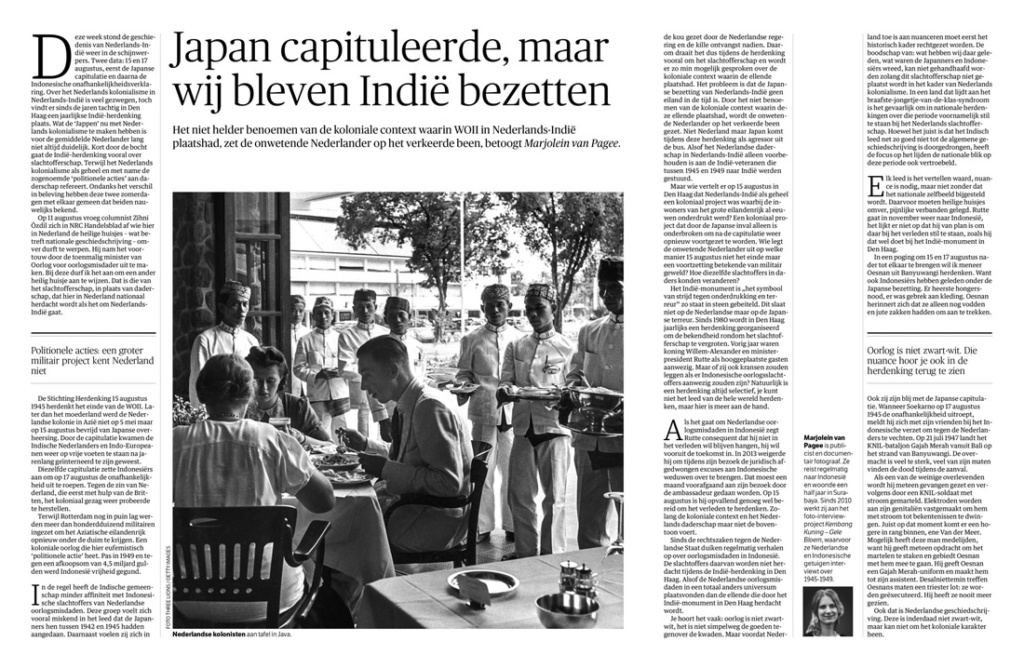 In an attempt to bring 15 and 17 August together I want to commemorate Mr. Oesnan from Banyuwangi as well as other Indonesians who suffered under the Japanese occupation. There was famine and lack of clothing. Oesnan remembered that they only had duds to wear. They were delighted with the Japanese capitulation. When Sukarno on August 17, 1945 proclaimed the independence, he and his friends joined the Indonesian resistance to fight the Dutch. On July 21, 1947 the KNIL battalion Gajah Merah landed from Bali on the beach in Banyuwangi. The fight was not fair, the KNIL too strong and many of his comrades were killed during the attack.

As one of the few survivors, he was immediately imprisoned and tortured with electricity by one KNIL soldier. Electrodes were attached to his genitals in an attempt to force him to confess. Just then a commander with higher rank entered the room, his name was Van der Meer. Possibly out of pity, he immediately ordered to stop the torture and commanded Oesnan to go with him. Van der Meer gave him a Gajah Merah uniform and appointed him assistant. Oesnan’s friends were not so lucky: they were executed. He never saw them again.

This is also Dutch history. History is indeed not black and white, but at the same time we cannot ignore the colonial character.

—
Marjolein van Pagee is a publicist and documentary photographer. She regularly travels to Indonesia and lived half a year in Surabaya. Since 2010 she is working on photo-project ‘Kembang Kuning – Yellow Flower’, in which she interviewed Dutch and Indonesian witnesses about 1945-1949.