OPINION: The Paradox of the Bersiap 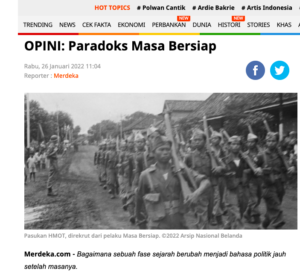 A few years ago, I attended an annual event hosted by the Dutch Embassy at the Menteng Pulo Cemetery, South Jakarta. Before the event started, I was drawn to the row of white tombstones at the corner of the cemetery. There are names of teenagers and babies (this can be known from their ages, written on the white cross tombstones).

As I was standing in front of the tombstone of a 4 year old baby boy, a Dutch person who was also there suddenly approached me. With a gloomy face, they told me that those graves are those of the victims of the ‘Bersiap period’, a time where innocent Dutch and Indo people were slaughtered by indigenous Indonesians between 1945 and 1946.

Most of the Dutch (and Indo) people with whom I have spoken, always behave the same way when talking about the Bersiap period. Without a doubt, for them, that period was an unforgivable crime. My impression: their tone of voice when they mention the word ‘bersiap’ is the same as when a human rights activist mentions the word ‘apartheid.’

I never doubted the brutality. Of course, the sources I have spoken to mentioned a variety of sadistic practices beyond human comprehension that occurred during the incident. But is that human tragedy separate from our history? Is barbarity a characteristic only found among ‘inlanders’ as a form of their primitiveness? I believe we need to discuss this further.

The division of society into these different castes certainly had an effect on day-to-day life during that period. For example, inlanders were not allowed to visit areas designated for Europeans, like what was portrayed in the film Oeroeg (1993) by director Hans Hylkema. Allegedly, a sign that read “Verboden voor honden en inlanders” (Forbidden for dogs and inlanders) was placed at the entrance of a swimming pool that was designated for (Dutch) Europeans only at Manggarai, Batavia.

For dozens of years (unofficially, for hundreds of years), ‘inlanders’ were treated as sub-humans. This led to more and more feelings of pain and humiliation deep within their minds. Yes, before the British and Americans enforced racism, the Dutch in the Indies were at the forefront.

Sukarno, the person hated most by the Dutch at the time, was one of the victims of racism. When sharing a love story from his youth to a young Chinese delegate who visited his palace in February 1964, Sukarno talked about the racist treatment he experienced by a Dutch person.

“When he proposed to a Dutch girl, he was rejected and called “vuile Javaan” (dirty Javanese),” wrote Soe Hok Gie in Catatan Seorang Demonstran. (A Diary of a Demonstrator)

Bung Karno (Sukarno) once told this story to writer Cindy Adams. Sukarno said the girl’s name was Mien Hussels, who in his eyes, was very beautiful and charming.

“I was madly, wildly, insanely in love with this yellow-haired, pink-cheeked tulip. I’d cheerfully have died for her if she’d asked it,” (cited from Sukarno: An Autobiography, compiled by Cindy Adams.)

Sukarno was determined to marry Mien. One day, wearing the best clothes and shoes he owned, Sukarno came to Mien’s house and with trembling lips, he asked for Meneer Hussels’s blessing.

“You? A dirty native like you? “How dare you even come near my daughter. Out, you filthy animal. Get out!” Hussels shouted.

How sad and angry Sukarno was after being treated so harshly by Mien’s father. He believed that he would never forget the humiliation he felt for the rest of his life.

Did the violent people who killed the elderly, toddlers and women between 1945 and 1946 share similar (or perhaps, even more tragic) stories like Sukarno? Possibly.

Dutch people have never known (or perhaps, they do not want to know) the historical fact that the brutality, which took place during the Bersiap period, was not a policy adopted by the Republic of Indonesia’s government at the time. It would be incredibly ridiculous if the Indonesian government, who needed international recognition, would involve itself in the bloody massacre of people whose country was a victor of World War II.

Instead of supporting the massacre, the Indonesian government under Prime Minister Sutan Sjahrir’s leadership actually ordered its army and police to protect the Dutch people who were in several internment camps. This was written by a Dutch historian, Mary C. van Delden, in her dissertation at Radboud University entitled, De Republikiense kampen in Nederlands-Indië, Oktober 1945-Mei 1947: Orde in de chaos? (The Republican camps in the Dutch East Indies, October 1945-May1947: Order within chaos?)

“If the Indonesian army had not intervened and helped to protect those internment camps, I believe that many more lives would have been lost,” Van Delden writes.

Even the Dutch glossed over what Rémy Limpach wrote in the book Kekerasan Ekstrim Belanda di Indonesia (Dutch Extreme Violence in Indonesia.) According to Limpach, the Dutch government adopted a double standard when it comes to the Bersiap period. This can be seen in 1947, when their military recruited the Panji group (that was allegedly involved in the Bersiap period in Batavia and Bekasi) to join the HMOT (Hare Majesteits Ongeregelde Troepen / Her Majesty’s Irregular Troops).

On July 21, 1947, the HMOT was involved in the Dutch regular army’s military invasion of Indonesian territory during the first Dutch Military Aggression[1].

Known from the start as bandits, they later became a frightening specter for Indonesians. They did not hesitate to kill, rape and torture fellow Indonesians.

“The colonial rulers gave them weapons as well as temporary immunity to fight under the Dutch flag against their own,” said Limpach.

Perhaps this writing might be considered as an attempt of whitewashing, but these are the historical facts. For me, the Bersiap period cannot be viewed as the ‘dark destiny’ arising from the barbaric behavior of Indonesians. It is not that simple. Political language plays a role here.

It remains to be seen how far the sensible Indonesian and Dutch people will think that it can have an impact on the humanitarian relations from generation to generation in both countries.