Traveling with a pebble in your shoe

Gert Oostindie wrote a book about the decolonization war in Indonesia. He recently travelled to Indonesia and spoke with historians about his book that reveals an emotionally charged past.

Seventy years after the war they went to Indonesia to gauge the mood. Gert Oostindie, professor of colonial history in Leiden travelled together with Ireen Hoogenboom, one of the two researchers who assisted him in composing ‘Soldier in Indonesia 1945-1950 – Testimonies of war on the wrong side of history’ (2015). This book is based on letters, diaries and memoirs that Dutch veterans issued individually about the decolonization war in Indonesia. From this never studied material they draw the clear conclusion that Dutch troops used structural violence against prisoners of war and civilians.

This autumn an Indonesian translation was issued by Obor publishers in Jakarta. They invited Oostindie and Hoogenboom to come to Indonesia to discuss (together with fellow historians and students) about a period which memory has been repressed for a long time in the Netherlands while in Indonesia the period faded away a bit from collective memory.

They made a tour visiting fourteen universities on Java, Bali and Kalimantan. They drew full houses everywhere; a young audience that was badly experienced in the matter, although they eagerly asked questions. Together with NRC Handelsblad Oostindie reflect on this trip.

The beginning of the tour was a serious session at the Erasmus Huis, the cultural centre that is linked to the Dutch embassy in Jakarta. The panel was staffed with several heavyweights, including Taufik Abdullah who is now eighty years of age, the ‘éminence grise’ of Indonesian historians. He obtained his PhD in 1971 at Cornell University in New York and for decades he was linked to the Indonesian Institute of Sciences (LIPI), a national think tank. As head of LIPI he set the tone for the national historiography under the New Order government of President Suharto.

Abdullah began his introduction with these intriguing phrases: “Maybe it is because I already follow the development of history writing in this country for a while, but as soon as I read the title of this book, I realized how much has changed. Until now, we were satisfied with the historical understanding that the arrival of Dutch soldiers after the proclamation of our independence was an act of aggression by the former colonizer. Did they not come to us to counteract our proclamation? An attempt to divide the new Indonesian unitary state? Was this aggression not the reason we have hero graves in almost all cities in Indonesia?”

For some time Abdullah continued describing the conception of history that was dictated from above for decades. That took so long that his audience must have wondered what exactly had changed. Then the turn came: “And now there is this book by Professor Oostindie. In his book we are invited to directly meet the ‘eternal enemy’ of the Republic of Indonesia.”

“Until now we knew these soldiers only as instruments of colonialism who wanted to turn back history. But through this book, we are reminded that Dutch soldiers were also ordinary people. Some were really convinced that Indonesia belonged to their country and that it had to be recaptured from Sukarno by the force of arms. But eventually, there were also those who started to doubt whether it was ethical to thwart the independence of a nation.”

Abdullah said Oostindie’s book is “an important and valuable publication, allowing us to better understand one of the most important episodes of our history.” The ‘doyen; expressed his words of appreciation, however he did not plea for an equally critical study to the Indonesian share of violence in those years.

Afterwards Oostindie admits that he was slightly nervous about the contribution of the next speaker in Jakarta: Anhar GongGong (born 1943), professor of history at the University of Indonesia. His father, two brothers and an uncle were summarily executed in South Sulawesi by troops of Captain Westerling. “Gonggongs opening line,” says Oostindie, “was a relief. ‘This book,’ he said, ‘was refreshing for me.’ He found our conclusion that structural violence was comitted, very important. According to him this paved the way for a more open historiography of this war.”

Younger panel members went a step further. Bonnie Triyana, editor of the history magazine Historia, said that the book not only gives more insight in the Dutch perspective, making it less black and white, but it also encourages to discuss violence that was committed by Indonesian side.

Then it was the turn of Abdul Wahid, a lecturer at Universitas Gajah Mada in Yogyakarta, who wrote an introduction to the Indonesian translation of the book. He graduated in Utrecht and was a fellow at Oostindie’s institute in Leiden where he studied the so-called Bersiap-period. This term represents the final months of 1945 when Japan had surrendered and when the Allies did not yet occupy Java and Sumatra. In this power vacuum waves of aggression erupted by republican youngsters directed against Dutch who were still in Japanese internment camps, former Dutch prisoners of war, Eurasians, Moluccans and ethnic Chinese. This episode is completely unknown in Indonesia. Back in Yogya Wahid offered to write articles about the Bersiap in Indonesian language for newspapers and magazines, but they rejected his offer as ‘not very interesting’.

During the meeting in Jakarta, Wahid called the period 1945-1950 “a pebble in our shoe that only joint research can take away”. At one point he asked the audience: “Why don’t we write such a book?” To which Bonnie Triyana spontaneously exclaimed: “I can do that!”

After the session in Jakarta the tour to fourteen universities has started. Oostindie tells about what he noticed during all those meetings. “Students were genuinely interested; they wanted to know how it really went. Because they know very little, they only know a few clichés. We read a selection of quotes from the personal documents of veterans. That worked very well. “Look,” I said, “you derive your image of Dutch from popular movies. In there all “Belanda” are as tall as I am, having a bottle of beer in their hand and harass girls. Sometimes they shoot. “From the letters and diary excerpts we showed that they are people of flesh and blood. They also write horrible things, we have not only picked beautiful quotes. Some soldiers openly begin to question the purpose for which they were sent. Reading out loud quotes was a big hit. ”

Oostindie also criticized other clichés such as the idea of heroic, united people that threw out the Dutch together. “I kept saying that the reality was much more nuanced. Indonesian people were not unified, there was a lot of violence, mutual terror too, all sorts of groups joined the Dutch for many different reasons. It was not just – that is what they do know – about Moluccan joining KNIL. There were also parts of the country that did not want to be ruled by Java, local aristocrats and officials who had had put their fate in the hands of the other side. Furthermore, there were Islamic groups like Hezbollah and Darul Islam, socialists and communists. It was, as I said, total chaos on your side and the outcome was not clear. The atmosphere [during the meetings] was very open; I could say anything. I never came across any hostility or great scepticism. Though you can never measure the latter sufficiently.”

It struck Oostindie that always the question arose whether it was risky to publish such a book [in the Netherlands.] “They asked if we did not receive angry responses or complaints that we threw away the good name of our country. Such a question says more about their society than ours. No, I said, in the Netherlands this would have been much more difficult twenty, thirty years ago, but not anymore.”

Nevertheless, it took a long time before Oostindie’s institute, KITLV, took the personal documents of veterans, which all those years were within easy reach. Oostindie: “I’m not going to deny that. This is partly because the most involved generation almost disappeared by now. I think the previous generation of historians was afraid of negative reactions from the veterans and the ‘Indische’ community as well. Politicians found it very difficult to go against that pressure. Within the civil service there were many former ‘Indies people’, this should not be underestimated. It took a long time before it was possible.”

Oostindie also sees a connection with Indonesian sensitivities. “The restraint, that until recently existed in The Hague, has something to do with the fear of making Indonesia wary. Because the Indonesian government is not very willing to support investigation that can undermine their ‘founding myth’ of a heroic, united liberation struggle. Who knows if one investigation will lead to another, for example, the Communists murders of 1965-’66. However the new generation of historians in Indonesia is not to blame. There is enough interest for research to this complex episode of our common history.” 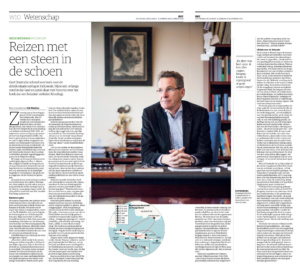