Before you continue reading this letter, allow us to introduce Mr. Eddie Samson first. He is the Chair of ‘the Indo Club Surabaya association’ and has been a member of the Cultural Heritage department of the local government of Surabaya. A few weeks ago through social media we read the news that Mr. Eddie Samson received an award from the History Study Program at Airlangga University Surabaya, on March 28, 2019. He is considered an oral expert of the history of Surabaya and as such often interviewed by many historians, researchers, journalists and students. Not only Indonesians, also foreigners approach him for interviews.

When it comes to research there are a number of historical events that need to be re-discussed. According to us, one of those events is the Flag Incident at Yamato Hotel (now Majapahit Hotel, during colonial times the Dutch called it OranjeHotel). The tearing of the Dutch flag that took place on September 19, 1945 was an event with a huge historical impact, not only for the city of Surabaya but also as starting point of the revolution throughout Indonesia. By hosting their flag on the prominent hotel the Dutch showed their desire to regain colonial rule. This decisive moment demanded our predecessors to choose their position regarding the Dutch.

Most eyewitnesses of the incident have passed away. Nevertheless, there are some testimonies left about what happened. Unfortunately, since 70 years have passed, the record of those testimonies – so valuable to us as educational materials – are quite difficult to obtain. Books, memoirs, and published testimonies are scarce. In fact, most archival data is kept in a building that is rarely accessed by the public. 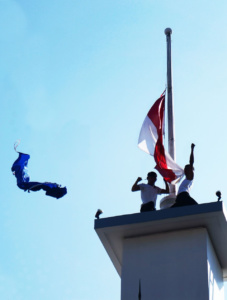 Yet Mr Eddie Samson claims to be an eyewitness himself. He repeatedly stated that he saw with his own eyes how the incident occurred. The problem is, however, that his testimony is in stark contrast with the written testimonies from dozens of other people, both community leaders at that time and ordinary citizens. Even the testimony from a Dutch soldier who was present at the hotel, named Sergeant Lou Balls, is not in accordance with the story of Mr Samson.

In his testimony Mr Eddie Samson emphasizes that Mr. Ploegman, who was the leader of the Indo-Dutch group, chairman of the Indo-Europees Verbond (IEV, Indo-European Alliance), was killed when he crossed the road from the temporary Red Cross office (during colonial times Freemasonry clubhouse “De Vriendschap”, currently the National Land Agency) opposite to the Yamato Hotel. Samson recalls that when Ploegman crossed the road he was suddenly stabbed by the mob [of Indonesian people].

The general picture described in several sources shows that after the Dutch hoisted their flag, the [Indonesian] masses gathered in front of the Yamato Hotel. Only after that the situation became tensed. Thereupon the newly appointed Surabaya resident of the Republic of Indonesia, Sudirman, came to the hotel to negotiate with Mr. Ploegman who was already there. Resident Sudirman told Ploegman and the other Dutch people present that they had to follow the regulation that was previously issued by the Japanese representatives Tianbucho and Kempetaicho. The latter regulation was published in newspaper ‘Soeara Asia’, dated August 21 and 30, 1945. Sudirman told Ploegman that by raising the Dutch flag, they had violated the regulation and asked for the lowering of the flag.

Ploegman’s reaction was: “The Republic of Indonesia does not exist!” After which he went inside the hotel. Soon he returned and pointed a gun at Resident Sudirman. It triggered the reaction from a man named Sidik who kicked the gun out of his hands. Subsequently a severe fight broke out in the hotel lobby. Meanwhile, outside the hotel, Hariyono and Kusno Wibowo managed to climb the tower of the building to tear off the blue part of the Dutch flag. Both Ploegman and Sidik suffered serious injuries and both were brought to the Simpang Hospital. Unfortunately their lives could not be saved. Both of them died a few days later.

Eddie Samson’s account of the events has been widespread, including the 160-page Asia Maior hard cover book titled “Soerabaja, Beeld van een stad” and the Dutch VPRO-documentary “Van Dis in Indonesië” that shows an interview with Samson in which he shares his side of the story. The book of Asia Maior further states that Japanese troops intervened and took control over the Indonesian masses. This is in contrast with most of the Indonesian testimonies that recall that the crowd left after the Dutch flag was removed and the Indonesian red and white flag was hoisted. Jawa Pos newspaper published Eddie Samson’s version of the story on September 19, 2016.

Why is this so important that we need to re-open the discussion again?

Frist, the public easily believes Mr. Eddie Samson’s witness account, because of his position in combination with the general difficulty to access written sources and information about the actors that already died. The students interviewing Mr. Samson share their results on blogs and social media that easily get attention. These online posts spread more easily than the original primary sources.

Whether he realizes it or not, the testimony of Mr. Eddie Samson discredits the character of the Surabaya freedom fighters that were active during the revolution of 1945. In many Dutch publications Indonesian fighters are framed as savages and bloodthirsty: killing innocent Indo-Dutch people that were unarmed.

Consciously or not, Mr. Eddie Samson’s account of the events opposes other testimonies. Yet the dominance of his story indirectly implies that other accounts are incorrect, such as the story of Bung Tomo, M. Jasin Commander of the Special Police, Maj. Gen. (ret) Hario Kecik and several other figures.

Unwittingly, Samson’s testimony has influenced the main historical narrative in Indonesia too, which led to biased information and prejudices against Indonesian revolutionaries.

The Asia Maior book, the Dutch VPRO-documentary with Adriaan van Dis and the Jawa Pos article use one single testimony from Mr. Eddie Samson, without referring to other sources.

The thing is that Eddie Samson at that time was just a kid. He was viewing the event from a distance. He claims himself that he was not allowed to go on the street to see the clash near the hotel. This means that from his position at the Red Cross building, it is impossible that he saw how the situation escalated exactly. The fact that he did not witness the conversation between Sudirman and Ploegman is significant. The arrogant attitude of Ploegman, insulting the Republic of Indonesia and the refusal to lower the Dutch flag, all together led to the violent escalation.

This example shows how colonial views may influence the Indonesian historiography as well. This problem should receive more attention. Without information from Indonesian side that counter Dutch publications, there is the risk that Dutch sources are uncritically interpreted as historical facts that tell the truth. 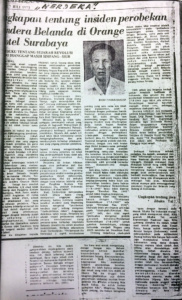 In July 1973, Indonesian veteran Budi Tjokrodjojo, one of the witnesses of the Flag Incident, wrote an article in an Indonesian magazine about the risk of the many false testimonies that were circulating. He expressed the hope that the government and related agencies would organize public meetings and seminars to discuss the event to do justice to the history. Tjokrodjojo’s article is kept in the Leiden Library, and does not mention any follow-up, it seems likely he did not get a response.

Several times we have approached Mr. Eddie Samson to invite him for open discussions. Unfortunately he never accepted our invitation. To be clear: there is nothing personal between us and Mr. Eddie Samson. This is about our fight for historical justice, to restore the good name of the Indonesian heroes that fought for the independence.

Nearly half a century has passed since Budi Tjokrodjojo called for re-opening the discussion about the Flag Incident. The Public Relations department of the local government of Surabaya refused to organize a seminar on this topic. Is it possible that the History Department of Airlangga University finally facilitates such meeting? Hopefully you share our concerns, for the sake of history and the future of Indonesia.