Foreign Affairs minister De Hoop Scheffer requested a clarification from the Indonesian government on statements by Minister of Justice Yusril Ihza Mahendra. Earlier this week he stated he hated the Dutch because of their actions during the colonial period.

Later today, De Hoop Scheffer will contact his counterpart Wirajuda. ”The Dutch should be ashamed”, Mahendra said in an interview with NOS and GPD correspondent Step Vaessen. “Captain Westerling killed more than 40,000 people in Sulawesi. The Netherlands never conducted an investigation.”

Member of Parliament Geert Wilders (VVD, liberal party) sent questions to De Hoop Scheffer about the case. He believes that the [Dutch] government cannot just let it pass when a minister of a friendly country claims to hate the Dutch. His colleague Bert Koenders (PvdA, Labour party) called the statements by Mahendra “inappropriate”. However, his impression is that Mahendra’s statements are mainly meant for domestic use.

Both Wilders and Koenders said to be worried about the establishment of the Sharia, Islamic law in Indonesia which Mahendra supports. “If that will succeed, the fat is in the fire” according to Wilders. “That would be a very bad development”, warns Koenders as well. 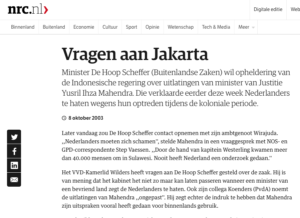 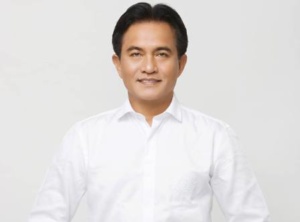