The Racist ‘Sinyo’s’ from the Dutch East Indies

The Dutch East Indies colonial government left Indonesia with segregated groups based on race. As there are Malay, Chinese and Arab kampong districts.

When even the country known as the Land of Freedom (United States of America) also has a racist organization like Ku Klux Klan (KKK) also in the Dutch East Indies colony there were racist groups such as ‘Indo Europees Verbond’ (IEV) and ‘Nationaal Socialistische Beweging’ (NSB). They did not aim to exterminate local indigenous people who were called ‘inlander’, such as what was done by KKK, however they did look down and disregarded indigenous Indonesians. ‘Inlander’ itself is a derogatory nickname for indigenous people, akin to terms such as ‘country bumpkin’, or ‘stupid’. The bottom-line is that they were the lowest class category.

Originally, the Indo (or Eurasian) ethnic group came into existence due to the limited number of Dutch women in the Dutch East Indies colony, which forced the Dutch to marry local indigenous women, often called ‘Nyai’. The children born out of these Dutchmen and Nyai’s were ‘Indo’s’; of which the boys were referred to as ‘Sinyo’ and the girls ‘Noni’. Although their biological fathers were Dutch, their position in the colonial society was still lower than Europeans. At the same time they enjoyed a higher position in comparison to indigenous people and therefore they did not want to be associated with them. That explains why the Indo people founded organizations that acted discriminatively against indigenous people. These Indo’s aimed for equal status with the intention to rule the Indies just like the full blood Dutch did. In short, they themselves wanted to become the masters of the Dutch East Indies colony.

On 13th July 1919 Karel Zaalberg founded the IEV. Initially they intended to fight the racism of ‘totok’ (full-blood) Dutch. Also demanding better living conditions. Yet, at the same time they were quite racist towards indigenous people as well. Of course, not all Indo’s looked down on indigenous people. One example is Eugene Francois Douwes Dekker who, together with Tjipto Mangunkusumo and Ki Hadjar Dewantara, formed the ‘Indische Partij’ in 1913. This political party accommodated all group and races in Dutch East Indies.

Unfortunately, not many Indo shared the idea of Douwes Dekker. The economic interest of Indo made the IEV more popular. “They seem to want the privileges of their fathers side, their own constitution, economic role and other racial privileges… while on the other hand they also want the privilege of their mother side, such as land ownership” said Husni Thamrin, whom himself was also an Indo. According to Thamrin, many Indo’s were spoiled. They complained that their wellbeing was edged out by the indigenous. However in reality, the Indo’s were more likely to be white-collar workers. They were not coolies.

Later on a commission called ‘Spit’ was formed, after pressure from a prominent Indo Dick de Hoog, in order to pass the law that benefitted the Indo’. This commission was active from 1931 until 1936.

Meanwhile, some Dutch Indo also joined NSB, a socialist-nationalist group akin to NAZI in Germany. NSB was founded in Utrecht in 1931. In that period the Dutch East Indies branch of NSB collected a lot of money: 55,000 Guldens in 1937. According to the book “Kolaborator NAZI” (2008) there were 2,000 NSB-members in the Dutch East Indies of which 70 percent were Indo. Unfortunately for these Indo’s, the Nazi Fuhrer in Germany issued a verdict that Aryan racial purity is imperative, only they could join Nazi affiliated groups. Therefore Eurasians were expelled from NSB in 1936. Not long after that the [Dutch] colonial government categorized NSB as a dangerous organization.

The racist attitude of Dutch and Indo in Indonesia during the colonial era cannot be perceived through the cruelty of the Nazi-affiliated organization only. At that time, the Dutch East Indies colonial government also had its own classing of citizenship. First-class citizens were Europeans, the Chinese and Arabs became second-class, while indigenous Indonesians were third class. Besides this categorization, there was also a segregating policy where people had to live in neighborhoods (kampongs) based on ethnicity. That is the reason why there are Malay, Arab and Chinese kampongs etc. Similar to what was done in South Africa by Europeans of which some were of Dutch descent.

In the latter country the segregation policy was named ‘apartheid’, which was introduced in 1930 and ended in 1990. The black South Africans suffered in their own homeland. It is this policy that Nelson Mandela had to fight against and for which he was put in prison for almost two decades. Besides that colonial racism in the Dutch East Indies was also visible in the prohibition for indigenous people to enter Societies (Exclusive Clubhouses) or swimming pools where the sign read: “Verboden voor honden en inlanders”, which means: “No entry for dogs and indigenous people”.

Other discrimination existed in the military: the salary for low rank indigenous soldiers was almost half of the Europeans. Outside the military, the salary of indigenous employees was always lower than the Dutch with similar rank and positions. In daily life, the white people were superior.

One day in 1935 Mr. Dessauvagie, the head of IEV Bandung, delivered a speech at the City Council in which he marginalized the indigenous people by arguing that “inlanders are equal to 30 million buffaloes.” Mr. Roosseno, the head of Parindra faction in Bandung was listening and immediately protested. Thereupon Roosseno, who contributed to the country as engineer in the field of construction, was moved to Kediri. Indeed it was not a good time for indigenous ‘inlanders’ in that era. Not just Roosseno also the composer of the Indonesian National Anthem, Wage Rudolf Supratman became victim [of racism] when he was being mocked as “dirty inlander.”

The arrogance of the Indo’s during the colonial period became a political tinderbox, which exploded into violence after the proclamation of independence in 1945. Many of them became victim of the revenge by republican youths who were violent, angry and equally racist during the Independence war that lasted from 1945 until 1949. According to Hans Meijer, in his book ‘In Indië Geworteld: De Twintigste Eeuw’ (2004) almost 200,000 Indo people fell victim to rampaging republican youths. 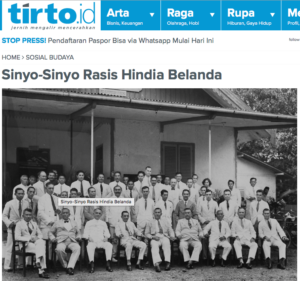 [Originally published in Indonesian. Translated by Bagus Widyanto. Please send us an e-mail if you think you can improve the translation: info@historibersama.com]