The last living Ambonese KNIL soldiers are officially welcomed by the Ministry of Defense. The Dutch Inspector General of the Armed Forces Hans van Griensven will meet them next month. The Moluccan community in the Netherlands sees it as a form of recognition.

What will be discussed is whether ex-soldiers, who are entitled to medals but never received any, can still be awarded after all. All veterans are officially entitled to the status of veteran, but so far not all of them requested this. The Dutch Ministry of Defense will assist them.

Leo Reawaruw from the Moluccan action group ‘Maluku4Maluku’ says in Dutch newspaper De Telegraaf that it is a historical breakthrough. “KNIL soldiers fought for the fatherland too but never got the recognition they deserve.”

Last year, the Dutch government decided to pay overdue payments to KNIL military and Dutch East Indies officials. This was also seen as a form of recognition.

The Royal Dutch-Indies Army (Koninklijk Nederlands Indisch Leger) was the Dutch colonial army that existed from 1830 to 1950. The KNIL soldiers had to fight against Indonesian freedom fighters. When the Netherlands lost the war and Indonesia became independent, they came to the Netherlands in 1951. They did not leave because they wanted to but because they could no longer stay in the independent country Indonesia as they were seen as collaborators there.

The idea was that their stay in the Netherlands was only temporary. The soldiers were housed, together with their families, in special camps. Since then they had been fighting for official recognition and the official veteran status. A difficult issue since the Dutch government does not want to meet most of their wishes and demands.

The feeling of being neglected and ignored is deeply rooted within the Moluccan community. It led, for example, to the hostage cases in trains and a school in Drenthe in the 1970s, by which the second generation tried to force concessions from the Dutch government.
—
[Originally published in Dutch. Translated by Marjolein van Pagee. Please send us an e-mail if you think you can improve the translation: info@historibersama.com] 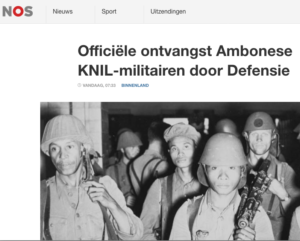