Rejecting the Republic because of Colonial Nostalgia

Many former colonial employees wished to return to ‘Zaman Normal’ (lit. Normal Era, colonial times); they did not favour independence. Some felt bound by an oath of loyalty to the Queen of the Netherlands. 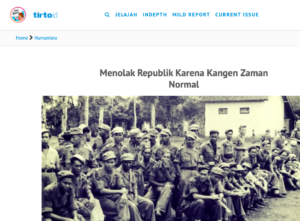 “In the early years of independence, people would refer to the pre-war colonial period as the Zaman Aman (Peaceful era) or Zaman Normal, as if the Dutch East Indies had become a haven for peace and tranquillity,” wrote Frans Hüsken in the Orde Zonder Order:Kekerasan dan Dendam di Indonesia 1965–1998.

Misbach Yusa Biran, who was born during the colonial era, wrote in his book Keajaiban di Pasar Senen: “Zaman Normal (is) the term used by the elderly people to refer to the Dutch colonial era.”

The elderly people, who lived a comfortable life during the colonial era and later had to experience difficulties during the Japanese occupation and Indonesian independence periods, also referred to that period as Zaman Normal.

According to Justian Suhandinata in WNI keturunan Tionghoa dalam stabilitas ekonomi dan politik Indonesia, “Native people favoured seats and comfortable positions in the government, meanwhile the Peranakan were content with their employment in the private companies” during Zaman Normal.

“The priyai-culture (aristocrats) was still solid. During Zaman Normal, native bureaucrats had decent lives, although not in a hedonistic sense, they were also well respected” said David H. in Menembus Batas: Damai Untuk Semesta.

During colonial times, the social hierarchy of the priyai was higher than the common people. In some areas, it was customary for common people to behave politely and submit to the priyai.

The Indonesian revolution for independence, which involved a social revolution, has demolished this feudalistic order. Kardinah, the sister of Kartini, also became the victim of the social revolution. Kardinah was paraded and humiliated in front of the public.

On the other hand, the revolution also paved the way for an illiterate individual to become a highly respected military commander, take Abdullah for example, who later had an Indo wife. Or common people like Soeharto who later married a priyai daughter named Hartinah alias Tien Soeharto.

During Zaman Normal, the latter would not have been allowed. The Indos had a higher social status, as did the priyai. Whilst priayi were victimised during the social revolution, The Indo people had a similar experience during the “Bersiap period” which took place at the beginning of the Indonesian war for independence. Because of these unfortunate events, they considered the Republic of Indonesia incapable and without future, they did not feel the urge to support it.

For some native Indonesians who previously worked in the [colonial] government and military, Zaman Normal was indeed the period of comfortable lives.

Didi Kartasasmita, a former first lieutenant in the colonial army of the Koninklijk Nederlandsch Indisch Leger (KNIL), said in his autobiography, Didi Kartasasmita: Pengabdian Bagi Kemerdekaan, that his monthly salary was around 350 guilders during the Zaman Normal. After that peaceful period ended due to the arrival of the Japanese, his life was hampered by difficulties. He no longer received the same amount of monthly wages.

Indonesia later became an independent nation after the Japanese surrendered. Following that event, some wished to return to Zaman Normal. “Those who had previously worked in the BB (Binnenlands Bestuur, Dutch Domestic Administration), or worked asbabu (housemaid), wished to retain their job again,” wrote Toeti Kakiailatu in B.M. Diah: Wartawan Serba Bisa.

The opportunities were there. The Netherlands Indies Civil Administration (NICA), a provisional government formed by the Netherlands in the former Dutch East Indies, also needed them again.

Didi agreed with Wardiman regarding this matter. According to Didi, “The personnel recruited in the Netherlands was not enough to meet the demands. Because of that, the strength and military abilities of the Dutch colonial army were very limited.” Didi was a former KNIL officer during colonial times. After Indonesian independence, he encouraged former KNIL officers to support the Republic.

The Dutch, on the other hand, were successful in assuring thatSoeriosentoso, Soerjobroto, Soewondo, PoerboSoemitro, and Sultan Hamid II supported their side. All of them were senior KNIL officers from Javanese priayi background, except for Sultan Hamid II. While Sultan Hamid II lived in an internment camp, many of those officers lived outside the camp albeit under the strict supervision of the Japanese Army. On average, these KNIL-officers reachedthe rank of Colonel in 1950.

The failed attempt of the colonial regime to recolonise the Dutch East Indies turned into a nightmare for those who had supported the Netherlands. The colonial employees, who held high positions before the war, feared to lose their comfortable lives. Retired employees were also frightened to lose their pensions.

The plantation owners, who were mostly Europeans, did not benefit from the independence because they were going to be strangers on their plantations thatemployed native Indonesians. Therefore, it was not surprising that during the run-up to the rebellion of the Legion of Ratu Adil in 1949, Westerling was considered a hero to these people. According to a report by the Jawatan Kepolisian Negara on 21 February 1950, concerning Westerling’scoup attempt, a British plantation owner in Bandung, whose name was Tom, called Westerling “a Big Fellow.”

Apart from the involvement of KPM and those other groups, according to the same report, large companies who were notoriously known as The Big Five such as Lindeteves, Javastaal, Le Wehry, Borsumij, and BPM, also funded Westerling’s actions during 1949-1950.

In his book Soldaat in Indonesië, 1945-1950, Gert Oostindie quoted a confession of a Dutch soldier named Jan van Tright who wrote in mid-1947: “The people want rice, order, and legal certainty. Those things wouldn’t happen as long as the Republican leaders are in charge. Everything would be in disorder. There are murders and looting everywhere.”

From their perspective, the Zaman Normal was more favourable than the formation of the Republic of Indonesia because [they knew] it would cost them their comfortable and luxury lives under the colonial regime.
—

The Priyai, Europeans, and plantation owners wished to return to ‘Zaman Normal’ in the Dutch East Indies