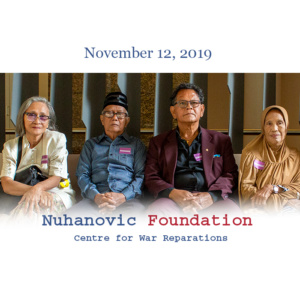 On Tuesday November 12, the Nuhanovic Foundation organized a seminar on the impact of the court cases initiated by Jeffry Pondaag, chairman of the Komite Utang Kehormatan Belanda (K.U.K.B., the Dutch Debt of Honor Committee). Since 2008, through K.U.K.B. and with legal support of lawyers Liesbeth Zegveld and Brechtje Vossenberg, Indonesian victims of Dutch atrocities successfully sued the Dutch State. The atrocities were committed by the Dutch Army in their attempt to recolonize Indonesia (1945-1949) after the country already proclaimed its independence on August 17th, 1945.

During the seminar the Nuhanovic Foundation presented their latest report (in English): “The impacts in relation to systematic and large – scale atrocities committed by the Dutch Military Forces in the ‘Dutch East Indies’ between 1945-1949″. The Foundation’s director Frederiek de Vlaming assigned Anne-Marie de Brouwer and Eefje de Volder (IMPACT) to conduct research on the larger impact of these civil proceedings.

In fact, the court cases did not only result in apologies and compensation for Indonesians, they also re-opened the discussion in the Netherlands on how to deal with the colonial past. In 2016 the Dutch government decided to finance a new large-scale investigation into the Indonesian war of Independence. The project costs 4.1 million euros and is expected to be finished in 2021. At the same time the project received severe criticism by Jeffry Pondaag and Francisca Pattipilohy. After the project was launched in 2017 they sent the Dutch government an open letter, signed by 144 people. The letter, among others, addresses the double role of the Dutch Institute of Military History (NIMH) that assists the Dutch State in rejecting the K.U.K.B.-claims.