‘Rutte, make sure that the aftermath of the decolonization war is settled quickly’

This Monday a series of court cases starts in The Hague after legal claims by Indonesian in relation to Dutch violence during the decolonization war (1945-1950). The lawyer of the victim’s relatives, Liesbeth Zegveld, urges the government to come up with a new civil settlement. “This is something where Rutte can play a role.”

Dutch Prime Minister Mark Rutte (VVD) did not put enough efforts into resolving the legal aftermath of the decolonization war in Indonesia (1945-1950). Lawyer Liesbeth Zegveld, who is responsible for dozens of legal processes against the Dutch state on behalf of civilians, argues in NRC that the number of claims against the state is growing but that at the same time the government’s willingness to reach a generic settlement has decreased. There are dozens of procedures in the court in The Hague by widows of men who at the time were killed without trial. A new category of victims, the now elderly children of those men, also submitted claims. 76 of these cases have now been taken into process.

Zegveld, who successfully claimed compensation from the state for the group of Rawagede widows in 2011, received applications from about five hundred children of men who were killed by Dutch soldiers. Relatively new is also the case of an Indonesian freedom fighter, Yaseman, who claimed to have been tortured by Dutch soldiers at that time. He also demands compensation from the Dutch state. On this case – and all other ‘Indonesian legal processes’ – a court hearing will be held on Monday in front of the court in The Hague, in order to reach an agreement between the two parties about the hearing of this man.

Yet Zegveld observes, “a lack of political will” from the side of Rutte in resolving the issue politically. “Things are treated differently than under Minister Timmermans (Foreign Affairs 2012-2014, PvdA). At that time, under his leadership, a civil settlement was created for widows from Rawagede and Sulawesi. However, now we are dealing with endless hassles in individual cases. This is especially something where Rutte could play a role.” Zegveld refers to the performance of the premier last year when he was interviewed for the television show ‘Zomergasten’. “He was being asked whether it was not strange that Dutch cases of war crimes in Indonesia got expired, while the prosecution of war crimes from the Second World War were continued. Rutte did not answer that question. He said he had to do research. He ignored it deliberately and that is very bad.” 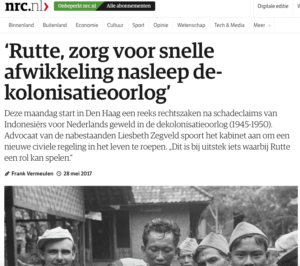