Between pride and apologies, the Dutch are not yet ready to repair

Across the flat Dutch landscape there are mixed signals when it comes to dealing with colonial crimes. On one hand court cases, apologies from the King, and a national museum re-examining its own treasures in the light of slavery. On the other, a resistance to re-examine the past. 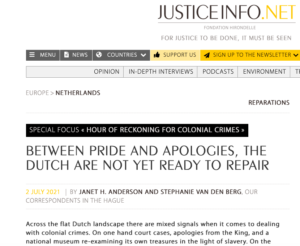 “There was no formal cover up. It was just a social habit, that you did not touch in depth the issue of what happened in the colonies,” says Maarten Hidskes, author of Thuis gelooft niemand mij [‘At home nobody believes me’] and researcher into the crimes committed by Dutch Special Forces in Indonesia during the war of independence during the 1940’s.

It’s more than 75 years since Indonesia declared itself independent from the Netherlands, but still, “everyone has his own family story,” connected to the colony, he says. Hidskes’ own father was one of the “young guys”, twenty-three or four years old who volunteered to join the special troops to put down what was seen as a rebellion on the island of Sulawesi. Their commander Raymond Westerling became later notorious for his lack of remorse for “executing criminals”, and – according to some accounts – for having warned the recruits all about the bloody nature of the job they would be expected to do. The military actions only lasted twelve weeks, but the numbers of deaths over this whole period are striking.  Official estimates are that 150,000 Indonesians and 5,000 Dutch died in the independence wars.

In recent years, Dutch lawyer Liesbeth Zegveld took the state to court to demand reparations for 431 men killed by Dutch soldiers in a massacre in the village of Rawagede in December 1947. In 2011 the government finally settled the case, and villagers were compensated. “First the Dutch state tried to say we were too late, but when the court rejected that argument, they started to contest all the facts we presented,” she recalls. As the cases – because there were dozens of colonial crimes cases filed – dragged through the court system, the public debate around them began to change. “The cases were kind of the starting point,” for a change in public perception, Zegveld says, which had a knock-on effect on the attitude of the Dutch state which stopped “contesting every little detail”.

Swiss-Dutch historian Rémy Limpach followed up with De brandende kampongs van generaal Spoor [‘The burning villages of general Spoor’] in 2016, which showed that Dutch troops systematically used excessive force. “For the really first time, his conclusion is that the violence of the colonial power was structural. It was policy,” notes Frederiek de Vlaming, director of the Nuhanovic Foundation. In 2020, the Dutch King apologised for the Dutch forces killings at the time. And in February 2022, the results will be presented of a big research programme backed by the Dutch authorities called “Independence, decolonisation, violence and war in Indonesia 1945-1950” – the end of its colonial period in Indonesia.

“The Dutch are most proud of their former empire”

Will more facts from researchers change the ways that the Dutch public see what happened, and acknowledge the reality of the war crimes? Hidskes has more faith in the power of a recent fictional film De Oost [‘The East’], proving highly popular, for which he helped with the scenario. He says the “massive exposure of the movie and the presentation of the violence forces the main general public to at least discuss the matter”. He points to online forums where “people are saying to each other, hey, you have to see the movie. It’s about your family, you know, see the movie”.

Opinion polls though suggest that changing attitudes is an uphill battle. A 2020 YouGov poll showed that “The Dutch are most proud of their former empire, even more than the British”. “Half of Dutch people say the old empire – of which Indonesia and part of South Africa were the most significant territories – is something to be more proud of than ashamed of, with another 37% saying they are neither proud nor ashamed. Only 6% believe the empire is something to be more ashamed of than proud”.

Dutch museums are grappling with changing attitudes and how to present what they call “contested heritage”. At the Amsterdam Museum, artistic director Margiet Schavemaker had to deal with what she calls possibly “the most contested piece of heritage”: the iconic Golden Carriage, a ceremonial horse-drawn carriage with images celebrating the Netherlands’ former rule, traditionally used by the Dutch royal family on state occasions.

The gilded wooden carriage was built in 1898 and is decorated on one side with a panel called “Tribute of the Colonies”, which shows Black and Asian subjects bringing offerings to a white woman on a throne representing the Netherlands. It has been undergoing restorations since 2015 and the public debate around glorifying the colonial past is making its future as a royal mode of transport uncertain.

The Amsterdam Museum has taken care to present the carriage in context and not shy away from the controversy. Schavemaker, who is also professor of media and art in museum practice at the University of Amsterdam, says she hopes the decision to exhibit it would prove that showing this controversial piece “will not cause bigger polarisation but that it can be situated so people come together and have a dialogue”.

It has taken a long time for the Netherlands to face the possible downsides of colonialism, she says. “We are a country with a national identity based on the idea that we are very tolerant and very open,” she explains. “At the same time, we do not want to acknowledge there is racism and there is structural inequity.” She hopes museums can be “agents of change” and foster dialogue.

At the Rijksmuseum in Amsterdam, a new exhibition features objects from the collection, re-examined to tell the history of empire, trade and slavery. Dutch tentacles as slave traders and colonists spread far during the 14th and 15th century. One striking room in the exhibition chronicles the persons given the Dutch name van Bengalen – taken from the Bay of Bengal – trafficked to South Africa, Surinam, Brazil, the Netherlands, for labour.

Reparations for slavery: not that simple

The four largest cities in the Netherlands – The Hague joined in only this week – have called on the government to support research into their connections to the slave trade. They want a national day of remembrance. July 1 is being suggested. 2023 will mark 150 years since abolition.

Between the 15th and 19th century European slave traders transported some 12 million slaves across the Atlantic Ocean including some 600,000 on Dutch ships, according to the Dutch state’s official historical canon of facts to teach schoolchildren. In the 17th century the Dutch republic was briefly the largest slave trader. And while the republic’s involvement decreased later, slavery was still an important economic driver. Some 19 percent of imported goods were made by enslaved people and an estimated 5 percent of the national economy around 1770 was taken up by ‘slave-related activity’.

Zegveld is looking into potential cases for reparations for Dutch responsibility for slavery, “but a ready-made case, if such a thing ever exists, is not there yet,” she says. She notes the contrast that a public debate around reparations already exists, even without court cases, rather than the way Indonesian colonial cases helped to force open the issue.

Another comparison is with Zegveld’s work on compensation for Holocaust survivors, where a lot of evidence remained of how the Dutch train company forced victims to pay for the train fare to be brought to detention camps and later concentration camps. “With slavery you are taking about descendants who have generational suffering, but the specific damage they have from slavery is hard to establish in a tangible way,” Zegveld explains. How a court can quantify psychological suffering and the impact of social position and extreme poverty would be one of many factors that would come into play. “If It was simple somebody would have come forward with a case”, she says.

Hidskes is working with Indonesian counterparts to research further and understand the stories – what he calls “multiple histories” – of those who experienced colonial rule: “these stories are completely unknown in the Netherlands”, he says. He recalls that in the 90’s he felt shocked, “insulted” even, by those criticising the colonial army. But now, “I try not to condemn my father, not to convict him, but also not to defend him.”
—