In the ruling, the [Dutch] court [in The Hague] acknowledged that the use of torture methods was “very likely.”
The Dutch government was ordered to pay compensation worth IDR 125 million.

However, the Dutch Government is now appealing against the court ruling in The Hague. The latter attitude made Yaseman’s family and lawyer angry.

“It is a known fact that the Netherlands engaged in large-scale torture during the independence war,” said his lawyer in Amsterdam, Liesbeth Zegveld.

“Of all the victims, only one has registered with the court, and that is Mr Yaseman.

“It is a shame that the state will not take responsibility, even for this one case,” Zegveld said, as quoted by abc.net.au on Sunday, December 9, 2018.
— 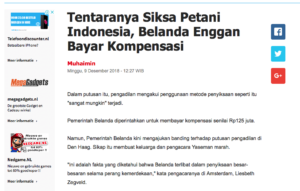